12 Summer Escapes: Books on Earth’s Climate and Beyond 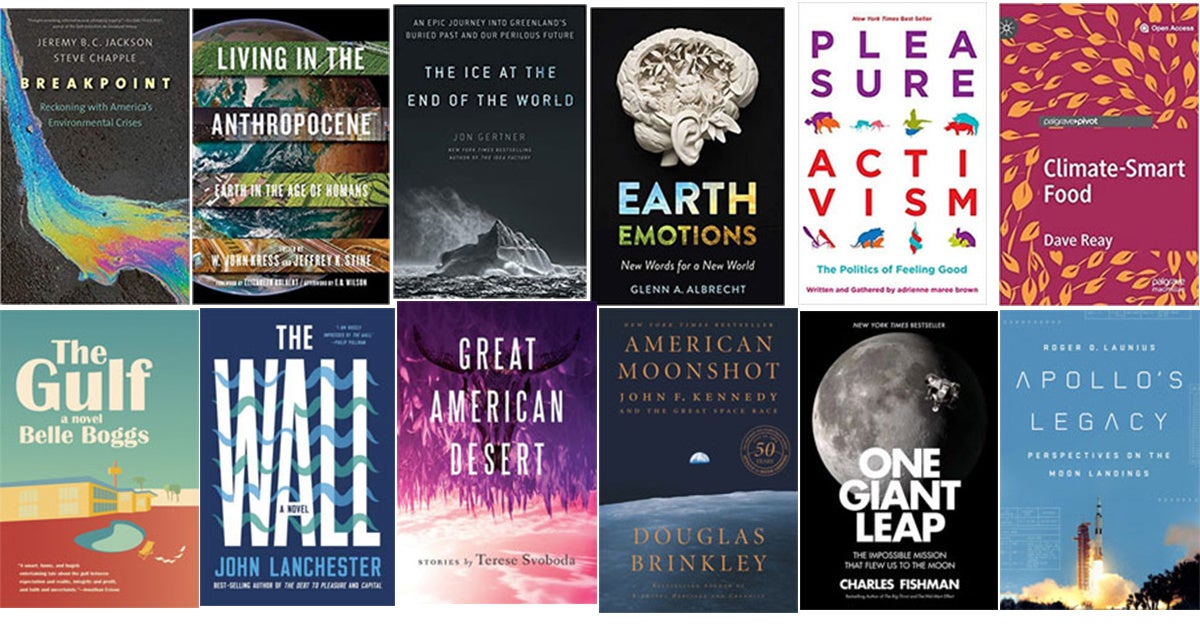 August is prime time for escape reading. But that designation need not be limited to fiction; books written for the general reader on topics outside one’s area of expertise can also provide passage to exciting new places.

This month’s bookshelf includes nine non-fiction titles, two novels and one collection of short stories. Three of the non-fiction books re-examine NASA’s space program, and its cultural legacy, in commemorating the 50th anniversary of the Apollo 11 moon landing on July 20.

As with previous YCC bookshelves, the descriptions are drawn from publishers’ catalogue copy. When two dates of publication are provided, the second marks the release of the paperback.

Eminent ecologist Jeremy B.C. Jackson and award-winning journalist Steve Chapple traveled the length of the Mississippi River interviewing farmers, fishermen, scientists, and policymakers to better understand the mounting environmental problems ravaging the United States. Artfully weaving together independent research and engaging storytelling, Jackson and Chapple examine the looming threats from recent hurricanes and fires, industrial agriculture, river mismanagement, extreme weather events, drought, and rising sea levels that are pushing the country toward the breaking point of ecological and economic collapse. With a passionate call to action, they look hopefully toward emerging and achievable solutions to preserve the country’s future.

Living in the Anthropocene: Earth in the Age of Humans, edited by W. John Kress and Jeffrey K. Stine (Smithsonian Books 2017, 208 pages, .95)

Although we arrived only recently in Earth’s timeline, humans are driving major changes to the planet’s ecosystems as billions of people compete for air, water, food, and shelter. These changes have become so noticeable on a global scale that scientists believe we are living in a new chapter in Earth’s story: the Anthropocene. Living in the Anthropocene: Earth in the Age of Humans explores the environmental and biological systems that have been affected; reviews the causes of the Anthropocene, such as agricultural spread, pollution, and urbanization; shows how societies are responding and adapting to these changes; and surveys how these changes have been represented in art, film, television, and literature.

The Ice at the End of the World: An Epic Journey into Greenland’s Buried Past and Our Perilous Future, by Jon Gertner (Penguin Random 2019, 448 pages, .00)

The ice sheet that covers Greenland is 700 miles wide and 1,500 miles long, and contains nearly three quadrillion tons of ice. As this ice melts and runs off into the sea, it not only threatens to affect hundreds of millions of people who live in coastal areas, it will also have drastic effects on ocean currents, weather systems, economies, and migration patterns. In The Ice at the End of the World, Gertner chronicles the unfathomable hardships, amazing discoveries, and scientific achievements of the Arctic’s explorers and researchers with a transporting style – and a keen sense of what this work means. The melting ice sheet in Greenland is, in a way, an analog for time. It contains the past. It reflects the present. It can also tell us how much time we have left.

Want to extend the chill? See also The End of Ice: Bearing Witness and Finding Meaning in the Path of Climate Disruption, by Dahr Jamail (The New Press 2019, 272 pages, .99).

As climate change and development pressures overwhelm the environment, our emotional relationships with Earth are also in crisis. Pessimism and distress are overwhelming people the world over. Australian environmental philosopher Glenn Albrecht examines our positive and negative Earth emotions. He introduces us to the many new words needed to describe the full range of our responses to the emergent state of the world. We need a hopeful vocabulary of positive emotions, he argues, so that we can emerge from environmental desolation and reignite our millennia-old biophilia – love of life – for our home planet. Albrecht proposes a dramatic change from the human-dominated Anthropocene to an era founded on symbiotic science.

How do we make social justice the most pleasurable human experience? Author and editor Adrienne Maree Brown finds the answer in something she calls “pleasure activism,” a politics of healing and happiness that explodes the dour myth that changing the world is just another form of work. Drawing on the black feminist tradition, she challenges us to rethink the ground rules of activism. Her mindset-altering essays are interwoven with conversations and insights from other feminist thinkers. Together they cover a wide array of subjects – from sex work to climate change, from race and gender to sex and drugs – building new narratives about how politics can feel good and how what feels good always has a complex politics of its own.

Climate Smart Food follows a day’s worth of food and drink to see where it comes from, how far it travels, and the carbon price we all pay for it. From our breakfast tea and toast, through break-time chocolate bar, to take-away supper, Dave Reay explores the weather extremes the world’s farmers are already dealing with, and what new threats climate change will bring. Readers will encounter heat waves and hurricanes, wildfires and deadly toxins, as well as some truly climate-smart solutions. In every case there are responses that could cut emissions while boosting resilience and livelihoods. Ultimately, our decisions on the food we buy and how we consume it send life-changing ripples through the global web that is our food supply.

Marianne is in a slump: barely able to support herself teaching, not making progress on her poetry, about to lose her Brooklyn apartment. When her novelist ex-fiancé, Eric, and his venture capitalist brother, Mark, offer her a job directing a low-residency school for Christian writers at a motel they’ve inherited on Florida’s Gulf Coast, she can’t come up with a reason to say no. But the strings that come along with the position become increasingly problematic, especially as Marianne grows closer to the students. As a hurricane bears down on the school, Marianne is faced with the consequences of her decisions. With sharp humor and deep empathy, in this timely debut novel Belle Boggs plumbs the troubled waters dividing America.

Ravaged by the Change, an island nation has built the Wall – an enormous concrete barrier around its entire coastline. Joseph Kavanagh, a new Defender, has one task: to protect his section of the Wall from the Others, the desperate souls who are trapped amid the rising seas outside and are a constant threat. Failure will result in death or a fate perhaps worse: being put to sea and made an Other himself. Beset by cold, loneliness, and fear, Kavanagh tries to fulfill his duties to his demanding Captain and Sergeant, as he grows closer to his fellow Defenders. The Wall blends the most compelling issues of our time – rising waters, rising fear, rising political division – into a suspenseful story of love, trust, and survival.

50th Anniversary of the Apollo 11 Mission

On May 25, 1961, JFK made an astonishing announcement: his goal of putting a man on the moon by the end of the decade. In this engrossing epic, Douglas Brinkley returns to the 1960s to recreate one of the most exciting and ambitious achievements in the history of humankind. American Moonshot brings together the extraordinary political, cultural, and scientific factors that fueled the birth and development of NASA and the Mercury, Gemini and Apollo projects, which shot the U.S to victory in the space race against the Soviet Union at the height of the Cold War. A vivid chronicle of one of the most turbulent eras in the nation’s history, American Moonshot is an homage to scientific ingenuity, human curiosity, and the American spirit.

One Giant Leap is the sweeping, behind-the-scenes account of the furious race to complete one of mankind’s greatest achievements. It’s a story filled with surprises – from the item the astronauts almost forgot to take with them (the American flag), to the extraordinary impact Apollo would have back on Earth, and on the way we live today. Charles Fishman introduces readers to the men and women who had to solve 10,000 problems before astronauts could reach the Moon. One Giant Leap is the captivating story of men and women charged with changing the world as we knew it – their leaders, their triumphs, their near disasters, all of which led to arguably the greatest success story, and the greatest adventure story, of the twentieth century.

In 1961, President John F. Kennedy challenged the United States to land astronauts on the Moon by the end of the decade. NASA met that challenge with the Apollo program; Apollo astronauts managed to both make a total of 11 spaceflights and walk on the Moon. In Apollo’s Legacy, space historian Roger D. Launius explores the many different stories told about the Apollo program’s meaning. Taking into account these opposing perspectives and situating the program in its cultural context, Launius offers a nuanced take on Apollo. Throughout the book, Launius weaves in stories from important moments in Apollo’s history to draw readers into his analysis. Apollo’s Legacy is a must-read for space buffs looking to get a new angle on a beloved cultural moment.