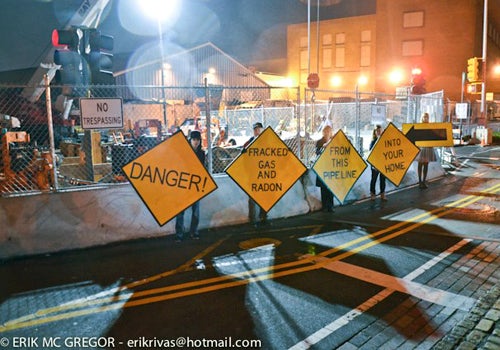 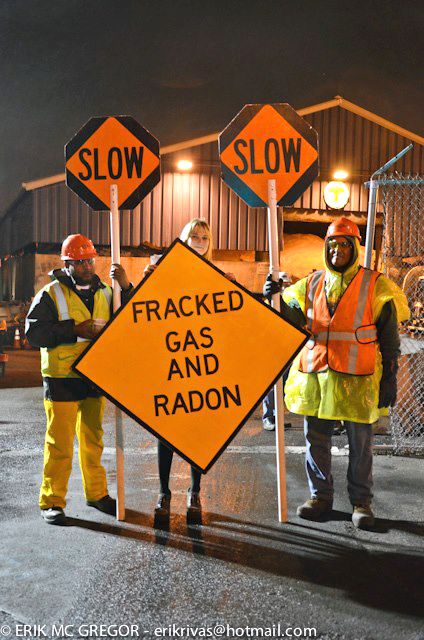 Monica posing with employees of the Department of Sanitation who are having their workplace turned upside down from Spectra nosing its way into our city. Photos by Erik McGregor.

A hard rain was falling on Monday night as Occupy the Pipeline activists spread out along New York’s Hudson River Park, in front of the site where workers in orange day-glow vests have been laboring around the clock on the New Jersey-New York Expansion Project. Known colloquially by the name of its builder, Spectra Energy, the Spectra Pipeline will pump fuel hydraulically-fracked from Pennsylvania’s gas fields into New York City.

The very real risk of explosion along the densely populated regions through which the pipeline passes have made local residents want nothing to do with the project, as evidenced by letters submitted to the Federal Energy Regulatory Commission during the pipeline’s approval process. Only 22 of the 5,000 letters were in favor of the project.

The Spectra Pipeline is just one of a new breed of high pressure pipelines being built around the country to expand the gas market to meet the increasing output of U.S. shale production. According to a filing with the Securities and Exchange Commission on Oct. 18, 2011, Spectra Energy entered into a $1.5 billion revolving credit agreement with the likes of JPMorgan Chase, Citibank, Royal Bank of Scotland, Bank of America and Wells Fargo. Through what’s known as a syndicated loan, Wall Street infused Spectra with capital and spread the financial risk around, while leaving the risk of possible explosion for local residents to bear.

On Oct. 15, Occupy the Pipeline activists wrapped themselves in yellow caution tape as they stood in front of the pipeline construction site. They had black-and-white skeleton makeup on their faces—representing, they said, the danger of fossil fuels turning humans into fossils—which was bleeding down their chins because of the rain. The tape woven around the bodies of those on the line served as a symbol of interconnectivity.

“We are all connected through a web of toxic pipelines,” Occupy the Pipeline organizer Monica Hunken cried out through the people’s microphone, “but we are also connected by a vision for safe and sustainable world.”

Seeing their local fight against Spectra as a microcosm of a broader battle, Occupy the Pipeline put out a call several weeks earlier for those opposing America’s fossil fuel beef-up to join them in a day of action. In Texas, activists who have been carrying out direct actions against the Keystone XL didn’t need much prodding. On #O15, as the date has been called, 50 people stood in the way of the pipeline that NASA climate scientist James Hansen has told the New York Times means “game over” in the fight against climate change. 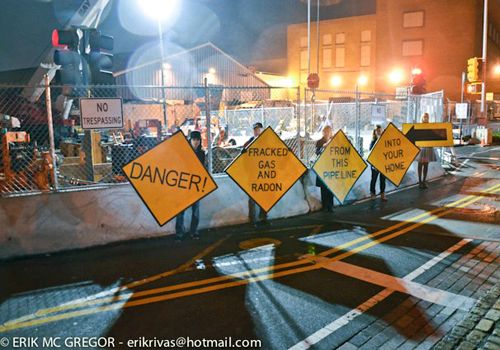 The Keystone XL is designed to bring heavy crude oil from a deforested region in Alberta, Canada, to export markets along America’s Gulf Coast. After more than 1,000 people were arrested sitting-in at the White House against the pipeline in the summer of 2011, and thousands formed a ring around the White House last November, President Barack Obama announced in January he was nixing approval of the pipeline until after the 2012 election. Quietly, however, his administration gave the go-ahead for construction of the XL’s southern portion.

During a stump speech in Cushing, Oklahoma—a town known as the “Pipeline Capital of the World”—Obama disputed claims that he was a softhearted environmentalist. “We’ve built enough pipeline to encircle the earth and then some,” he told the Cushing crowd. Writing at Grist, shortly after Obama’s Department of the Interior issued four coal mining leases for the Powder River Basin in 2011, Glenn Hurowitz summed up the president’s “all of the above” energy policy as “effectively using modest wind and solar investments as cover for a broader embrace of dirty fuels.” It’s a trick straight out of BP or Chevron’s playbook, writes Hurowitz, to “tout modest environmental investments in multi-million dollar PR campaigns, while putting the real money into fossil fuel development.” But these days Obama does not appear to be playing down his enthusiasm for coal, gas and oil.

While the U.S. under Obama’s leadership is deepening its reliance on fossil fuels, greenhouse gas emissions have led the climate and the human race along with it into what Mark Serreze, director of the National Snow and Ice Data Center (NSIDC), calls “uncharted territory.” Data collected by Serreze and fellow researchers in September shows that 1.32 million square miles of arctic ice cover withered away over the summer, more than in any year previously on record. The team had anticipated a record melt, but the scope of this year’s de-icing far exceeded its expectations. “While we’ve long known that as the planet warms up,” reported Serreze, “few of us were prepared for how rapidly the changes would actually occur.”

Fortunately for those concerned about the impact of fossil fuels on the biosphere, opposition to the escalating rate of ecological devastation has entered “uncharted territory” as well. In what has been termed a “Summer of Solidarity,” actions against ecological devastation took place in numerous regions across the U.S. 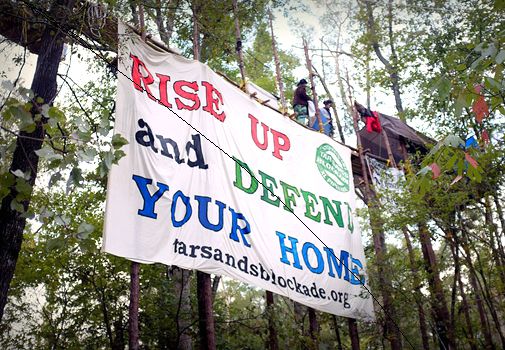 More than 50 blockaders risked arrest to stop Keystone XL construction in Texas and bring attention to TransCanada’s repression of journalists attempting to cover the blockaders’ side of the story.

As thousands marched in the first national rally against fracking in Washington, D.C., 50 people walked onto the country’s largest mountaintop removal site in West Virginia and shut it down. Union workers locked out of the Pilgrim nuclear plant in Plymouth, Massachusetts, picketed beside environmentalists. In New York, Occupy the Pipeline challenged Spectra through sit-ins and lockdowns, while Puerto Rican activists battled (and halted) a natural gas pipeline through a campaign in which both islanders and the mainland diaspora took part.

Actions in the U.S. were inspired by bold and brazen acts of ecological defiance globally including the occupation of the massive Bela Monte Dam in Brazil’s rainforest by indigenous tribes amidst the Rio+20 climate conference and a weeklong blockade of the Olympic Dam uranium mine in South Australia. All the while in Texas, lockdowns and tree-sits against Keystone XL took off one after another.

In Massachusetts, where Spectra Energy is attempting to soup up the Algonquin Gas Transmission line, activists with 350.org and the Better Futures Project met the #O15 call with a tree-sit near Boston. They held banners reading, “TransCanada, You Shall Not Win” and “In Unity With @KXLBlockade & @occupy_pipeline.”

“We leave the ‘Summer of Solidarity’ with friends still sitting in tree tops, with the direct actions of thousands still reverberating, and we enter the ‘Autumn of Unity,’” Monica Hunken told the soggy crowd back in New York. As the effects of climate change become more acute Hunken expressed hope that those resisting it will forge stronger ties with one another.

During Occupy Wall Street’s anniversary weekend in New York, I spoke to Sam Rubin, an anti-fracking activist from Ohio who was in town to storm the Stock Exchange. Then, last Sunday, Rubin and comrades blockaded a fracking site in eastern Ohio, ahead of the #O15 day of action. While in New York last month, Rubin told me that he hails from an area outside of Cleveland hit hard by the recession, where U.S. Steel recently reopened a plant for the first time in two years.

“For these guys to be coming back to work is a huge deal for them,” Rubin said. “They are making steal for pipelines to build-up the fracking infrastructure.” Rubin is part of an emerging breed of environmental activists who see their ecological activism as part of a broader movement for social change. As he and other activists draw on the solidarity fermented over the summer, Rubin said it is import to see their ecological struggles within the pervasive framework of global capitalism, “a system based on growth and extraction for profit fundamentally dependent on human exploitation.”

“Otherwise” added Rubin, “I’m just some guy in a bubble who only cares about my little issue.”