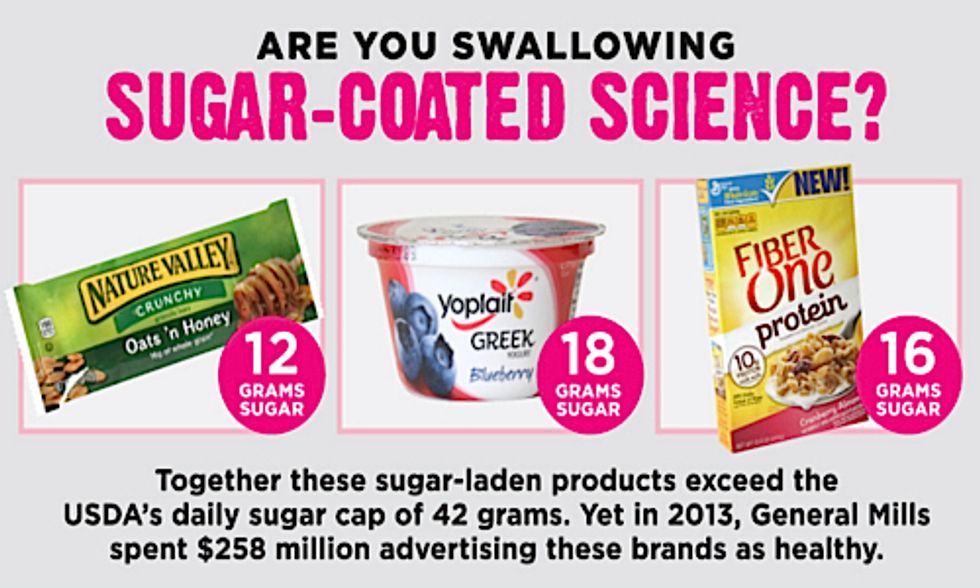 Food companies use misleading marketing and front group campaigns to obscure the health consequences of added sugar in their products, according to a new report, Sugar-Coating Science: How the Food Industry Misleads Consumers on Sugar, from the Center for Science and Democracy at the Union of Concerned Scientists (UCS).

Since 1970, average daily U.S. sugar consumption has increased from 74.7 grams to 82.1 grams—more than double the amount the USDA's dietary guidelines suggest. Graphic courtesy of UCS

Medical researchers have linked sugar overconsumption to diabetes, cardiovascular disease and hypertension. Despite these dangers, companies advertise products with added sugar using healthy-sounding language. For instance, Apple Cinnamon Cheerios are marketed as “whole grain,” which they are, but the product also contains 10 grams of sugar—10 times the amount in General Mills’ regular Cheerios.

“Companies are going out of their way to promote products with added sugar in them as healthier than they really are,” said Deborah Bailin, an analyst with the center and the report’s lead author. “In many cases, they’re adding sugar to otherwise healthy foods and misleading customers about it. It’s not just soda and snacks, either. Added sugar is in everything from bread to salad dressing and even frozen dinners.”

Since 1970, average daily U.S. sugar consumption has increased from 74.7 grams to 82.1 grams (20 teaspoons). That is more than double the U.S. Department of Agriculture’s dietary guideline recommendation of no more than 42 grams of sugar a day. The report documents that eating just a few sugar-added products during the day could easily cause someone to exceed the recommendation level. As Bailin notes in a blog post and via a supporting graphic based on the report, consuming just three General Mills products could exceed the daily sugar cap. Specifically, a Nature Valley Oats ’n Honey granola bar contains 12 grams of sugar, while it is promoted as high in whole grain. Similarly, one serving of Fiber One “Protein” Cranberry Almond cereal contains 16 grams of sugar. Finally, a serving of Yoplait strawberry Greek yogurt contains a whopping 18 grams of sugar, while the packaging emphasizes the yogurt’s protein content.

“The food industry always says people should be free to eat what they want,” said Andrew Rosenberg, the center’s director. “But people also deserve accurate, up-front information about what’s in the food they’re buying and companies simply aren’t giving it to them.”

The food industry spends nearly $7 billion annually advertising its products. About one-quarter of its spending is directed at youth advertising and sugar-heavy products make up the bulk of that spending. GoGurt yogurt, for instance, contains large amounts of added sugar, but has been advertised as healthy because it is free of “high fructose corn syrup.” The report also tracks misleading marketing campaigns for sugar-added products that have been specifically directed at women, minorities and low-income consumers.

Trade groups and front groups also play a significant role in misinforming the public, the report finds. Court documents recently revealed that the Corn Refiners Association (CRA) paid Berman and Company to run a misleading ad campaign through the Center for Consumer Freedom, a non-profit run by Berman and Company’s founder. The ads conveyed the message that all sugars—whether from corn, cane or beets—are “natural” and pose no health concerns. This message is misleading, the report says, because it distracts people from the risks associated with over-consuming sugar in any form. In internal emails, CRA’s then-president Audrae Erickson counseled colleagues to deny that CRA was financing the campaign.

Scientific and consumer awareness of sugar-added products is growing. In some cases, companies are trying to respond by highlighting key nutritional information, including sugar, on the front of their packaging. When they do so, however, they preferentially emphasize nutritional information designed to make consumers feel good about their purchase such as grain, fiber or protein content.

Beyond company actions, the report suggests several steps that could be taken to increase consumers’ access to accurate information about the food on store shelves. For one, the U.S. Food and Drug Administration is considering requiring companies to list added sugars on nutrition labels. A public comment period for the rule ends June 2. Some state health agencies, as well as the Centers for Disease Control and Prevention, have also stepped up public service advertising about added sugar. Finally, consumer and advocacy group pressure has also pushed companies to drop inaccurate claims about their products, including Coca-Cola’s health claims about Vitamin Water and General Mills’ misleading claim that Fruit Roll-Ups contain “real fruit.”

The report is being released at a forum on integrating public health science into U.S. food policy, sponsored by Union of Concerned Scientists and the University of Minnesota’s School of Public Health. The forum will convene a wide range of scientists, policy experts and medical professionals to explore scientifically informed food policies that serve the public interest.

How to Limit Added Sugar in Your Diet