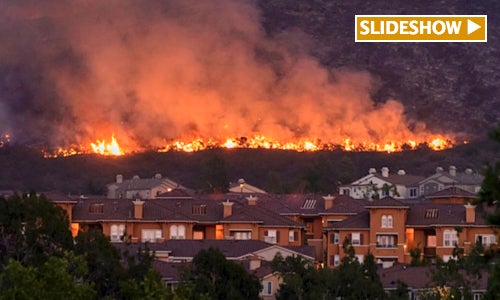 Over the last two weeks, California, Arizona and Alaska have all had to deal with severe wildfires that have surprised officials with their ferocity … and their earliness. Of the nearly one dozen blazes that ended up consuming well over 25,000 acres in heavily populated San Diego County two weeks ago, Carlsbad Fire Chief Michael Davis—a 27-year-veteran—said: “This is unbelievable. This is something we should see in October … I haven’t seen it this hot, this dry, this long in May.”

Here’s a sampling of what these three fires looked like, as captured in the lenses of local photographers:

Just as firefighters were struggling to contain the last of the Southern California burns, a second rash of fires erupted in a neighboring state: this time near Flagstaff, AZ. As of this writing, the so-called Slide fire has covered more than 25 square miles of that state’s most scenic and well-visited parkland. On or about that same day, a relatively small wildfire on Alaska’s Kenai Peninsula, south of Anchorage, began to build in intensity and started to spread; by the morning of Memorial Day it had grown to cover nearly 248 square miles—an area equivalent to the city of Chicago.

What do the three conflagrations have in common, other than their inability to wait for what we (perhaps foolishly) would like to think of as a seasonally appropriate starting date? All were helped along by catalysts such as the unseasonably high mid-spring temperatures and extraordinarily dry conditions that Davis cites, each of which scientists agree will become the new norm if we don’t act now to reverse the effects of climate change.

Gov. Jerry Brown Discusses Role of Climate Change in California’s 10 Wildfires in the Past Week