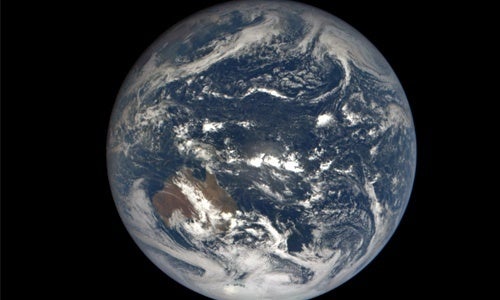 Thanks to the Deep Space Climate Observatory (DSCOVR) satellite—the nation’s first operational satellite in deep space—you can see daily pictures of the Earth. NASA launched the satellite last February and handed the reigns over to the National Oceanic and Atmospheric Administration (NOAA) a little over a week ago.

NOAA says it will use the satellite to “monitor and warn of severe and potentially dangerous space weather events.” Solar storms can produce the beautiful Northern Lights or Aurora borealis, we were treated to here in the U.S. earlier this week, but they can also cause “major disruptions to our infrastructure,” says NASA.

The DSCOVR satellite is carrying a camera—EPIC, or Earth Polychromatic Imaging Camera—which regularly snaps photos of the Earth from its position in space about a million miles away. A slideshow of the Earth’s full rotation is then posted to a website and tweeted out. You may remember hearing about EPIC, which took the “Blue Marble” photo that wowed everyone, including President Obama, in July. And the space camera also snapped a rare picture of the dark side of the moon in August.

If you’re geeking out about space and looking for more, you can watch a live stream of two astronauts doing a spacewalk to perform maintenance at the International Space Station.

The #spacewalk has begun! Watch live on NASA TV and follow @Space_Station for updates: https://t.co/rUrtFD4xk0 pic.twitter.com/KYCbnNgg8V

Astronomer Carl Sagan said we have to cherish our “pale blue dot” because it’s the “only home we’ve ever known.” President Obama said the “blue marble” photo was a “beautiful reminder that we need to protect the only planet we have.” And earlier this week astronaut Scott Kelly gave us this image to reflect upon ahead of the Paris climate talks:

#Paris as it appeared this morning from @Space_Station. #COP21 @UN #YearInSpace pic.twitter.com/SXjEoOSXrN