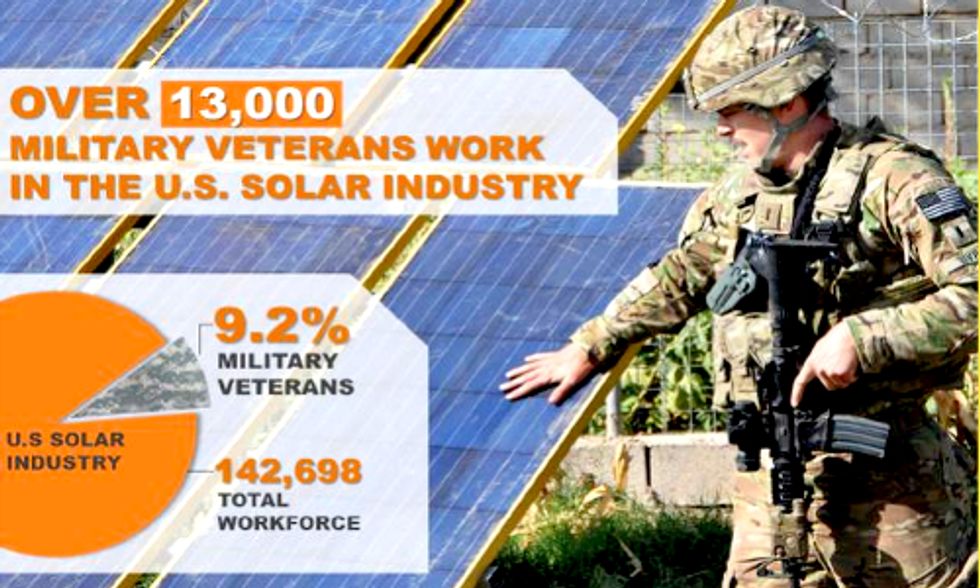 For the first time, a report has gauged the contributions of veterans in the U.S. solar industry.

According to Veterans in Solar: Securing America’s Energy Future, released today by Operation Free and The Solar Foundation, 9.3 percent of the workers in the nation's solar sector are veterans. That's good for 13,192 employees who happen to be veterans of U.S. armed forces. According to the U.S. Bureau of Labor Statistics, veterans comprise nearly 8 percent of the nation's entire workforce.

“Through this collaboration, we are finally able to see, with hard numbers, what we have suspected for years: veterans are huge assets to the clean energy economy," said Jaclyn Houser, advocacy director of Operation Free. "They bring unparalleled technical skills and a relentless focus on accomplishing the mission. And they view their work in clean energy as a continuation of their service."

In addition to statistics, the study also features examples of veterans working within the industry. Arlington, WA-based Outback Power, a 13-year-old designer and manufacturer of advanced power conversion electronics for renewable energy systems, was founded by three engineers, but soon began employing veterans from all armed forces branches at a higher average rate than both the rest of the solar industry and the U.S.

"According to company executives, veterans bring invaluable skills acquired during their service to their work in the solar industry," the report reads. "Those assets include a strong technical background, an ethic of teamwork, and leadership skills that contribute to the greater success of the company."

The report also includes a first-person sidebar from Kyle Hock, a U.S. Army civil affairs sergeant in Operation Iraqi Freedom, who has returned with hopes of entering the solar industry.

"During my time in the service, I gained a deep appreciation for solar power. In Iraq, I saw ﬁrst hand how access to energy can either strengthen or cripple the security environment," Hock wrote. "There is a need for solar energy—both at home and abroad—to reduce our dependence on insecure energy sources and to make a positive change in people’s lives."

The study covers everything from pay scales to the industry's outlook on hiring. Nearly 62 percent of these companies—compared to 44 percent nationally—expect to add solar workers over the next year, while only 2 percent expect to scale back on employment.

“Our servicemen and women have made great sacrifices for our country and it is our responsibility to ensure that when they return home there are high-skill and well-paying jobs available," said California State Rep. Scott Peters, D-52, said. "The solar industry offers our veterans a unique opportunity to use the knowledge they learned serving our country in a rapidly growing sector that is vital to both our national security and economic future.”

Overall, the amount of solar energy deployed in the U.S. has grown by about 500 percent since 2008, according to the study.

"This report highlights the ways solar strengthens the US economy and our national security," said Clean Power Finance CEO Nat Kreamer, who has served as an intelligence officer for the U.S. Navy's Special Forces.

"Veterans are over represented in the solar industry because we know first-hand that clean, affordable domestic power makes America and the world safer."