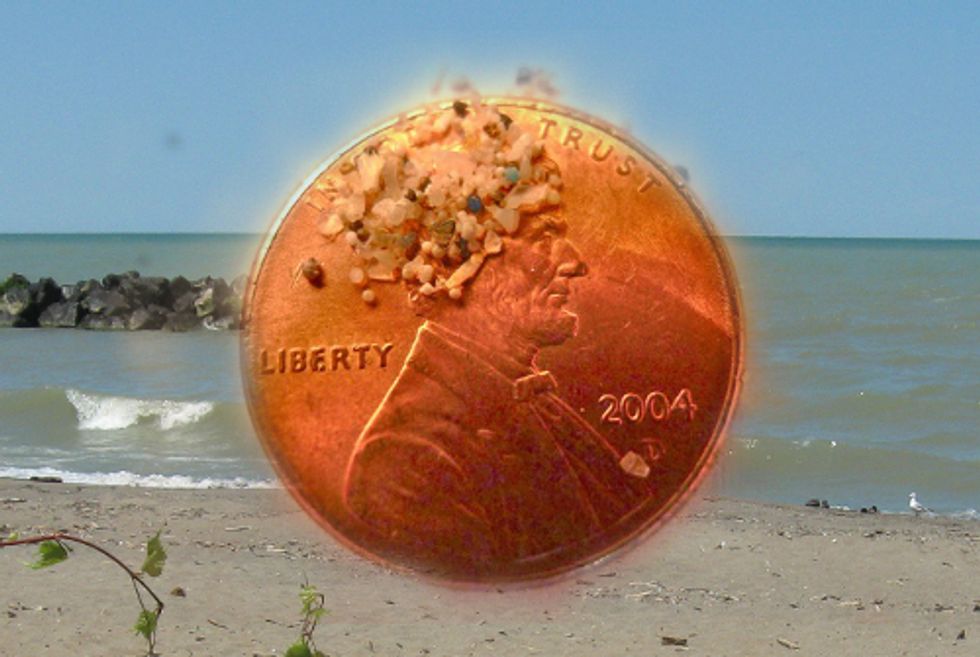 Ever think about what happens to those plastic microbeads in exfoliating products that you rub on your face and body?

A new paper gives circumstantial evidence that these micro-particle polyethylene beads, which are less than 1mm in diameter and designed to be washed down the drain, are polluting the Great Lakes.

The paper was published recently in the peer-reviewed Marine Pollution Bulletin. Written by 5 Gyres Institute, in collaboration with researchers from State University of New York (SUNY) at Fredonia, the report is believed to be the first micro-plastic pollution survey of the Great Lakes Region.

The highest concentrations of micro-plastics were observed in Lake Erie, and accounted for about 90 percent of the total plastics found. Polyethylene and polypropylene beads were found in the samples, as well as particles of aluminum silicate, or coal ash, a byproduct of coal-fired power plants.

Armed with its preliminary findings last year, 5 Gyres Institute asked manufacturers of personal care products to pledge to remove the plastic microbeads from their products. Many of the companies, including L’Oreal, The Body Shop, Colgate-Palmolive, Unilever, Johnson & Johnson and Procter & Gamble have agreed to phase out them out.

Leading this trend to phase out microbeads was U.K.-based Unilever. Under pressure from European environmental activists, Unilever in December 2012 announced it was working to eliminate plastic microbeads in the next three years.

Study after study has documented the presence of large amounts of plastic in the world’s oceans, Sam Mason, associate professor of chemistry at SUNY Fredonia, said. “If we find it in the oceans, we’re probably going to find it in the Great Lakes.”

The study showed that the microbeads were not being captured by sewage treatment plants. Small fish and zooplankton could be feeding on microplastics because the particles are about the same size as their food. If these animals are ingesting the particles, the plastic could interfere with nutrient uptake or even physically clog their guts, Mason said.

Researchers are worried that persistent toxic substances found in the Great Lakes, such as polychlorinated biphenyls, can adsorb into the plastic and be released in the bodies of aquatic creatures that eat the tiny particles. The plastic then could serve as a carrier for toxic substances to move into fish, then into those who eat them, including humans and birds, Mason said.

The researchers' work was funded by the Burning River Foundation, an Ohio nonprofit organization that focuses on protecting aquatic resources. In 2012, the researchers cruised Lakes Superior, Huron and Erie to collect samples from the surface waters. In August, they set sail on an unprecedented expedition to quantify and report on the extent of plastic pollution in Lake Michigan. Every piece of microplastic collected—there were thousands—was examined using a scanning electron microscope and energy-dispersive X-ray spectroscopy, Mason said.

Most of the beads are spherical, suggesting they were released into the environment as pellets, Mason said. Many of them are the same size and color—including white, blue, green, or orange-red—as the small beads used in a number of personal care products.

Several states and municipalities are interested in banning micro-plastics in consumer products. 5 Gyres is working with a team of advisors to produce model legislation for states to consider.

5 Gyres Institute has launched a microsite  as well as an international mobile app, Beat The Microbead, which allows consumers to scan the barcode of personal care products to determine whether they contain plastic microbeads and whether the manufacturer has agreed to remove them.