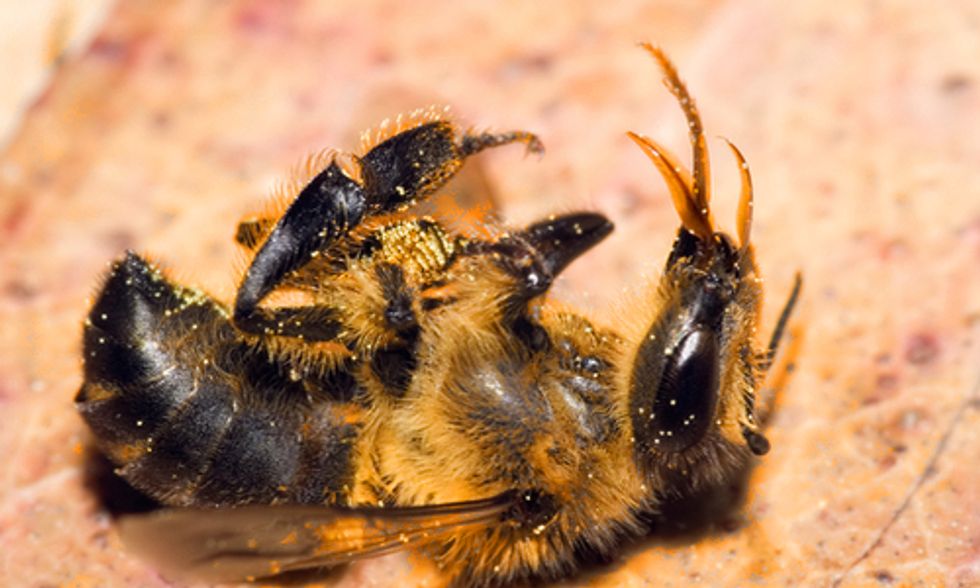 Center for Food Safety released a scientific literature review which reveals that neonicotinoid insecticide seed treatments offer little benefit, do not increase crop yields and cause widespread environmental and economic damage. In particular, neonicotinoids have been implicated in bee population declines and colony collapse. While some fear that crop yields will suffer without the use of neonicotinoids, the study demonstrates that their benefits do not outweigh the costs.

According to the USDA, 10 million bee hives have been lost since 2006, representing a $2 billion cost to beekeepers.
Photo courtesy of Shutterstock

The authors examined 19 peer-reviewed studies of the relationship between neonicotinoid treatments and actual yields of major U.S. crops. Eight studies found that neonicotinoid treatments did not provide any significant yield benefit, while 11 studies showed inconsistent benefits. The studies corroborate evidence from European countries that were able to maintain crop yields even after neonicotinoid bans. The review cites the U.S. Environmental Protection Agency (EPA) for failure to conduct a thorough cost-benefit analysis and calls on the EPA to suspend seed treatment product registrations.

“The environmental and economic costs of pesticide seed treatments are well-known. What we learned in our thorough analysis of the peer-reviewed science is that their claimed crop yield benefit is largely illusory, making their costs all the more tragic,” said Peter Jenkins, co-author of the report and consulting attorney for Center for Food Safety.

Neonicotinoids are a class of pesticides known to have acute and chronic effects on honey bees and other pollinator species and are considered a major factor in colony collapse. Neonicotinoid pesticides are also slow to break down, so they can build up in areas where they are applied. They contaminate surface water, ground water and soil, endangering not only pollinators, but also other beneficial species that inhabit these ecosystems.

Pesticide seed treatments are regulated by the EPA under the Federal Insecticide Fungicide and Rodenticide Act (FIFRA), which directs the agency to evaluate whether the use of any pesticide proposed for registration presents “any unreasonable risk to man or the environment, taking into account the economic, social, and environmental costs and benefits.”

“Their impact on honey bees, other pollinators and on the nation’s beekeepers is especially troubling. Because the available scientific studies show little if any benefit, EPA should suspend all neonicotinoid seed treatment product registrations as required under FIFRA until the costs and benefits are adequately reviewed,” said Jenkins.

“Although there is no doubt that neonicotinoids are highly toxic to insects, this does not mean they are routinely effective in pest management. In many contexts they provide no benefit, and in others they are not a cost-effective option. The bottom line is these toxic insecticides are being unnecessarily applied to seeds in most cases, while harming pollinators and the environment,” said Sarah Stevens, researcher and co-author of the report.

According to the U.S. Department of Agriculture (USDA), 10 million bee hives have been lost since 2006, representing a $2 billion cost to beekeepers. Honey bees are responsible for much of the pollination required for agricultural production. USDA estimates pollinator services to be worth $20-30 billion annually. Further, honey and bee products have also suffered with 2013 the lowest U.S. honey production ever recorded. That was a $38 million drop since 2012. The most significantly decline in honeybee production has occurred in the Corn Belt where neonicotinoid use is highest.

“The economic costs of neonicotinoid seed treatments are real,” added Stevens. “In addition to paying for unnecessary treatments, the overuse of these pesticides has led to significant costs to society at large.”