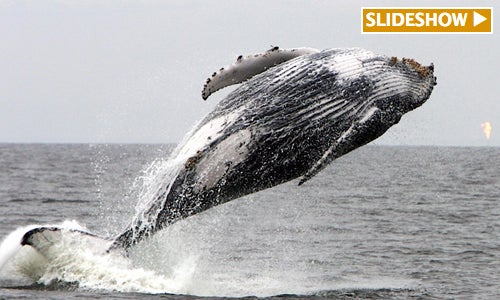 When you are 50 feet long and weigh more than 40 tons—the maximum allowed weight on most U.S. highways—you need a lot of space to move around.

Humpback whales, still recovering from whaling that wiped out as much as 90 percent of their global population, are confronted with new challenges caused by hydrocarbon extraction, shipping routes and ocean-based pollutants, according to a study co-authored by Sara Maxwell, a biology postdoctoral scholar affiliated with the Stanford Woods Institute for the Environment.

The study, published last week in the journal Conservation Biology, finds that humpback whales migrating from breeding grounds off the coast of Africa must navigate past offshore oil and gas rigs, vessels in shipping lanes and encounter the potentially harmful toxicants that accompany them.

“Knowing not just where animals are going, but what kind of human activities and potential threats they are facing gives us insight into how we can effectively help them while still maintaining the services that we as humans rely on in the ocean,” said Maxwell, who works at Stanford’s Hopkins Marine Station.

The whales spent the most time in the national waters of Cameroon, Gabon, Nigeria and Angola, areas overlapped with offshore hydrocarbon operations and major shipping lanes. Overall, the whales spent an estimated 41.4 percent of the study period near oil and gas platforms. They spent nearly 76 percent of their time within 200 miles of the coast, a zone in which individual countries have rights granted by international law over the exploration and use of marine resources, including energy production.

Data on certain impacts on whales in this region is limited, but there is extensive evidence of ships striking whales off the California coast, where numerous programs have been put in place to mitigate the problem, Maxwell said.

“There are indications that oil production in these coastal regions has and will increase in the coming years,” said study lead author Howard Rosenbaum, director of the Wildlife Conservation Society’s Ocean Giants program. “So gaining a better understanding of the movements of whales and quantifying the degree of overlap with anthropogenic activities will help assess the potential risks to this population, and identify mitigation strategies that should be considered to better protect whales.”

The satellite data contained some surprising results: while several whales predictably remained in the offshore waters of Gabon or traveled south, nearly half of the tagged group (including two females with calves) moved north into a previously unknown part of the breeding range for humpbacks off the coast of Gabon.

While migration patterns of humpbacks have been the subject of extensive study in other ocean basins and regions, the direct movements of humpbacks along the western African coast in the eastern South Atlantic have only recently come to light.

The study’s discovery prompted Maxwell to say, “We are still in an age of discovery when it comes to these ocean giants.”