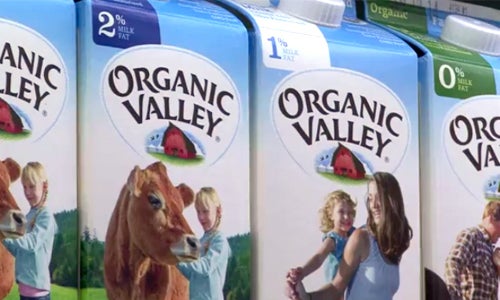 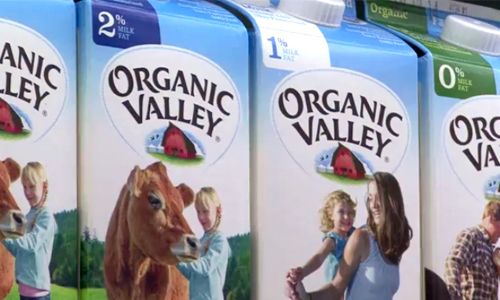 While all types of milk fat can help improve an individual’s fatty acid profile, the team concludes that organic whole milk does so even better.

Conventional milk had an average omega-6 to omega-3 fatty acid ratio of 5.8, more than twice that of organic milk’s ratio of 2.3. The researchers say the far healthier ratio of fatty acids in organic milk is brought about by a greater reliance on pasture and forage-based feeds on organic dairy farms.

A large body of research has shown that grass and legume forages promote cow health and improve the fatty acid profile in organic dairy products. Still, said WSU researcher Dr. Charles Benbrook, the study’s lead author, “We were surprised by the magnitude of the nutritional quality differences we documented in this study.”

After fruits and vegetables, dairy products are the largest category of the growing, $29 billion organic food sector, according to the Organic Trade Association’s 2013 Organic Industry Survey.

Organic milk and cream sales were worth $2.622 billion, the survey found. Overall, organic milk accounted for 4 percent of fluid milk sales last year, according to the Milk Processor Education Program.

The consumption of more omega-6 fatty acids than omega-3 fatty acids is a well-known risk factor for a variety of health problems, including cardiovascular disease, cancer, excessive inflammation and autoimmune diseases. The higher the ratio of omega-6 to omega-3, the greater the associated health risk.

Western diets typically have a ratio of about 10-to-1 to 15-to-1, while a ratio of 2.3-to-1 is thought to maximize heart health. The team modeled a hypothetical diet for adult women with a baseline omega-6 to omega-3 ratio of 11.3 and looked at how far three interventions could go in reducing the ratio to 2.3.

They found that almost 40 percent of the needed nine-point drop could be achieved by switching from three daily servings of conventional dairy products to 4.5 daily servings of mostly full-fat organic dairy products. Women who also avoid a few foods each day that are high in omega-6 fatty acids can lower their fatty acid ratio to around 4, 80 percent of the way to the 2.3.

“Surprisingly simple food choices can lead to much better levels of the healthier fats we see in organic milk,” Benbrook said.

The team also compared the fatty acids in dairy products to those in fish.

“We were surprised to find that recommended intakes of full-fat milk products supply far more of the major omega-3 fatty acid, ALA, than recommended servings of fish,” said co-author and WSU research associate Donald R. Davis.

Conventional milk had about nine times more ALA than fish while organic milk had 14 times more, he said. Organic milk also is a significant source of two other omega-3 fatty acids, EPA and DPA, but not DHA.

The study was published Monday in the online journal PLOS ONE. It analyzed organic milk from cows managed by farmer-owners of the Cooperative Regions of Organic Producer Pools, or CROPP, which markets through the Organic Valley brand. The two organizations helped fund the study but had no role in its design or analysis, which was funded by the Measure to Manage program in the Center for Sustaining Agriculture and Natural Resources at Washington State University.

Check out this video that features an interview with Dr. Charles Benbrook, the study’s lead author.