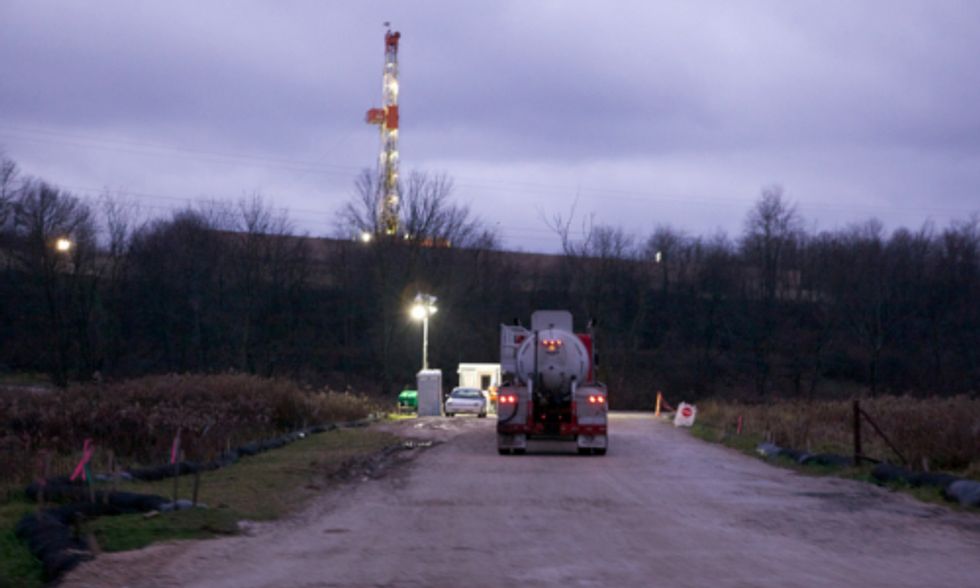 Even before the most recent recession, Carroll County in rural eastern Ohio was struggling. Employment prospects were sparse and young people were fleeing for opportunities elsewhere. Then came 2011 and arrival of the shale industry, giving the local economy an injection of jobs and the attendant financial benefits an influx of new business creates.

Though shale development has changed the county’s fortunes, the transformation from ghost town to boom town has been far from smooth, according to a study released in April by nonprofit research organization Policy Matters Ohio. Months after the study was made public, there are still lingering questions about whether the cultural, environmental and public health costs of fracking outweigh the economic benefits.

“This was a region struggling for a long time, so fracking has been a shot in the arm,” said Amanda Woodrum, report author and Policy Matters researcher. “But the story does not end there.”

The Carroll County study was part of a larger effort to determine the impact of shale development in four communities in Ohio, West Virginia and Pennsylvania. Policy Matters joined with other members of the Multi-State Shale Research Collaborative for the year-long venture.

Carroll County, which has half the state’s active fracking wells, is a decade newer to the shale energy game than its out-of-state contemporaries, said Woodrum. Still, about 95 percent of county sub-surface rights have already been bought or leased for potential use in domestic oil and gas production.

The signing bonuses that came with these land sales or leases—as high as $5,800 per acre—are being spent locally on farm property and equipment, the study says. Oil and gas companies are also purchasing supplies from businesses in Carrollton, the economic heart of the county, while company employees patronize local restaurants and bars. This activity has led to a 31 percent increase in sales tax receipts.

The inflow of cash came at a critical time for the region’s agriculture-based economy, said Carroll County commissioner Robert Wirkner.

“We had a number of farmers one step away from insolvency,” he said. “When the oil people came, the signing bonuses helped get them back on their feet.”

Increased sales tax revenues resulted in much-needed facility repairs, including a courthouse clock tower built in 1885. “We had been discussing removing the clock tower,” Wirkner said. “There was no money available to fix it.”

What About the Jobs?

General job trends in the county have been another positive indicator of economic activity, at least at first glance, Policy Matters researchers said. Unemployment is down to 8.3 percent from a recession-era high of 14 percent. However, in parsing these figures, Woodrum and her team discovered that shale gas drilling has not yet lived up to the jobs promised.

Fracking-related employment in Ohio has grown by about 3,000 jobs, less than one-tenth of one percent of the state’s total employment, said Woodrum. This number is far from Ohio Oil and Gas Associations claims that 40,000 new positions would be created by the industry.

In Carroll County, higher paying jobs related to oil and gas drilling, like construction of pipelines and processing plants, have been mostly going to out-of-state workers following their company’s drilling rig as it moves throughout the country. “Oil jobs are almost a new form of migrant labor,” said Woodrum.

The local population has picked up less lucrative jobs made available through the economic activity that fracking created. Truck driving, delivery, waitressing and cleaning positions are among the existing services that received an uptick. While a shale oil processing plant being built in a neighboring county may result in permanent local jobs,the overall demand for this type of work has still been lower than expected.

The influx of workers has meant an increased need for temporary housing. Few workers are buying property, but a hotel in Carrollton has been solidly booked for two years, while the local campgrounds are overflowing with RVs. Rental property prices have doubled, tripled and even quadrupled, squeezing out some lower-income residents who couldn’t afford to pay higher rent.

A larger concern for citizens interviewed by Policy Matters researchers was fracking’s impact on roads and traffic. Trucks filled with materials have clogged streets already unfit for heavy loads and additional traffic. Drilling companies signed maintenance agreements to share the cost of repairing damaged roads, but the upwards of 13,000 vehicles that pass through a major Carrollton intersection on busy days have been a shock to the system for the town of 3,200.

“It used to be you could shoot a cannon down Main Street at noon and not hit anything,” said county commissioner Wirkner. “The traffic now really jumps out at you.”

Residents expressed concern about chemical-laced fluids dredged up by the fracking process contaminating local drinking water. Other environmental anxieties included air and noise pollution from the flaring of gas wells and from the drilling itself. Interviewees also mentioned the risk of slurry spills related to pipeline construction and the connection between hydraulic fracturing and earthquakes.

“We heard so much (statewide) and in the media that came from a very pro-fracking point of view,” said Woodrum. “People at the local level were much more pragmatic about drilling’s benefits and costs.”

Ultimately, the report concluded that the economic benefits of fracking fall far short of what was promised and come with costs to safety, the environment and the community.

Since the processing plants and drilling rigs aren’t leaving Carroll County anytime soon, the only viable option is to maximize the benefits and minimize the costs, said Woodrum.

For starters, the report recommends a five percent severance tax to be used for industry oversight and regulation. The tax would also cover the community impacts of drilling, from cleanup of streams flowing through drilling areas to storing wastewater.

The study further suggests an additional 2.5 percent tax to be set aside in Ohio’s Advanced Energy Fund, which promotes diversification of Ohio’s energy portfolio and use of that energy locally. Better monitoring of water quality, new pollution control requirements and policies requiring local hiring for fracking-related jobs are among the other changes outlined in the report.

Enacting those recommendations won’t be easy, especially in a state where the pro- and anti-fracking camps rarely engage in fruitful conversation, said Woodrum. Even with these roadblocks, she believes it’s critical for state leaders to find clarity when it comes to the “complicated story” of Ohio’s shale gas future.

“There’s been both good and bad to shale development locally,” Woodrum said. “We need to work together to come up with some creative solutions to the problems.”