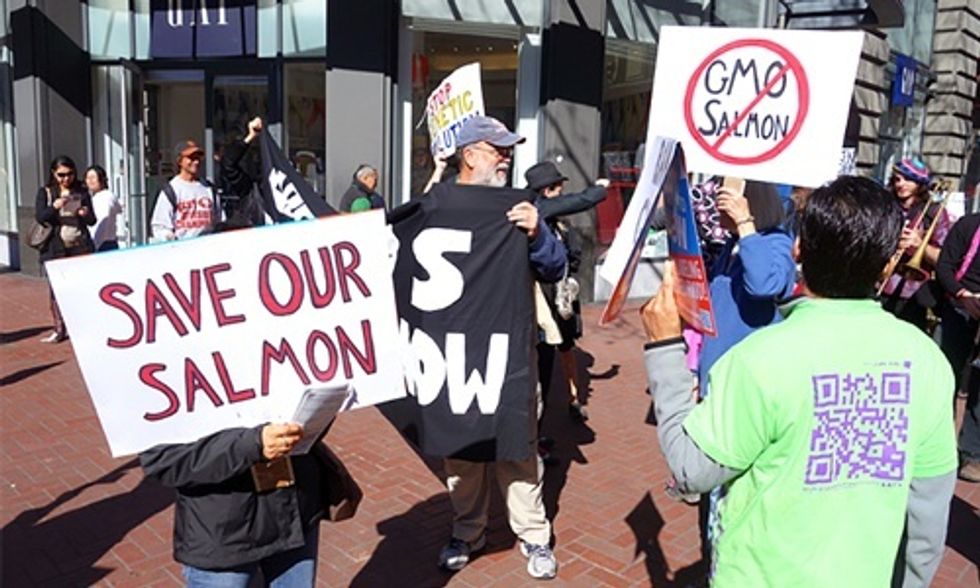 For those of you who have read the Mary Shelley novel “Frankenstein,” you remember that the name refers to the scientist Victor Frankenstein, not the monster he constructed from body parts found in the local cemetery. The story has captured the public’s imagination for nearly 200 years, and “franken” has become a common prefix—and a pejorative—for genetically modified organisms (GMOs), which are made with cut-and-pasted genetic material from different species of plants, animals and microorganisms.

GMO salmon is an Atlantic salmon whose DNA has been re-engineered with a “growth-hormone gene construct” made from genetic material of other fish. Photo credit: Steve Rhodes / Flickr

GMO salmon—or franken-fish, as it is sometimes called—is an Atlantic salmon whose DNA has been re-engineered with a “growth-hormone gene construct” made from genetic material of other fish. One of these fish, the ocean pout, is only as closely related to Atlantic salmon, taxonomically speaking, as a human is related to a porcupine or a platypus. This recombination of genetic material would never happen in nature.

Beyond being designed and engineered by humans and created in a laboratory, GMO salmon and Frankenstein’s monster may also share another defining feature—larger-than-normal proportions. AquaBounty Technologies, the company behind GMO salmon, has always insisted that its fish grow much faster than normal Atlantic salmon—but not larger. This is one of the most frequent claims the company makes—to journalists and even to financial regulators at the Securities Exchange Commission.

But, according to a recently released scientific review from the Canadian government, AquaBounty doesn’t have a shred of evidence supporting this claim. This is more than a little odd because AquaBounty calls GMO salmon the “most studied fish in the world.”

If it turns out that GMO salmon do grow larger than normal salmon, it would almost certainly provoke even further consumer opposition to the fish while also compromising the company’s pending risk assessment with the FDA. As Canadian government scientists note, a larger-than-normal Atlantic salmon would be able to eat larger-than-normal prey fish, and this expanded diet could expand the environmental impact of escaped GMO salmon.

Again, we don’t know if GMO salmon do grow larger than normal salmon, but given AquaBounty’s track record of questionable claims, it needs to be checked out. The company’s claims about GMO salmon’s fast growth-rate have turned out to be bogus, as the preponderance of evidence indicates GMO salmon probably grow slower than conventional farmed salmon. Likewise, the company has long trumpeted its safe, biosecure production of GMO salmon, but independent sleuthing has revealed “lost” salmon, a major accidental disease outbreak and a $9,500 fine for failing to comply with environmental regulations.

If approved by the FDA, AquaBounty’s salmon will be the first GMO animal to enter the food supply anywhere in the world, so it’s scary to realize how little the world knows about the basic biology of this fish—a situation that is unlikely to be addressed if the FDA continues to ignore its role as a science-based regulator.

While there are sizable gaps in what we know about this fish, there is still plenty of evidence showing that AquaBounty’s salmon is totally unnecessary for our food system, presenting substantial risks to the environment and consumers but no benefits.

EcoWatch initially posted this blog with numerous editorial changes not authorized by the author. We deeply regret the error and have restored the blog to its initial content.

28 Most Inspiring Urban Agriculture Projects Around the World