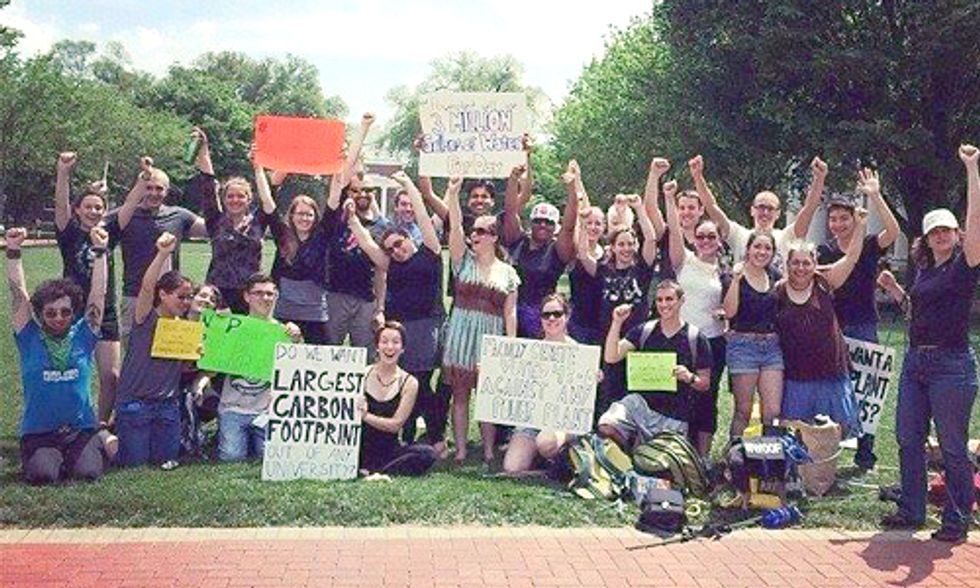 Emily Behnke is a sophomore and environmental engineering major at the University of Delaware who spends her days exploring her all-consuming passion for the environment. She is also founder and president of her school’s Project Green: U Del Chapter.

At first, my freshman year of college was a breeze. Gen Ed classes? Easy. Homework? Doable. A brand-new living space with unfamiliar people? You get used to it. But once I decided to contribute to a full-scale environmental campaign against the university over its decision to build a natural gas power plant on campus, my year got a lot more complicated.

I was ready to do the same things everyone does freshman year. I went to tons of club meetings, tried new things and met new people. But then came the power plant. Second semester wasn’t even in full swing when I learned that the University of Delaware had, under the binds of a 75-year lease, offered a plot of land to an independent company, The Data Centers LLC, for the construction of a data center and the natural gas power plant needed to power it. It was a billion dollar deal. That certainly sounded like a lot of money to me.

One group of students responded with concern. They discovered that the university had already signed the lease and the City of Newark became a “public sponsor” of the project without making the dealings public. As we started to learn more and more of the project details, the list of reasons to oppose them only grew. At 279-megawatt, this power plant would have had the capacity to power five cities the size of ours. That the power plant would be used solely to power a data center seemed like a stretch. The truth, we eventually learned, was that the excess energy would be sold back to the grid, thereby making this, in our minds, more of a profit-making scheme than a power-producing initiative.

We also learned that nearly every other data center in the country is powered through the grid from the start, not by an isolated source. This project seemed like a gamble that had never been successfully executed. Even worse was the notion that a university—supposedly the most progressive and advanced-thinking of all public entities—made the conscious decision to put one of the most obvious and proven symbols of health and environmental danger right on its campus. To us, it was an obvious statement in favor of fossil fuels and against our right to health as students on this campus.

Couple those unnerving logistical technicalities with all the glaring environmental and community impacts—direct pollutant exposure from ten immense smokestacks, three million gallons of water consumption a day, potentially unsafe gas pipelines through Delaware, all within feet of neighborhoods and schools—and us students felt we had no choice but to step up to try to stop it.

A group of the town’s residents, Newark Residents against the Power Plant, had already started an immense campaign against this project, so a small group of students decided to follow their example and offered their own informal, weekly meetings in the sitting room of an old church. I happened upon one of those meetings a few weeks into the semester and was hooked immediately. But would the passion of a few students be enough to defeat the “machine” behind the power plant?

By the time I found my way to that meeting, I had already blossomed from an occasional earth sympathizer to a full-blown eco enthusiast thanks to Project Green Challenge, which I had competed in October 2013, that same year. A lifetime’s worth of environmental knowledge blended into a one-month competition, Project Green Challenge (PGC) was the single most monumental and groundbreaking experience of my life thus far. In just one month, I became massively eco-informed. But PGC also awakened in me a desire to change the world. Every goal I had for myself now needed to be aligned with environmentalism because without question that would be the only subject I would—and could—imagine pursuing from then on.

Project Green Challenge is why I was so eager to join that little team of students: I was hungry for change, and I was dying to channel that motivation into this campaign against the power plant.

We mounted the fight of our lives, and with the help of the resident group and support from Teens Turning Green, the non-profit that hosts Project Green Challenge, we organized ourselves as the Blue Hens for Clean Air. After months of organizing protests, social media campaigns, and campus-wide outreach events, adding to the huge efforts of the Newark Residents Against the Power Plant, we won! In July, the University of Delaware decided to terminate the lease with The Data Centers LLC, thereby eliminating any chance of the construction of a natural gas power plant on our campus.

Difficult and demanding as the journey was, I realize now that it was never impossible. Now, we know for a fact that a small group of people can win against an enormous university. It will happen again, and when it does, I’ll be there.

Project Green Challenge 2014 kicks off on Oct. 1. Sign up to change your life, campus and community today.