Students to Colleges: Take Our Money Out of Dirty Energy 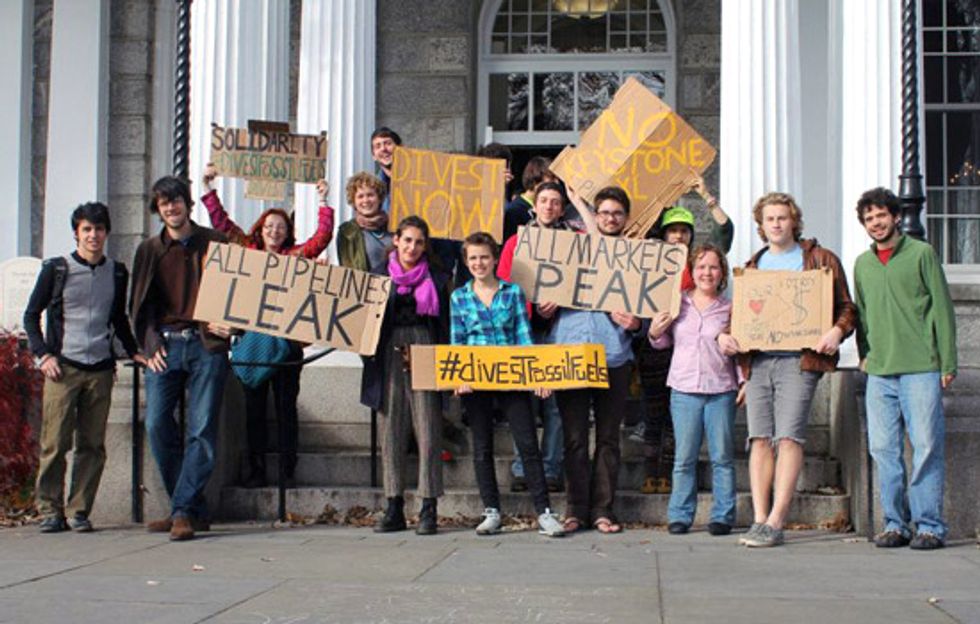 Over the last six months, students in the U.S. have launched a new strategy to change the national conversation on climate change and shift political power away from the fossil fuel industry. Students are demanding that their colleges and universities take their money out of dirty energy and invest in a way that protects our future.

Fossil fuel divestment campaigns have taken off on more than 200 college campuses, and two of them—Unity College in Maine and Hampshire College in Massachusetts—have already committed to remove fossil fuel stock from their portfolios. And it’s not just students who are taking action—whole cities such as Seattle are pledging to divest as well.

As a strategy, divestment is a form of economic non-cooperation. By untangling our institutions’ money from the fossil fuel industry, we declare that we will not be complicit with the industry’s dangerous and destructive practices. Furthermore, divestment and socially responsible reinvestment create a sizeable demand for financial portfolios that are free from fossil-fuel stocks, and fundamentally change the way our institutions and governments do business. Students, churches and city governments are taking decisive action and hoping that governmental leadership will do the same.

Divestment is not a new idea in politics. Students who developed the current strategy of divestment cribbed the concept from the movement in the 1980s against the racist apartheid regime in South Africa.

Then as now, businesspeople and politicians who had been insulated from hearing dissent suddenly listened when the people began to move their money. Grassroots campaigners utilized divestment as a way to take away the social license of corporations doing business in apartheid South Africa and thereby changed the political discourse around the issue. We saw this begin to happen in our current campaign when Senator Sheldon Whitehouse (D-RI) praised students working on fossil fuel divestment in a speech on the Senate floor.

“These students are imploring their schools to weigh the real cost of climate change against the drive for more financial returns,” Whitehouse said. “With American college and university endowments estimated to total more than $400 billion, this movement by students deserves significant attention.”

Not everyone has been so enthusiastic about the idea. Scholar and journalist Christian Parenti, who wrote one of the more widely read critiques of divestment for the Huffington Post, has said that real change cannot happen without significant federal leadership. Parenti points out that our federal government is the world’s greatest consumer of energy and vehicles, and the nation’s largest emitter of greenhouse gases. He believes that if the government begins purchasing renewable energy for its buildings and cars, the market will drastically shift towards clean energy and investments will follow.

Of course, fossil fuel divestment and Parenti’s “Big Green Buy” are not mutually exclusive. But there is no time to wait for government policies to change. Furthermore, as centuries of social movement history reveals, state power doesn’t shift until you push on it. A large-scale divestment campaign is one critical part of that push.

Rather than waiting for elected leaders to take action, students are swiftly transforming their own universities and communities by standing up to the dirty energy regime. The group that I work with at Swarthmore College, Swarthmore Mountain Justice, has been waging a fossil fuel divestment campaign for the last two years. Our campaign began with a trip down to West Virginia to see firsthand the impacts of mountaintop removal coal mining, and to meet the communities who are organizing against the dangerous practice.

Beyond Appalachia, there are numerous communities who face the destructive environmental and health impacts of extractive industries daily—from strip mining on the Black Mesa plateau to coal exports in the Pacific Northwest, from tar sands mining in Alberta to fracking in Western Pennsylvania. In solidarity with these communities and with all of those who are directly affected by climate change, we have called on our Board of Managers to stop investing in 16 major coal, oil and gas companies.

We have run into great resistance from Swarthmore board members who say that addressing climate change is important, but refuse to alter their portfolios at the risk of diminished returns. Treasurer Sue Welsh, for example, told The New York Times, "The college’s policy is that the endowment is not to be invested for social purposes." The college does not screen any of its investments for political or social impact, and is invested in companies such as ExxonMobil.

By investing in these companies, our board members are betting on the financial success of mountaintop removal, drilling for oil in the Gulf, and other deadly practices, without acknowledging the human cost.

We have spent the last two years building student, alumni, and faculty support for fossil fuel divestment. Swarthmore College has a long history of leadership in social justice, and many of these values are integrated into the culture of the school. Through our work, it has become understood within the larger Swarthmore community that we cannot protect students’ futures and be a leader in sustainability while still investing heavily in the fossil fuel industry. Bold action is necessary, and the transformation of our own institution’s endowment is the first step.

In addition to divestment’s power as a tactic, it’s also helping students draw connections between their institutions’ policies and the larger movement for environmental and climate justice. Kirsten "Sally" Bunner, a member of Earlham College’s divestment group, says that divestment campaigns are an opportunity to connect relatively privileged college students with people “whose lives are affected on a consistent and daily basis by the practices of the fossil fuel industry.”

Communities across the world, from Appalachia to Nigeria, have been organizing against extractive practices for decades. Within the last few months, we have seen a surge of resistance from Idle No More, New Yorkers Against Fracking and the Tar Sands Blockade. These groups aren’t pushing divestment—their tactics range from lockdowns on pipeline construction sites to occupations of elected leaders’ offices. But as they organize resistance on the ground, our divestment campaigns can help to erode the reputations of the companies they’re fighting.

“By connecting with these communities and finding out ways that we can support one another,” Bunner said, “We can make a greater impact than if we simply divest from fossil fuels alone.”

In order to facilitate these connections, students and activists from across the country will gather at Swarthmore College in February for the Power Up! Divest Fossil Fuels Student Convergence.

“One purpose of the convergence will be to examine divestment in the context of the larger climate justice movement,” said Bunner, who is one of the event’s organizers. Student-led, the convergence will bring frontline activists, students, movement allies and climate organizers together to develop a cohesive vision and strategy for the next year.

The community at Swarthmore has given me an invaluable education and strengthened the conviction of my beliefs. But I believe my institution must do better. As a member of the younger generation, I recognize the profound weight of our planetary inheritance.

When I receive my degree in June, I will not be thinking about graduate programs or long-term employment opportunities. I will be thinking about the fact that carbon emissions must begin to decline by 2015, if we hope to prevent a change in global temperatures of more than 2 degrees, the tipping point beyond which catastrophic climate change begins.

Just two years from now, we risk passing that tipping point. The time to work together for climate justice is now. We cannot wait.

Sachie Hopkins-Hayakawa wrote this article for YES! Magazine, a national, nonprofit media organization that fuses powerful ideas with practical actions. Sachie is a senior at Swarthmore College and is from Portland, Ore. She has been working for fossil fuel divestment with Swarthmore Mountain Justice for the past two years and was an intern for YES! Magazine in the summer of 2012.

This article was originally published by YES! Magazine.