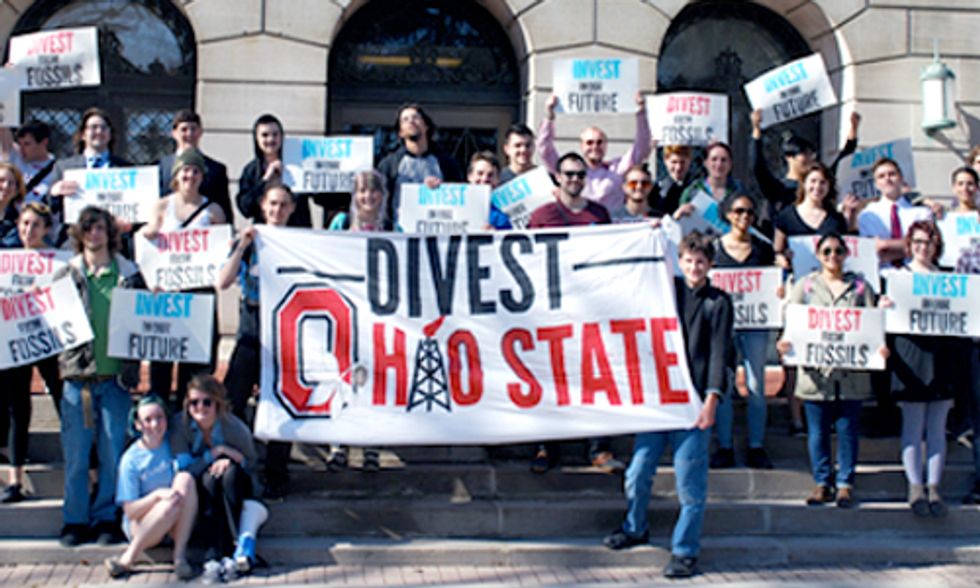 Students for Environmental Action, an Ohio State University (OSU) student organization, rallied last week to encourage the university to divest from harmful fossil fuels. The campaign is part of a nationwide divestment movement that has spread to more than 300 colleges and universities across the country.

“As one of the top universities in the country, OSU is in a unique position to be a beacon of change within the higher education community, and a national leader in the movement towards a sustainable future.” Photo credit: Students for Environmental Action / Rachael Collyer

The event started at the Gateway Plaza with students delivering their message to the university’s investment office. Then the rally proceeded across campus to the board of trustees’ office in Bricker Hall. Both locations featured speakers calling for fossil fuel divestment.

“The purpose of this action is to show the university that as students, we are committed to a future no longer linked to destruction of our planet and communities,” said Rachael Collyer, a third year English and Spanish honors major at OSU.

“As one of the top universities in the country, OSU is in a unique position to be a beacon of change within the higher education community, and a national leader in the movement towards a sustainable future.”

The OSU’s endowment fund currently holds more than $3 billion, contributed primarily by students and alumni. Despite continued efforts to obtain the information regarding the university’s specific investments in the fossil fuel industry, Students for Environmental Action has been denied access to the relevant documents, having been told by the administration that the information is a “trade secret.” If five percent of the portfolio was invested in fossil fuel companies, that would amount to around $150 million.

Students delivered a formal request to the university to divulge their holding and withdraw any investments from the fossil fuel industry.

“I love Ohio State and I want it to be the best university it can be,” said Milana Novgorodsky, a third year business student at OSU.

This request is part of a larger movement of students across the country that seek to hold their institutions accountable for their financial investments in an industry that profits from continued dependence on dirty fuels that are directly responsible for climate change. OSU has a responsibility to its students to invest in their futures, which means divesting from the fossil fuel industry.