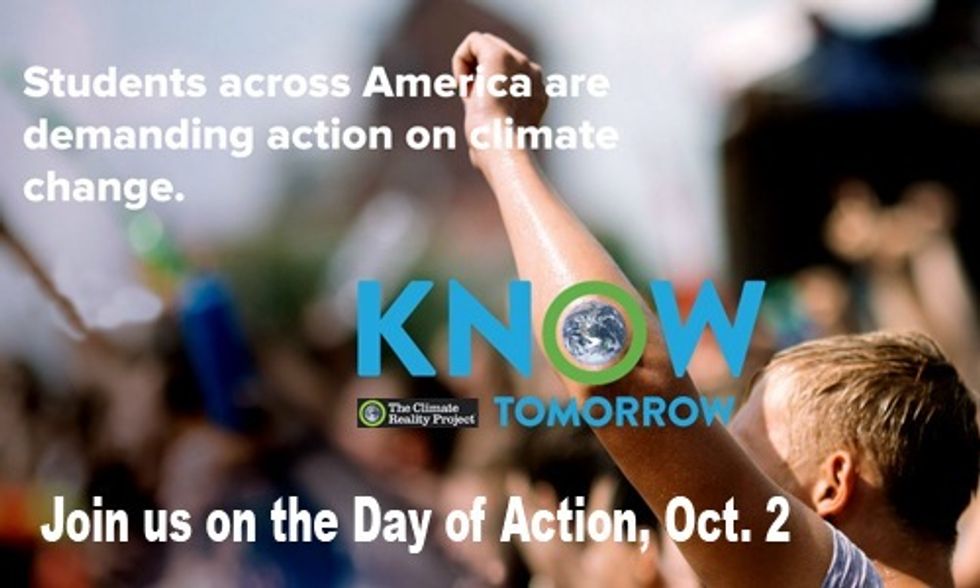 The Climate Reality Project and Cool Globes launched KNOW TOMORROW, an effort that unites and amplifies thousands of students, activists, politicians and celebrities across the country demanding climate action. A key component is a National Campus Day of Action on Oct. 2, which will help focus and leverage existing millennial support for climate action at the state level with the Clean Power Plan and internationally in the lead up to the COP21 climate negotiations in Paris.

“We want the world to hear the voices of students demanding action on climate change,” said Tulane University student Lauren Curry. “This isn’t an issue about our children or grandchildren, this is about OUR generation—and we want to ensure a better tomorrow.”

Student leaders are organizing on more than 50 campuses across the country that are critical for the implementation of the Clean Power Plan, including states that will hold political significance leading up to the 2016 presidential election.

KNOW TOMORROW not only has the support of students, professors, faculty and activists, but celebrities have weighed in to lend their support as well. Shepard Fairey is designing campus posters and musical artists—including Common, My Morning Jacket and Train, who appeared in the video below to promote the campaign. Environmental leaders such as Robert F. Kennedy, Jr. will speak on campuses, and dozens of other celebrities will lend their help via social media.

“Support for climate action is building around the world – but we can do very little without the millennial generation,” said Climate Reality President & CEO Ken Berlin. “Young people, and especially students, bring an unmatched enthusiasm to their activism—they want a say in the future of the world they will inherit. Through this new effort, we hope to empower passionate millennials with the tools they need to help solve the climate crisis.”

“It’s inspiring to see so many young people champion this cause and take ownership over the future of our planet,” said Founder of Cool Globes and KNOW TOMORROW Wendy Abrams. “A lot has changed over the past decade and I think we’re finally hitting a tipping point with the movement. Our kids know what climate change means and they know what tomorrow holds if they don’t take action now.”

National Campus Day of Action on Oct. 2 will help focus and leverage existing millennial support for climate action at the state level with the Clean Power Plan and internationally in the lead up to the COP21 climate negotiations in Paris.

KNOW TOMORROW will also help millennials add their voices to a number of other Climate Reality campaigns: student leaders will play key roles in the U.S. effort for the Road to Paris campaign, Climate Reality Leadership Corps trainings and 24 Hours of Reality: the World is Watching.