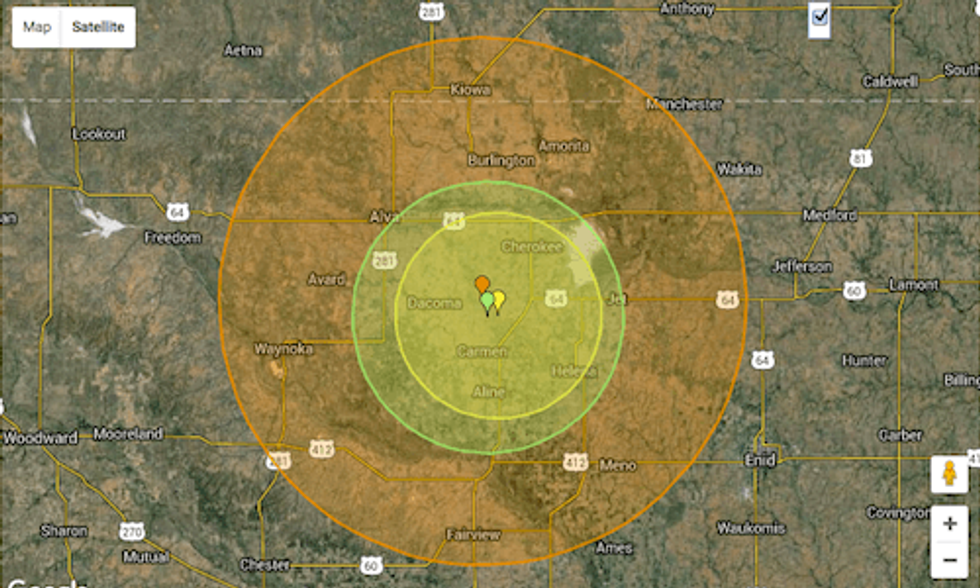 Oklahoma City's KOCO 5 News reports that the first and strongest earthquake was Oklahoma's largest since 2011.

According to Reuters, the U.S. Geological Survey (USGS) said the 1:42 a.m. quake's epicenter was centered 8 miles southwest of Cherokee, Oklahoma, with a depth of 3.8 miles.

A 4.7 magnitude earthquake and its two aftershocks rattled Oklahomans as well as its neighbors Thursday night. Photo credit: Earthquaketrack.com

While there have been no reports of significant damage, both Oklahoma and Kansas have seen repeated seismic activity over the past decade, especially in recent years. The frequent temblors have been tied to the states' drilling booms.

The Oklahoma Geological Survey concluded that the injection of wastewater byproducts into deep underground disposal wells from fracking operations has awakened the state's dormant fault lines.

Oklahoma now has more earthquakes than anywhere else in the world, a spokesperson from the Oklahoma Corporation Commission reported.

Before 2009, Oklahoma felt two earthquakes per year, but now there are two per day, EcoWatch reported in September. This year, roughly 700 earthquakes of magnitude 3 or higher has shook the state compared to a mere 20 in 2009.

In a joint statement last year, the USGS and the Oklahoma Geological Survey said that the risk of a damaging earthquake—one larger than magnitude 5.0—has significantly increased in central Oklahoma.

As for Kansas, the Washington Post reported last month that the number of earthquakes in the state have jumped from only four in 2013 to a whopping 817 in 2014.

The quakes happen so often that officials in both states have been forced to shut down multiple disposal wells. The Oklahoma Corporation Commission, which oversees the Sooner State’s oil and gas industry, required changes to 500 disposal wells around the state, including the shutdown of wells near Cushing, Oklahoma, which holds one of the largest crude oil storage facilities in the world.

The Kansas Corporation Commission also decided to limit the underground injection disposal of saltwater from oil wells in April.

In August, Oklahoma Gov. Mary Fallin admitted that there was a “direct correlation between the increase of earthquakes that we’ve seen in Oklahoma [and] disposal wells.” Fallin, however, must weigh the pros and cons of fracking in her state, as the sector provides a significant number of jobs.

Still, thousands of disposal wells in both states are still in operation, which suggests that the constant seismic activity is far from over.

Many Oklahoma and Kansas residents have voiced concerns about the earthquakes:

That earthquake is the first time I was fearful. It's not normal to happen like that in Kansas. Or is it now. #fracking
— Joanna Chadwick (@Joanna Chadwick)1447919174.0

In addition to Oklahoma and Kansas, other major oil and gas states such as Arkansas, Colorado, Ohio and Texas have observed more earthquakes that are linked to wastewater injection activity, IBTimes reported.