Stopping the Biggest Carbon Bomb on the Planet 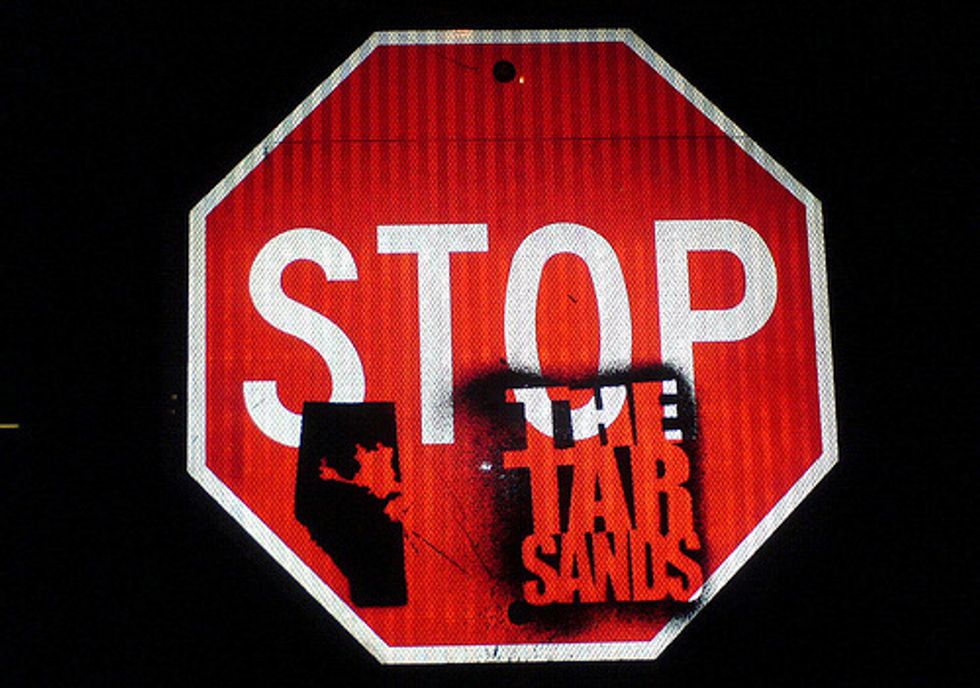 I haven't written about the Keystone XL tar sands pipeline for a while, except to try and rally support for the brave people blockading construction along its southern portion. After more than two weeks in the trees of Texas, their dramatic action is drawing more and more attention, as they reveal the recklessness and heartlessness of a company like TransCanada—the kind that will call the cops to get a great-grandmother and arrest her for "trespassing" on her own land when she protests the pipeline crossing it.

The larger part of the Keystone pipeline project—the northern leg to Canada—has been on the political back-burner since last year's massive protests. Since that northern leg would have been a fuse to the biggest carbon bomb on the planet, we counted that as a temporary victory.

The State Department is supposedly figuring out how to calculate the climate risk from the tar sands, something they failed to do last time round—but so far there's no sign they have a real plan. Neither candidate for President has expressed any opposition to building the pipeline, so it may be just a matter of weeks before we need your help again, and in a big way.

And in the meantime, we have a piece of truly good news. Our friends in Canada have done a remarkable job of organizing opposition to the so-called Northern Gateway pipeline that would carry tar sands gunk to the Pacific. As this article in Canada's leading paper put it last week, that plan is effectively dead, dashed against the rock-solid opposition of Indigenous groups, and Canadian climate activists both. With it goes the favorite talking point of Keystone backers, that "they'll just send it to China anyway."

So the Keystone fight will continue, with the stakes raised again—now Keystone is the last, best chance to export tar sands oil from Alberta.

I’ve taken two big lessons from this fight so far. The first is that when we band together, we're truly a match for the fossil fuel industry—and however the battle comes out we've already done far more than almost anyone thought possible. The second is that we can't stop global warming one pipeline at a time—even as we bottled up the tar sands, the amount of carbon in the atmosphere just kept going up, bringing us the scorching, drought plagued summer of 2012.

We have to go at the industry as a whole and persuade our fellow residents of this planet that coal and oil and gas must be kept in the ground. That's why I wrote the article for Rolling Stone about the new climate math that went viral this summer, and that's why we're turning that article into a big new campaign—the Do the Math Tour.

Some of the stops along our Do the Math tour are sold out already, but some have tickets remaining, and we hope to see you there. But only, really, if you're ready to go to work. Because we've got so much work to do. Click here to be a part of the Tour.