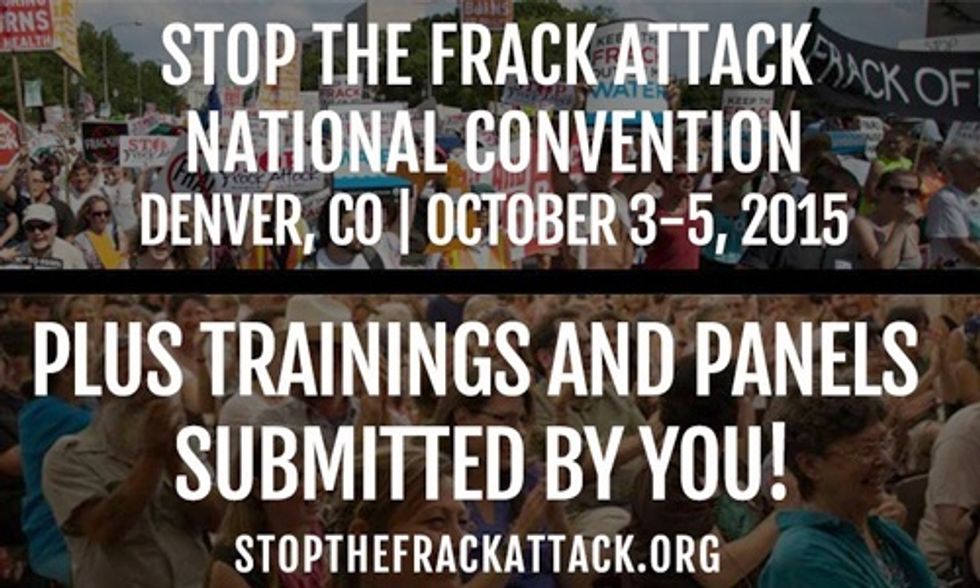 The Stop the Frack Attack Network is hosting a national summit from Oct. 3 to Oct. 5 for people concerned with the negative impacts of fracking (and all oil and gas development). That should be everybody. But if you’re reading this it probably means you. You should come.

Why? Well we’re only fighting the most profitable industry in the history of the planet: the oil and gas industry. It buys politicians. And legislation. And get-of-jail-free cards. Actually, make that never-go-to-jail cards.

But you know what? People like you and me have fought the oil and gas industry to a standstill.

After the the 2013 Dallas Summit, we won some great victories in New York and Maryland. And we struck a blow in the belly of the beast: an overwhelming, bipartisan majority voted to ban fracking in Denton, Texas—the city where modern fracking was invented. Industry’s lackeys in the Texas legislature overturned the will of Denton’s voters, but the oil and gas lobby’s aura of invincibility is well and truly gone.

Now it’s time to extend those victories to Pennsylvania, California, Colorado, Ohio and the rest of the country, and that’s why we’re coming together in Denver this October for the first time in almost three years. For the past several months grassroots activists, campaigners for non-government organizations and impacted community members have been meeting every other week to figure out what would be the most spectacular national summit for the Stop the Frack Attack network.

The summit and action will be held in Stapleton, Colorado. We will hear from acclaimed writer Chris Hedges, activist Kandi Mosset and scientist Kim Schultz. But the main event will be the coming together of people from around the country. We will have skills-based trainings, tactical and strategic sessions, educational sessions, non-violent direct action training and more. And perhaps most importantly the chance to share, in person, the wisdom of what has and hasn’t worked where you live.

We build movements by putting aside our differences, learning together and building relationships together—learning to trust each other. The summit hopes to achieve that not for just my home state of Colorado, but the whole movement. So let’s come together and do it.

We have raised more than $15,000 to provide travel scholarships to ensure that everyone who wants to come can. So don't let funding prevent you from coming.

Join me and hundreds of others this October at the Stop the Frack Attack National Summit in Denver and stand shoulder to shoulder to say no to impacts and injustices inflicted by the fracking industry on communities across the U.S.

Shane Davis is a data-miner, activist, researcher and the founder of Fractivist.org, an anti-fracking investigative blog about the Colorado oil and gas industry and the Oil and Gas Conservation Commission. He has been a member of the Stop the Frack Attack advisory council since 2014.