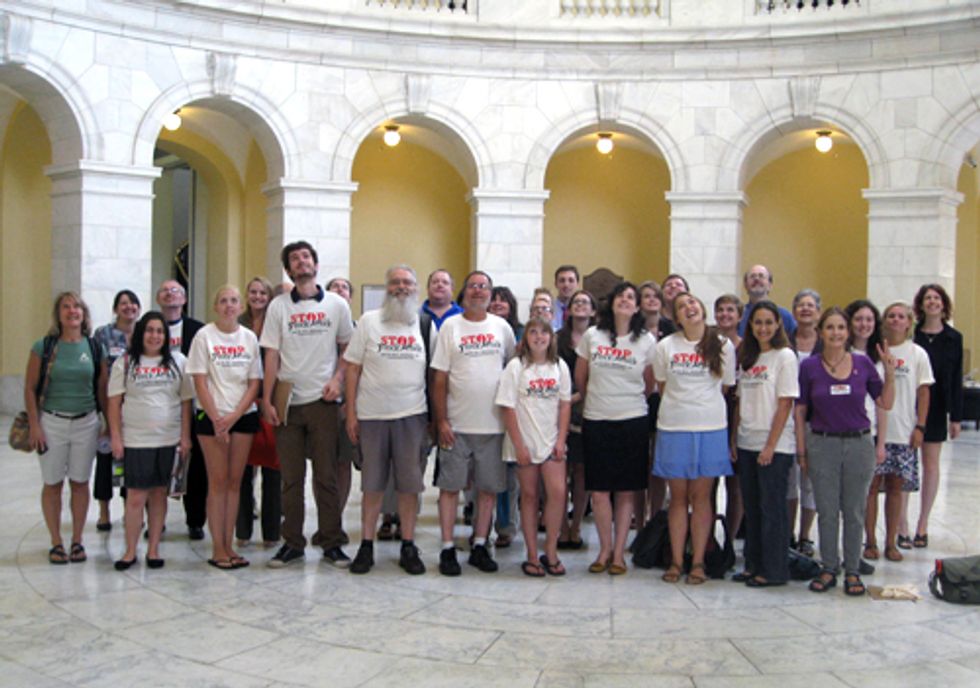 Today more than a hundred people from 23 states traveled to Capitol Hill to lobby Congress and demand that they take action to protect Americans from fracking.

Participants at the Stop the Frack Attack lobby day had the chance to hear from U.S. Representatives Diana DeGette (D-CO), Maurice Hinchey (D-NY) and Jared Polis (D-CO), who introduced the Fracturing Responsibility and Awareness of Chemicals Act (FRAC Act) in June 2009, a bill that would establish common sense safeguards to protect drinking water from risks associated with fracking.

The Frac Act (HR 1084), which was reintroduced by Rep. DeGette in 2011 and has 69 co-sponsors, would remove the oil and gas industry's exemption from the Safe Drinking Water Act and require disclosure of the chemicals used in fracking fluid.

In 2005, the Bush/Cheney Energy Bill exempted natural gas drilling companies from disclosing the chemicals used during hydraulic fracturing from the Safe Drinking Water Act. In 1974, the Safe Drinking Water Act was passed by Congress to ensure clean drinking water free from both natural and man-made contaminants. Essentially, the exemption took the U.S. Environmental Protection Agency off the job. It is now commonly referred to as the Halliburton Loophole.

Stop the Frack Attack lobbyists spent the day, among other things,  asking their elected officials to repeal the dangerous loopholes exempting the fracking industry from important environmental and public health protections.

During fracking, oil and gas companies blast millions of gallons of water laced with secret toxic chemicals into the ground to force out oil and gas from hard-to-reach deposits. A fracking-enabled gas rush has been linked to reports of poisoned drinking water, polluted air, mysterious animal deaths, earthquakes, and industrial accidents and explosions.

“In recent months, what used to be only a local issue has become a national issue. Although there’s not a well in my backyard, we’re all impacted in some way or another. People need to wake up,” said Alex Nunnelly of Tampa, Florida.

“I’m here because fracking is hurting my friends, some of whom can’t speak out because they’ve been gagged by industry nondisclosure agreements,” said Nicole Sweet from Ohio.

For more information on Stop the Frack Attack click here.

Stay tuned to EcoWatch for further coverage of Stop the Frack Attack.