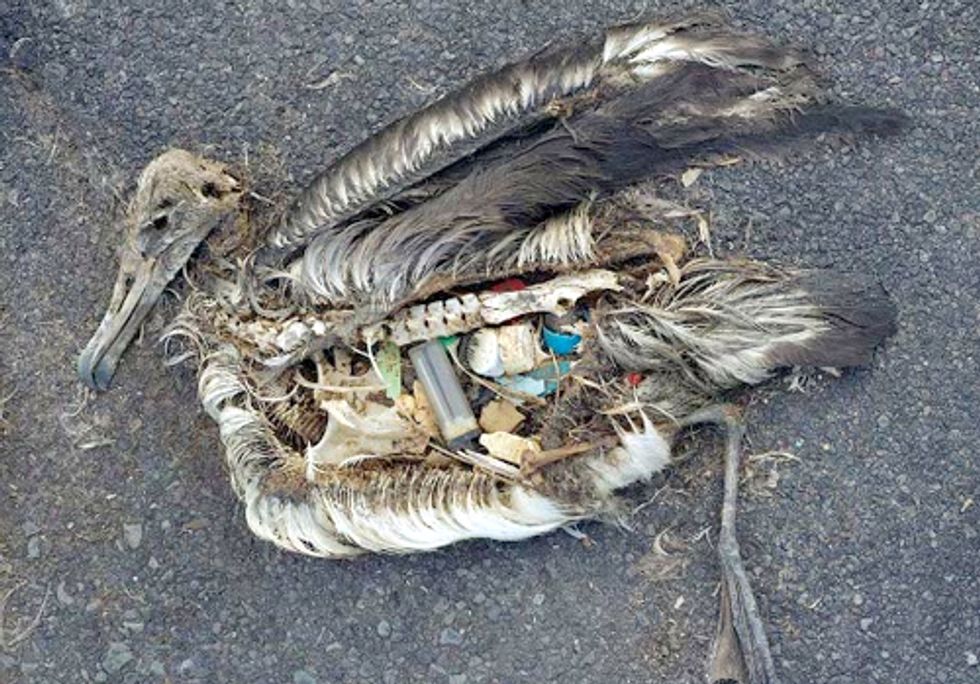 This photo of an albatross chicks was taken in September 2009 on Midway Atoll, a tiny stretch of sand and coral near the middle of the North Pacific. To document this phenomenon as faithfully as possible, not a single piece of plastic in this photograph was moved, placed, manipulated, arranged or altered in any way. This image depicts the actual stomach contents of baby birds in one of the world's most remote marine sanctuaries, more than 2,000 miles from the nearest continent. Photo by Chris Jordan - http://chrisjordan.com.

Plastic pollution off the northwest coast of North America is reaching the level of the notoriously polluted North Sea, according to a new study led by a researcher at the University of British Columbia (UBC).

The study, published online in the journal Marine Pollution Bulletin, examined stomach contents of beached northern fulmars on the coasts of British Columbia, Canada and the states of Washington and Oregon.

"Like the canary in the coal mine, northern fulmars are sentinels of plastic pollution in our oceans," says Stephanie Avery-Gomm, the study's lead author and a graduate student in UBC's Department of Zoology. "Their stomach content provides a 'snapshot' sample of plastic pollution from a large area of the northern Pacific Ocean."

Northern fulmars forage exclusively at sea and retain ingested plastics for a long period of time, making them ideal indicators for marine littering. Analysis of beached fulmars has been used to monitor plastic pollution in the North Sea since the 1980s. The latest findings, when compared to previous similar studies, indicate a substantial increase in plastic pollution over the past four decades.

The research group performed necropsies on 67 beached northern fulmars and found that 92.5 percent had plastics—such as twine, Styrofoam and candy wrappers—in their stomachs. An average of 36.8 pieces per bird were found. The average total weight of plastic was 0.385 grams per bird. One bird was found with 454 pieces of plastic in its stomach.

"The average adult northern fulmar weighs five pounds, or 2.25 kilograms," says Avery-Gomm. "While 0.385 grams in a bird may seem inconsequential to us, it's the equivalent of about five percent of their body mass. It would be like a human carrying 50 grams of plastic in our stomach—about the weight of 10 quarters."

"Despite the close proximity of the 'Great Pacific Garbage Patch,' an area of concentrated plastic pollution in the middle of the North Pacific gyre, plastic pollution has not been considered an issue of concern off our coast," says Avery-Gomm. "But we've found similar amounts and incident rates of plastic in beached northern fulmars here as those in the North Sea. This indicates it is an issue which warrants further study."

The researchers propose annual monitoring of trends in plastic pollution and the effectiveness of marine waste reduction strategies.

Visit EcoWatch's BIODIVERSITY and WATER pages for more related news on these topics.