Sting: ‘Dear Leaders, Please Do Something Quick, Time Is Up, the Planet’s Sick’ 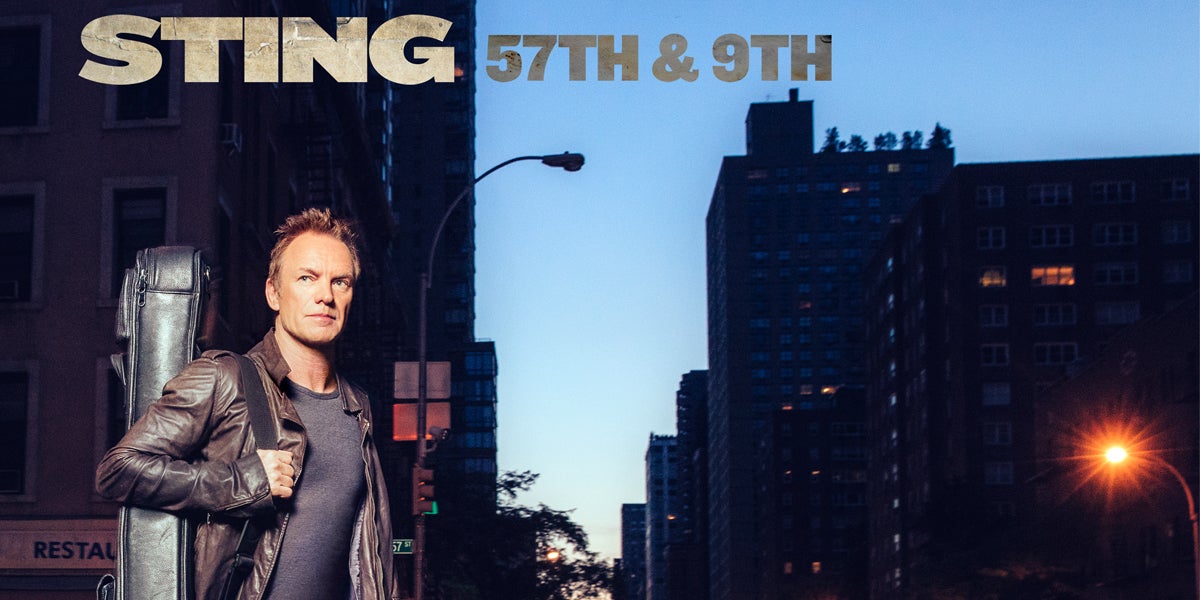 Sting and ecotheology? Seriously? What possible connection could there be between the famous pop music artist and the study of ecology and religion? Read on!

My husband Jim Schade (himself a professional musician, a seasoned jazz drummer) gifted me with Sting’s new album 57th & 9th for Christmas, knowing that I have been a huge fan since the Police in the 80s and throughout his solo career in the subsequent decades. I had been looking forward to hearing what one of my favorite singer-songwriters had produced after a three-year hiatus from recording. The album met and exceeded my expectations. Titled after the street corner he crossed daily on the way to the recording studio, the album not only exemplifies the trademark “Sting sound” of intellectual pop his fans enjoy, the songs plumb the depths of human experience and provide a poignant soundtrack for our time.

The multivalent meanings of Sting’s poetic lyrics are one of the things that keep me hooked on his music and this album does not disappoint. His songs are at once self-reflective, philosophical and poignant. They invite multiple listenings to ponder and puzzle out the hidden treasures of the words nestled between polyrhythmic drum beats and richly-layered chords.

The first two songs, I Can’t Stop Thinking About You and 50,000 were each smartly arranged with a driving rock beat. Down, Down, Down and If You Can’t Love Me are both quintessential Sting lovelorn melancholia, reminiscent of King of Pain and When We Dance. Sting does heartbreak well—not quite wallowing, but deeply engaged in the emotional pain of loss.

Longing is another theme that drifts through this album. Heading South on the Great North Road follows the yearning of wanderlust that seeks but never quite finds fulfillment; while the The Empty Chair, written for a documentary about a photojournalist who was murdered in Syria, is saturated with longing for the seat of the dead to be filled with more than just memories.

But it was when the song One Fine Day came on and I listened to these words that I realized Sting had entered new territory on this album:

Apologists say, The weather’s just a cycle we can’t change.
Scientists say, We’ve pushed those cycles way beyond.
Dear leaders, please do something quick,
Time is up, the planet’s sick…

I nearly missed my turn while driving as I listened—Sting wrote a song about climate change! After listening to the song twice, I stopped the CD to read the liner notes about this piece:

Lately I’ve begun to pray that those who regard climate change as a hoax, a hoax perpetuated for the express purpose of hobbling our economies and the profit margins of energy corporations, are correct! Perhaps it is in fact a deliberate hoax and we can all just carry on with our rapacious and profligate behavior in regards to the finite resources of this planet without a thought for future generations and the depleted world they’re likely to inherit. I sincerely and passionately hope that the skeptics are right and that the majority of scientists in the related fields of research are full of baloney, and for that … perhaps we’ll all be grateful … one fine day!

That kind of response is one I’ve given in one form or another to so many people who have argued that climate change either isn’t real or is not caused by humans. To hear the bitter irony of his words woven into a song that will be heard by thousands, perhaps million, was a much-needed balm for this weary climate activist’s soul. 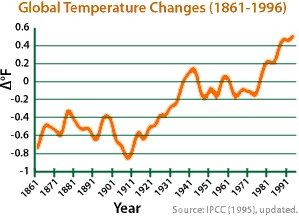 It’s no surprise that Sting would write a song about a politically contentious justice issue. Songs such as Driven to Tears (world hunger), Russians (the threat of nuclear war) and Children’s Crusade (child slavery and drug addiction) are just some examples of his socially-conscious songs. His social activism is well known, having lent his music and concert appearances for causes such as Live Aid, disaster relief and numerous human rights issues.

But what makes 57th & 9th worthy of an Ecopreacher review is the fact that three of its songs connect the subjects of climate change, religion and the refugee crisis in Syria in a way that illuminates the intersectionality of these issues. Following One Fine Day, the song Petrol Head barrels down like a ZZ-Top roadster, with Sting taking on the persona of a burly truck-driver. His growling, gravelly voice sings:

You’ll know me just like I know you,
Where every gospel word is true.
I’ll drive this car, I’ll be your guide,
Just fasten your seat belt, let’s go for a ride.
I’ll take you someplace that you’ve never been before.
A place you might have only dreamt about what’s more…
Now don’t you worry your pretty little petrol head.

Where the Patriarchal Western Industrial Complex has taken the world is certainly “someplace we’ve never been before.” The polluted and overheating planet we now inhabit is a direct result of the kind of arrogant masochism typified in this song.

But more, the song’s lyrics also highlight the complexity that religion brings to the phenomenon of consumerism fueled by oil, coal and gas:

I speak in tongues, in tongues of fire.
With sixteen wheels for my desire…

Like Moses driving to his promised land,
Left turn at the burning bush, a stick shift,

Sting is a self-avowed agnostic, but he knows his biblical references and religious imagery. “Tongues of fire” appeared over Jesus’ disciples’ heads on the day of Pentecost (Acts Chapter 2). A “chariot of fire” is what whisked the prophet Elijah to heaven (2 Kings 2:11-12). And the burning bush was the site of God’s revelation to Moses to free the Israelites from Egypt (Exodus 3). All three of these fire images in the Bible symbolize the Sacred, the divine light that is meant to free the oppressed, announce God’s justice, and shine hope into a dark world. 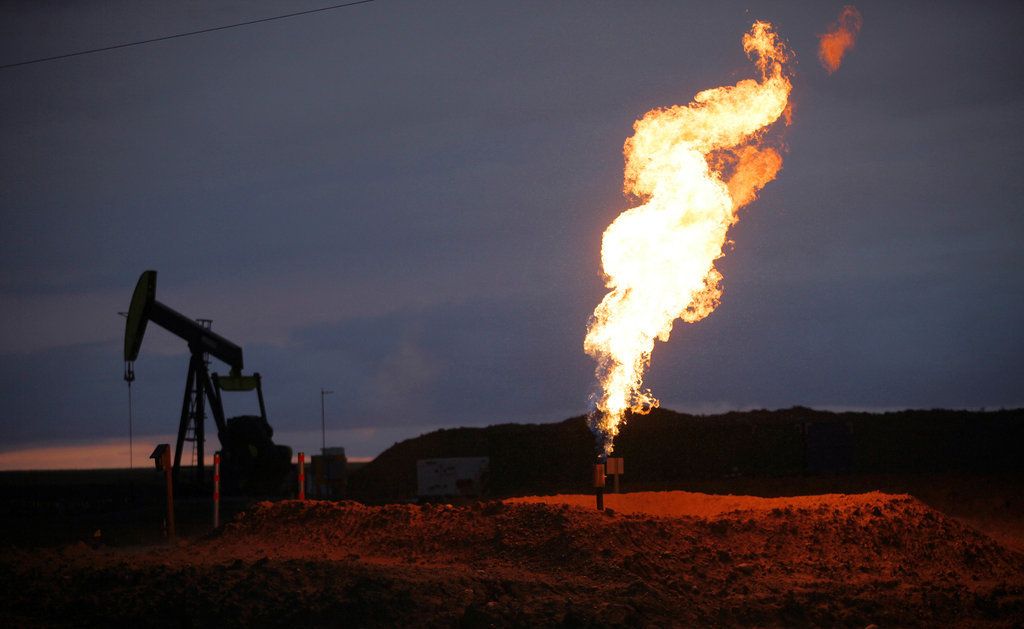 But in Petrol Head, the images burn with an unholy fire and the lyrics demonstrate what many Christians have done with this religion. They have used Christianity to justify a commercialized Manifest Destiny that masquerades as a holy edict while plundering land, water, natural resources and native peoples. As I have previously explained, fossil fuels are not God’s gift to humanity—a belief often touted by those wishing to bless extreme energy extraction with faux religious benedictions.

Where the consequences of Petrol Head and One Fine Day come together on Sting’s album is in the song Inshallah, a poignant elegy about the refugees from Syria who are fleeing their war-wracked homeland.

The title is an Arabic word meaning “if it is God’s will then it will come to pass” and brings yet another religious angle to the album. The song puts us on the boat with a Muslim father and his wife, with his child sleeping on his shoulder as they cross a dangerous sea to flee the war and seek a new life. The beautifully somber music and Sting’s plaintive voice not only evoke tearful pathos, the song is perhaps one of the most effective artistic devices I’ve encountered to help make this humanitarian crisis real for us. Reminiscent of his song They Dance Alone, about the mothers who danced for their sons and husbands who were “disappeared” by the 1970s Pinochet regime in Chile, Inshallah takes us to that place of desperation and fear, this time spraying up like the waves from the dark and threatening sea on which they travel.

Sting has said of his more politically controversial songs: “I never tackle political issues head-on. With something like ‘They Dance Alone,’ and the Pinochet regime, the metaphor was of the poor women dancing alone in front of government buildings; you could understand that metaphor whether or not you knew the political issues. I’ve never set out to write a song that is about, for example, the environment. Songwriting is much more veiled than that. The meaning reveals itself as you go into it. A song should be plastic enough for you to find different meanings there. That’s what all art does, all poetry, if you can call it that.”

He said those words in an interview with The Times in 2001. Fifteen years later, he has now written songs about the environment—and in exactly the way he describes. One Fine Day, Petrol Head and Ishallah reveal their meanings to us not just as individual songs, but in conversation with each other. And their poetry contains the essence of what it means to be human in the face of inhumanity. For example, consider this lyric in Inshallah:

Sleeping child, on my shoulder,
Those around us, curse the sea.
Anxious mother turning fearful,
Who can blame her, blaming me?

In that last line we feel the piercing unfairness experienced by a man determined to be a protector of his family, yet powerless to do so in the face of forces completely beyond his control. And with One Fine Day and Petrol Head already in our ears, we start to realize the ways in which fossil fuels, climate change and the Syrian refugee crisis are all interconnected. As I explain in a previous post, what most people don’t realize is the role that climate disruption and environmental devastation have played in exacerbating the situations in Syria and other war-torn areas. 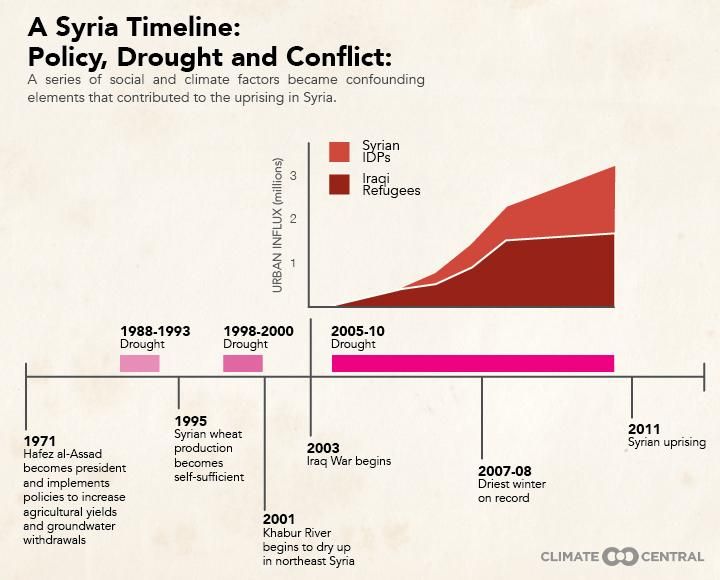 Climate change leads to drought and increased crop damage from insect infestations and blights in some places, which drives farmers away from the land and leads to uprisings. When this many people are forcibly displaced from their homes—a number higher than it has been at any time since World War II—it creates the conditions for corruption, violence and authoritarian regimes thrive. Which means that for those of us who live in countries that have burned the most fossil fuels, polluting the planet and sending the atmosphere into feverish sickness, we share some responsibility for the refugee crisis.

Like most pop music with a social conscious, Stings songs do not offer solutions to the dilemmas they portray. But that’s not their job. The bard’s role is to tell the story, to give witness to what is happening and to set it to music that enchants our ears on its way to our souls. My hope is that 57th & 9th will raise awareness of the interconnected issues of fossil fuels, climate change and the humanitarian crises to a point that listeners will be driven to take action.

Now if we could just have some powerful songs about climate change written and performed by some high-profile Country music artists … When this happens, we’ll know that the issues of climate change, human rights and the need to care for God’s Creation have finally begun to sink in. Garth Brooks? Toby Keith? Miranda Lambert? Keith Urban? Carrie Underwood? George Strait? Anyone? Anyone?

Leah D. Schade is the author of the book Creation-Crisis Preaching: Ecology, Theology and the Pulpit (Chalice Press, 2015). She is the Assistant Professor of Preaching and Worship at Lexington Theological Seminary in Kentucky, and an ordained Lutheran (ELCA) minister. Visit her website www.creationcrisispreaching.org and her blog www.ecopreacher.blogspot.com.