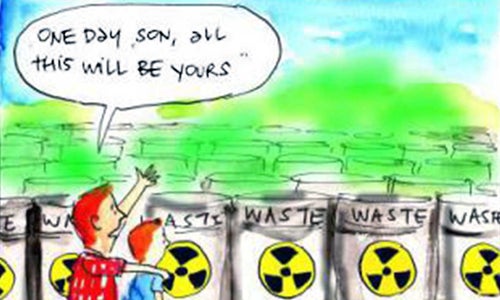 A private consortium formed to deal with Europe’s most difficult nuclear waste at a site in Britain’s beautiful Lake District has been sacked by the British government because not sufficient progress has been made in making it safe. 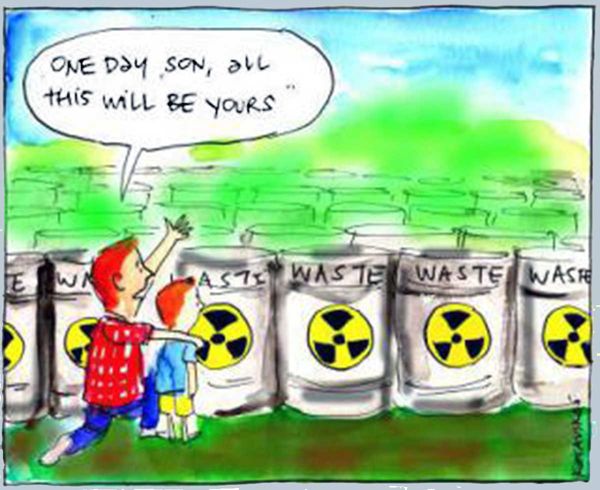 Highly radioactive waste, dangerous for as long as 200,000 years, has to be isolated and guarded in every country that has dabbled in nuclear energy. Cartoon credit: www.sanonofresafety.org/nuclear-waste/

It is the latest setback for an industry that claims nuclear power is the low-carbon answer to climate change, but has not yet found a safe resting place for radioactive rubbish it creates when nuclear fuel and machinery reaches the end of its life.

Dealing with the waste stored at this one site at Sellafield—the largest of a dozen nuclear sites in Britain—already costs the UK taxpayer £2 billion a year, and it is expected to be at least as much as this every year for half a century.

Hundreds of people are employed to prevent the radioactivity leaking or overheating to cause a nuclear disaster, and the cost of dealing with the waste at this site alone has already risen to £70 billion.

This extraordinary legacy of dangerous radioactive waste is present in every country that has adopted nuclear power as a form of electricity production, as well as those with nuclear weapons. No country has yet solved the problem of how to deal with waste that remains dangerous to humans for thousands of years.

Many countries, including Germany and Italy, have rejected nuclear power, partly because they cannot find a solution to the waste problem. But many others—including the UK, India and China—intend to go on building them even though it stores up a dangerous radioactive legacy for future generations.

The problem began after the Second World War when, in the rush to build atomic weapons, the governments of the U.S., Russia and the UK gave no heed to the high dangerous nuclear waste it was creating in the process. This problem continued, even in non-weapon states such as Germany and Japan, when nuclear power was seen as a new, cheap form of electricity production.

The belief was always that science would find some way of neutralising the dangerous radioactivity, and then it could be buried as simply as any other rubbish. This hope has proved to be ill-founded.

Highly radioactive waste, dangerous for as long as 200,000 years, has to be isolated and guarded in every country that has dabbled in nuclear energy. At Sellafield, huge water tanks filled with unknown quantities of radioactive rubbish have yet to be emptied.

The only bright spot is Sweden, which has a deep depository to dispose of short-lived waste in stable granite formations. Other similar depositories are planned along the same lines for more dangerous spent fuel, but these are still at the planning stage.

Constructing these is likely to take another 30 years, so even in Sweden storing the waste is still a long-term problem. The argument is that once the depositories have been built and sealed, the granite will be stable for millions of years—long enough for the radioactivity to decay to safe levels.

Unfortunately for most countries, they do not have these stable granite formations. Britain has granite in the Lake District, but the rock is fractured and water filters through it, raising the possibility of radioactivity leaching out.

The British government promised four years ago it would not build any more nuclear power stations until it had found a solution to this 50-year-old problem. But it has abandoned the promise because it is no nearer building a Swedish-style depository, even though it is now offering financial bribes to communities to host an underground cavern.

The official position is that Britain is still on course for finding a Swedish-style deep depository for nuclear waste, but no one can say where or when it could be built.