Stephen Hawking to Larry King: ‘We Certainly Have Not Become Less Greedy or Less Stupid’ 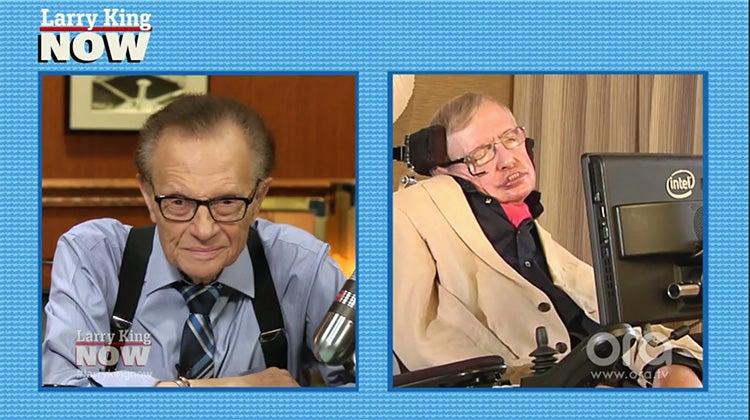 Stephen Hawking made a rare interview appearance on Larry King Now on Saturday to discuss science’s greatest discoveries, what still mystifies him about space and the state of the planet.

While the interview was less than 10 minutes long, King and Hawking covered a lot of ground. Hawking, director of research at the department of applied mathematics and theoretical physics at the University of Cambridge, joined King via video stream from the Starmus Festival, which celebrates the intersection of science and art, in the Canary Islands of Spain. This year’s festival was titled Tribute to Stephen Hawking.

Below are some highlights of the Q&A:

Q. King: Stephen, when we last spoke six years ago, you said that mankind was in danger of destroying ourselves by our greed and stupidity. Have things gotten better or worse since then?

A. Hawking: We certainly have not become less greedy or less stupid. Six years ago I was warning about pollution and overcrowding, they have gotten worse since then. The population has grown by half a billion since our last meeting with no end in sight. At this rate, it will be 11 billion by 2100. Air pollution has increased by 8 percent over the past five years.

A. Hawking: The increase in air pollution and increasing emissions of carbon dioxide. Will we be too late to avoid dangerous levels of global warming?

Q. King: What scientific discovery have surprised even you over the years?

A. Hawking: The most surprising was the discovery in 1998 that the rate of expansion of the universe is speeding up, rather than slowing down, as had been expected. This is said to be dark energy, but this is just a name given to something we don’t understand. In particular, we don’t understand why it isn’t either exactly zero or very large, or whether it is constant as the universe expands.