Stephen Colbert to Elon Musk: Are You a Superhero or Supervillain? 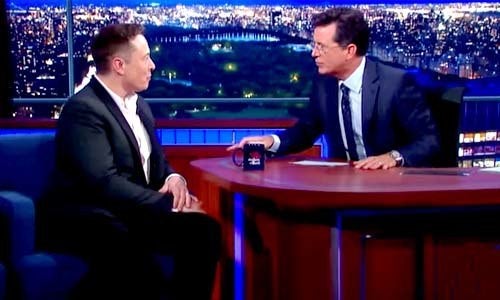 It’s only the second night of The Late Show With Stephen Colbert, and Colbert is already making headlines. He had Elon Musk, CEO of Tesla and SpaceX and chairman of SolarCity, on the show last night. Tesla’s Powerwall battery, which allows homes and small businesses to use and store energy generated from residential solar panels, is so popular that it has already sold out through 2016.

Colbert starts off by mentioning that he’s been called the “real Tony Stark” (aka Iron Man). So Colbert asks Musk, “Are you sincerely trying to save the world?” Colbert feigns confusion, telling Musk, “You’re trying to do good things and you’re a billionaire.” (Musk is worth an estimated $13 billion). “That seems a little bit like a superhero or super villain. You have to choose one.”

Musk and Colbert segue into talking about living on Mars, which Musk believes we can one day do. “Eventually you can turn Mars into an Earth-like planet,” says Musk. Colbert’s obvious question is, “How would you do that?”