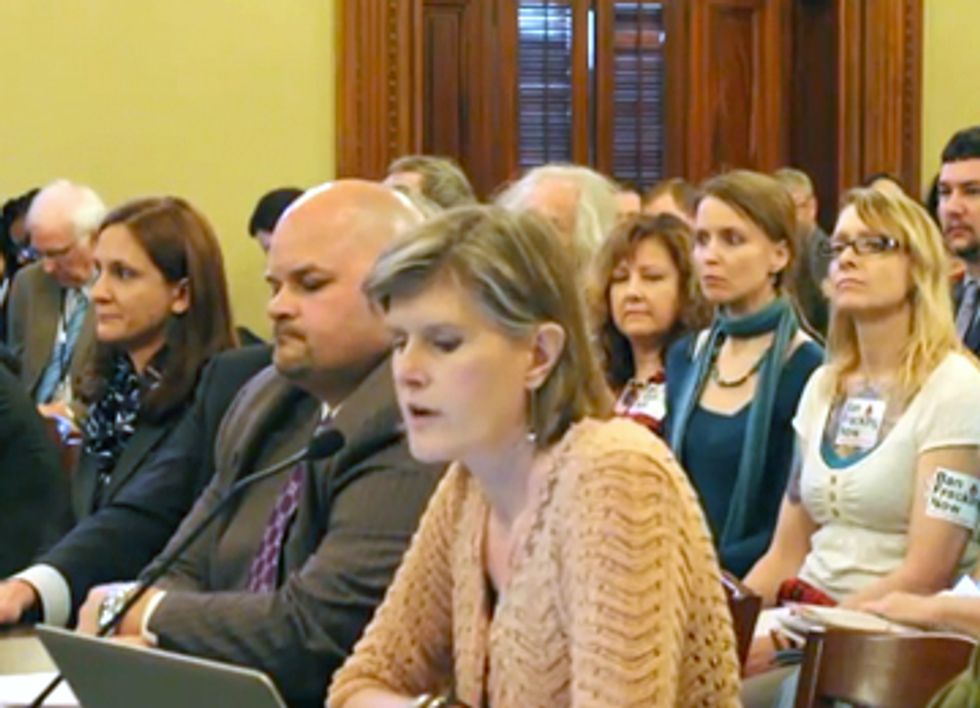 Before environmental lobbyists and legislators push a hydraulic fracking bill through the Illinois legislature, they need to sit down with farmers in Clinton County and learn how well regulations defended their water, farms and cankered lives from the contamination of coal slurry in the Pearl Aquifer.

Then they would fight to the end, like five southern Illinois county boards, for a moratorium on fracking—instead of a regulatory compromise that undercuts their efforts.

That was the advice given to me by an old farmer this week, as Illinois' controversial bill to regulate hydraulic fracturing rushes its way to a vote that will have national implications.

In the process, potentially impacted residents in southern Illinois have repeatedly raised an important question: Who should we trust to speak on behalf of protecting our water, land and lives: The moratorium stance of Dr. Sandra Steingraber or the compromising role of the Sierra Club and other environmental groups?

Left in ruins from the boom and bust cycles of heavily-mechanized coal mining by absentee coal companies, who have left behind 1,300 abandoned mines, few other regions in the country have borne the deadly burden of compromised environmental and workplace safety regulations than the coalfields of my own southern Illinois.

In a line: Anyone vaguely familiar with the history of coal mining knows that similar regulatory compromises have been disasters.

Now comes the fracking rush, and new claims by the major environmental groups of a historic compromise for regulations for "clean fracking."

Not for Steingraber, the distinguished scholar at Ithaca College, and a nationally acclaimed environmental health expert and author who grew up in Illinois.

"I stand with you for as long as takes," she said at a press conference on Monday on the moratorium, organized by the Illinois People's Action (IPA) and Southern Illinoisans Against Fracturing our Environment (SAFE), "Because when lives are at stake, you want the best possible science, you want the most comprehensive science, and we're not going to give up until we get there."

She also joined Oscar-nominated filmmaker Josh Fox at the premiere of his Gasland 2 film documentary in Normal this week.

Let me say that again, and my words here contain a special message for Illinois Attorney General Lisa Madigan who brokered the deal that produced this piece of legislation: The backers of this bill claim that it contains the strongest regulations for fracking in the nation. That is nonsense. New York State promulgated a far stricter set of rules that prohibited drilling on state lands and set aside certain watersheds as off-limits to fracking altogether—and still we rejected them.

Moreover, New York State's regulations were subject to numerous public hearings and comment periods. Hundreds of scientists provided testimony, as did thousands of business owners, farmers, faith leaders and ordinary citizens. And thrice, over nearly five years of deliberation, we've sent a deeply flawed environmental impact statement back to the drawing board.

Because of that democratic process, New Yorkers now know a lot about fracking. The more we find out, the deeper our objections.

And that's because, when you look under fracking's hood, you see terrifying problems. Behind the hard sell and soothing promises, this contraption is unsafe at any speed.

Here's what we've learned in New York: Regulations cannot prevent well casings from leaking as they age and fail. Or keep methane from migrating through underground faults. Or eliminate the 24/7 noise pollution from drilling. Regulations cannot keep benzene from rising out of boreholes. There is no good storage solution for radioactive wastewater. And the jobs fracking provides are temporary and toxic.

Thus, Attorney General Madigan needs to know that should this bill pass and become law, she will be held personally responsible for every contaminated well, every fiery explosion, every horrific accident, and every sick child.

More fundamentally, scientists haven't yet identified all the chemicals released from drilling and fracking operations. Clearly, if you don't know what impacts need mitigating, there is no way of judging if any given set of regulations sufficiently mitigates them.

A moratorium would also allow you time to study occupational health threats to the workers in the industry. These include, but are not limited to, head injuries, traffic accidents, blunt trauma, silica dust exposure and chemical exposures. Oil and gas industry workers have an on-the-job fatality rate seven times that of other industries; silica dust exposure is definitively linked to silicosis and lung cancer. With jobs creation as a central argument for the approval of fracking in Illinois, your need to understand the health and disability risks that come with these jobs.

I'll close with lines of poetry from Illinois' noble poet laureate, John Knoefple. The poem is titled, Confluence, and is set on the banks of the Sangamon River: The world in peace / This laced temple of darkening colors / It could not have been made for shambles.

With fracking, shambles is what you get. Illinois, you are worth so much more than the wisps and puddles of gas and oil inside your bedrock.

As someone who has witnessed the destruction of "regulated" coal mining on miners, families, farms and forests in southern Illinois, this sounds to me like a compromise worth fighting against.