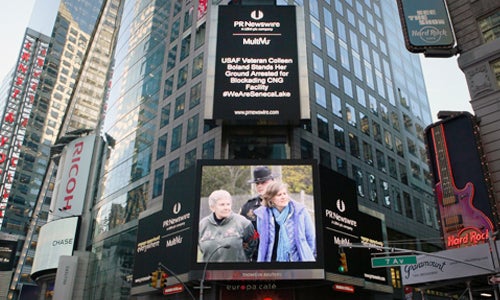 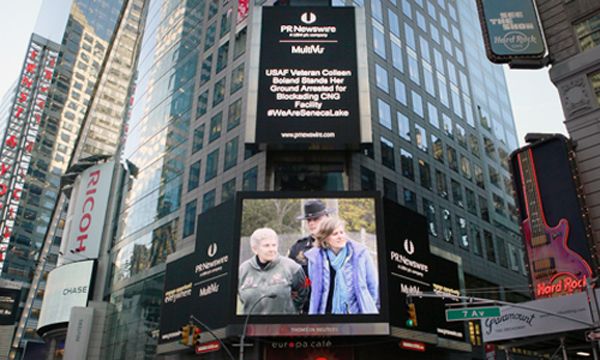 Steingraber, Boland and Micklem were arrested for blockading the gates of Texas-based Crestwood Midstream’s gas storage facility on the shore of New York’s Seneca Lake. They are part of the “We Are Seneca Lake” campaign working to stop the major expansion project at Crestwood’s methane gas storage facility where plans are underway to store highly pressurized, explosive gas in abandoned salt caverns on the west side of Seneca Lake.

Micklem, who will not have to serve his full sentence, was released yesterday afternoon for health reasons. “I’m a die-hard environmentalist and I think that if we do not protect our environment, we are all history. A man’s got to do what a man’s got to do,” said the 86-year-old.

Yesterday nine more people were arrested for trespassing while blockading the gates of Crestwood, including winery owners and local business leaders, which shut down the facility for more than seven hours. To date, there have been 61 arrests involving 56 individuals in the last four weeks. Today, 12 more people are blockading the gates at the Crestwood facility. More than 600 citizens have signed a pledge to resist the Seneca Lake fracked-gas infrastructure project.

“We Are Seneca Lake is a campaign that was born on October 23, the date of our first blockade, after we learned that approval had been granted by the Federal Energy Regulatory Commission (FERC) to expand the storage of methane in crumbling salt caverns that underlie the west bank of Seneca Lake,” said Steingraber. “In granting this approval, the federal government swept aside demonstrable evidence for reckless risks, including methane leakage, salt cavern collapse and salination of our lake. From Hutchinson, Kansas to Bayou Corne, Louisiana, salt cavern storage of gas has brought death, water contamination and economic ruin to communities.” 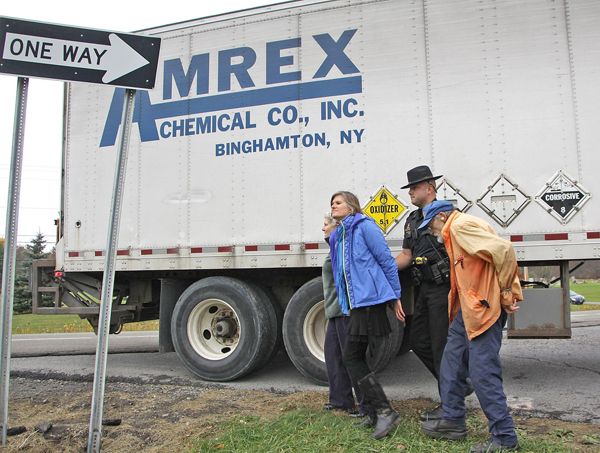 “My sister Anna and I are owners of Regional Access, a local, organic, and natural food distributor/food hub. Our father Gary Redmond started this family business, with a mission of promoting more sustainable and equitable local food systems,” said Asa Redmond, a local business owner and the drummer for the Sim Redmond Band who was arrested yesterday. “I know from first-hand experience how important the local food and wine economies are to this area. That’s why I am here with my family and friends to stand up against the proposed expansion of gas storage and industrialization of this beautiful area we all call home for our families and businesses.”

Watch Steingraber explain why people are fighting so hard to stop Crestwood:

10 Arrested as ‘We Are Seneca Lake’ Protests Continue