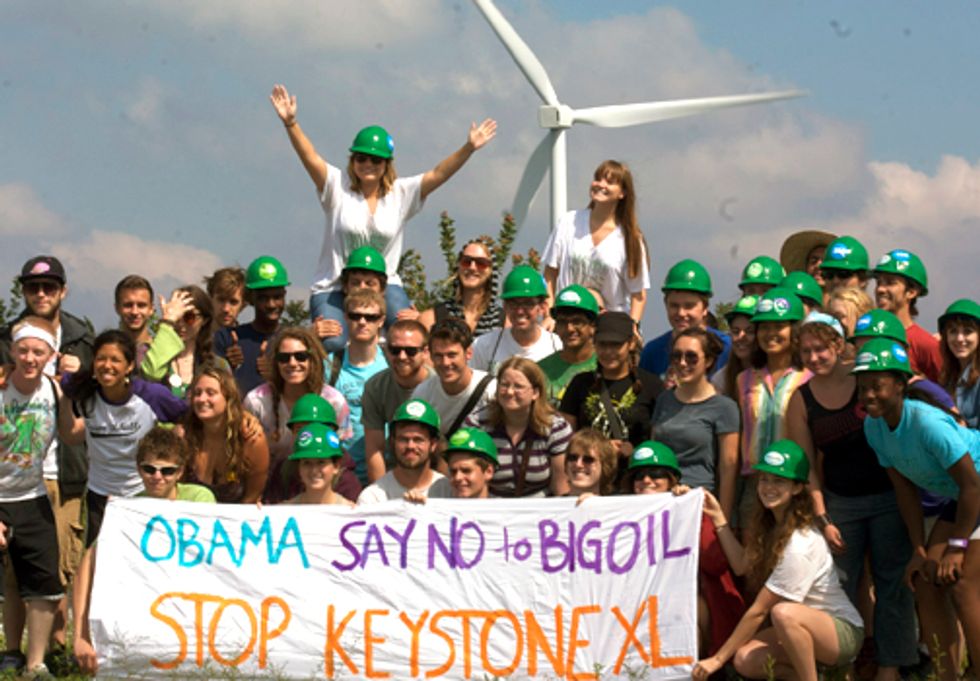 Not completely. The president didn’t outright reject the pipeline permit. My particular fantasy—that he would invite the 1253 people arrested on his doorstep in August inside the gates for a victory picnic by the vegetable garden—didn’t materialize.

But a few minutes ago the president sent the pipeline back to the State Department for a thorough re-review, which most analysts are saying will effectively kill the project. The president explicitly noted climate change, along with the pipeline route, as one of the factors that a new review would need to assess. There’s no way, with an honest review, that a pipeline that helps speed the tapping of the world’s second-largest pool of carbon can pass environmental muster.

And he has made clear that the environmental assessment won’t be carried out by cronies of the pipeline company—that it will be an expert and independent assessment. We will watch that process like hawks, making sure that it doesn’t succumb to more cronyism. Perhaps this effort will go some tiny way towards cleaning up the Washington culture of corporate dominance that came so dramatically to light here in emails and lobbyist disclosure forms.

It’s important to understand how unlikely this victory is. Six months ago, almost no one outside the pipeline route even knew about Keystone. One month ago, a secret poll of “energy insiders” by the National Journal found that “virtually all” expected easy approval of the pipeline by year’s end. As late as last week the CBC reported that Transcanada was moving huge quantities of pipe across the border and seizing land by eminent domain, certain that its permit would be granted. A done deal has come spectacularly undone.

The American people spoke loudly about climate change and the president responded. There have been few even partial victories about global warming in recent years so that makes this an important day.

The president deserves thanks for making this call—it’s not easy in the face of the fossil fuel industry and its endless reserves of cash. The deepest thanks, however, go to you—to our indigenous peoples who began the fight, to the folks in Nebraska who rallied so fiercely, to the scientists who explained the stakes, to the environmental groups who joined with passionate common purpose, to the campuses that lit up with activity, to the faith leaders that raised a moral cry, to the labor leaders who recognized where our economic future lies, to the Occupy movement that helped galvanize revulsion at insider dealing, and most of all to the people in every state and province who built the movement that made this decision inevitable.

Our fight, of course, is barely begun. Some in our movement will say that this decision is just politics as usual—that the president wants us off the streets, and off his front lawn, until after the election, at which point the administration can approve the pipeline, alienating its supporters without electoral consequence. The president should know that if this pipeline proposal somehow reemerges from the review process we will use every tool at our disposal to keep it from ever being built. If there’s a lesson of the last few months, both in our work and in the Occupy encampments around the world, it’s that sometimes we have to put our bodies on the line.

We need to let the president and oil companies know that we're ready to take action should they try to push this pipeline through in a couple of years. There's a pledge to take nonviolent action against the pipeline up on our site, and I'll be keeping your names and emails safely stored away so that you'll be the first to know about anything we need to do down the road. You can sign the pledge here.

In the meantime, since federal action will be in abeyance for a long stretch, we need to figure out how best to support our Canadian brothers and sisters, who are effectively battling against proposed pipelines west from the tar sands to the Pacific. And we need to broaden our work to take on all the forms of ‘extreme energy’ now coming to the fore—mountaintop removal coal mining, deepsea oil drilling, fracking for gas and oil. We’ll keep sending you updates from tarsandsaction.org. You keep letting us know what we need to do next.

Last week, scientists announced that the planet had poured a record amount of CO2 into the atmosphere last year. That’s a sign of how desperate our battle is. But we take courage from today’s White House announcement—it gives us some clues about how to fight going forward.

And I simply can’t say thank you enough. I know, because of my own weariness, how hard so many of you have worked. It was good work, done in the right spirit, and it has secured an unlikely victory. You are the cause of that victory. You upended enormous odds.

I’m going to bed tired tonight. But I’ll get up in the morning ready for the next battle, more confident because I know you’re part of this fight too.