State-by-State Look at the Shift in Spring's Arrival 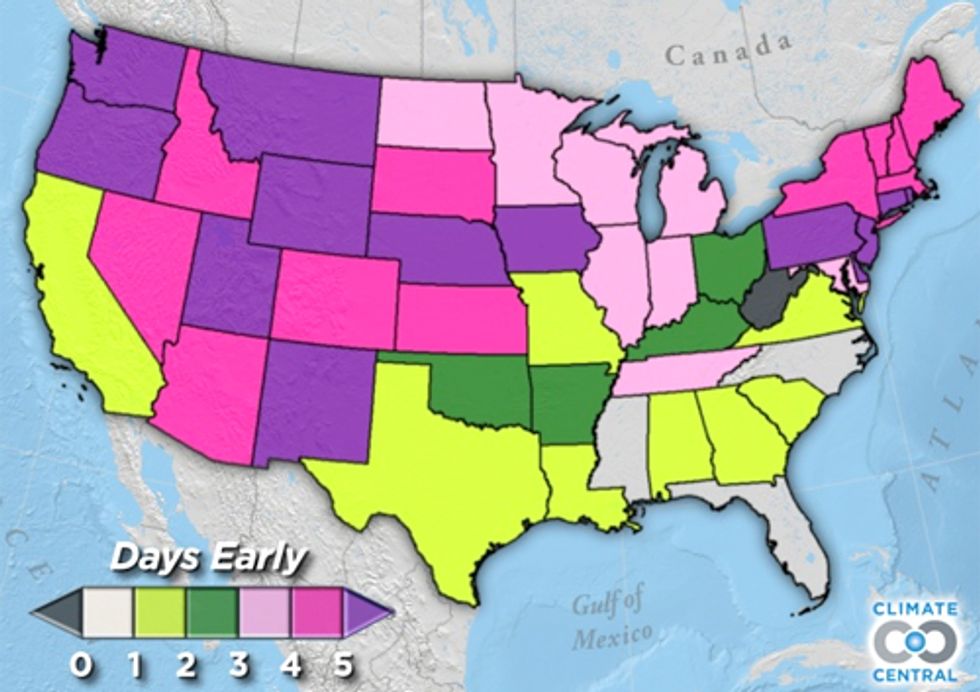 For most of the country spring has sprung earlier this year, but is this anything more than a single warm year? It seems that it is. Over the past several decades, with the exception of the Southeast, spring weather has indeed been arriving earlier.

In the interactive below, you can see how much earlier spring has arrived state-by-state, measured by the date of first leaf. As you hover over any state, it'll display two boxes—a gray box that represents the day spring used to arrive (based on the 1951-1980 average) and a colored box that represents how much earlier spring has arrived (based on the 1981-2010 average).

Nationwide, the date of “first leaf” has clearly shifted—arriving roughly 4 days earlier now on March 17 (1981-2010 average) from March 20 (1951-1980 average). This shift affects all sorts of biological processes that are triggered by warmer temperatures—not just flowering, but animal migration and giving birth and the shedding of winter coats and the emergence from cocoons. How much will an earlier spring disrupt the intricate natural balance between the tens of thousands of species that depend on each other for food, reproduction and ultimately, survival?  No one really knows.

The data behind the map comes from an index for the onset of spring developed by Mark D. Schwartz (University of Wisconsin-Milwaukee) and USA National Phenology Network colleagues. The index, based on temperature variables measured at individual weather stations, estimates the first day that leaves appear on plants in a given state. To come up with a U.S. estimate as a whole, we took the average change across 716 weather stations spread across the lower 48 states.