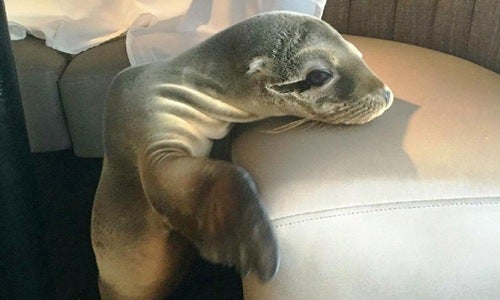 Experts at SeaWorld got an unusual call Thursday morning from the Marine Room, an upscale oceanfront restaurant in La Jolla, California. Rescuers found an 8-month-old female sea lion asleep in a dining booth.

“The pup was severely underweight and dehydrated,” The Guardian reported. “The pup was taken to SeaWorld’s animal rescue center, and experts are cautiously optimistic about her recovery.”

Fans of the page chimed in as well.

“He went to the right place for some good eats!” one commented.

“Aww, poor little kid. He must have needed some rest and lobster bisque,” another replied.

All jokes aside, there has been a dramatic rise in sea lion and seal strandings in the past few years along California’s coast. As of October 2015, at least 80 endangered fur seals ended up on California’s shore emaciated, dehydrated or dead. That’s a rate eight times higher than what’s documented in a typical year. Of the 80 fur seals, 42 were found dead and only 16 of the 38 found alive survived.

And last summer, a VICE News documentary revealed that a record 3,400 California sea lions washed ashore along California’s coast. The number of sea lion strandings in 2015 alone surpassed the total number of strandings combined from 2004-2012.

Scientists think the unusually warm waters in the eastern Pacific Ocean could be affecting the health of marine mammals. The large swath of unseasonably hot water is wreaking havoc on everything from Washington’s crabs to Oregon’s algae, and it could be pushing fish species that seals and sea lions rely on as food sources farther north than the animals can travel.

Overfishing of Pacific sardines is also to blame for the increased number of sea lion strandings, according to Ben Enticknap and Geoff Shester of the marine conservation organization Oceana. “Pacific sardines are a critically important forage fish that provide the nutrition and fats necessary for nursing California sea lion pups and newly-weaned pups foraging on their own,” they said.

“Although other prey like market squid and rockfish were available, these alone did not provide the adequate nutrition the pups needed. Sardines are a much more energy-rich food source and critical in the diet of nursing sea lions.”