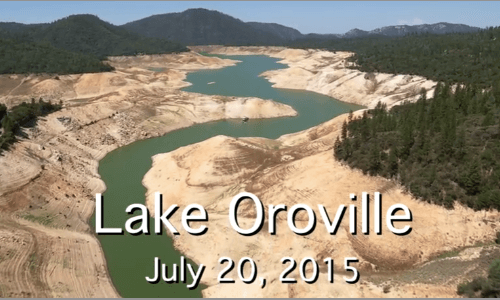 If you’re wondering how much damage four years of an epic drought can wreck, look no further than the condition of California’s depleted reservoirs. In new footage of the Folsom, Oroville and Shasta reservoirs—captured by the California Department of Water Resources (CA-DWR) on July 20—it’s genuinely startling to see how little water remains.

The CA-DWR wrote on Facebook that Folsom Lake measured at 34 percent of capacity, Lake Oroville at 35 percent and Lake Shasta at 45 percent.

Jay Famiglietti, senior water scientist at NASA’s Jet Propulsion Laboratory and a professor at UC Irvine, estimated that California’s reservoirs have only about a one-year supply of water remaining.

These before-and-after images from the CA-DWR illustrate the extent of the drought’s damage even further. (But don’t be too alarmed, “reservoirs provide only a portion of the water used in California and are designed to store only a few years’ supply,” the Los Angeles Times noted). 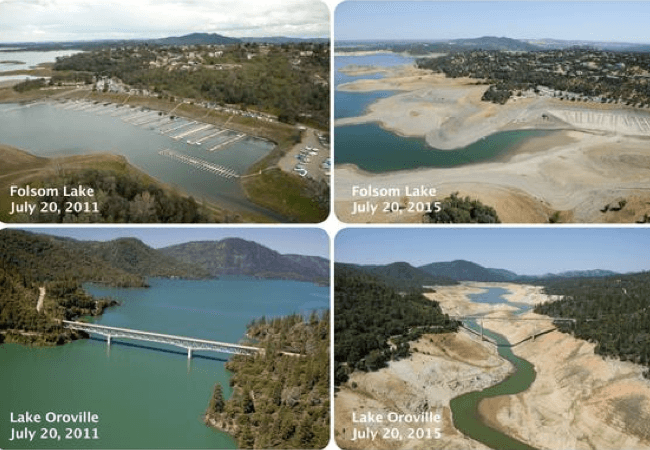 The ongoing drought has left a profound impact on California water resources. So much has changed in just four years. Photo credit: CA-DWR

CityLab noted that 71 percent of California is currently experiencing “extreme” or “exceptional drought,” while 100 percent of the state is experiencing some form of drought.

Meanwhile, conditions across the drought-wracked region are continuing to break records. Temperatures in the Northwest are in the 90s-100s, at 10 to 15 degrees above normal and even 20 degrees in a few locations, according Accuweather.

Additionally, in a new study cited by Climate Central, “the amount of rain that California has missed out on since the beginning of its record-setting drought in 2012 is about the same amount it would see, on average, in a single year.”

“To dig out of the drought in just one winter, the state would have to see 200 percent of its normal yearly rain, to cover both that year’s rain and make up the missing amount,” Climate Central reported.

There’s hope that El Niño will bring some relief, however the DWR is uncertain if the rain will reverse any damage already done to the reservoirs.

“Scientists say there’s a 90-percent chance of a strong one forming in the Pacific this winter, but will rain fill Northern California reservoirs?” the department asked. “State Climatologist Mike Anderson says this drama’s ending is still unwritten: ‘Unfortunately, even a strong El Niño doesn’t correlate to a particular outcome for California.'”

What does drought look like? Check out these pics of Shasta Lake, Folsom Lake and Lake Oroville. #saveourwater pic.twitter.com/Zedgib3InX
— CA – DWR (@CA_DWR) July 22, 2015

On an encouraging note, water-conscious west coasters are making strides in cutting back on water usage, and Californians are exceeding the 25 percent cutback mandated by Gov. Jerry Brown.

The state’s water board announced that despite the record-breaking heat in June, Californians continued to conserve water, reducing water use by 27.3 percent. Additionally, urban water suppliers exceeded the statewide conservation goal, saving 59.4 billion gallons (182,151 acre-feet), as compared to the same time in 2013.

“Californians understand the severity of the drought and they are taking action, as shown by the numbers released today,” said Felicia Marcus, chair of the State Water Resources Control Board.

“We didn’t know if the positive showing in May was due in part to cooler temperatures. This report shows that residents knew they had to keep conserving even during the summer heat and they kept the sprinklers off more than they would in a normal year,” she continued. “That’s the right attitude as we head into August and September heat—in the drought of the century with no certain end date.”