Stars Launch Save the Arctic Campaign 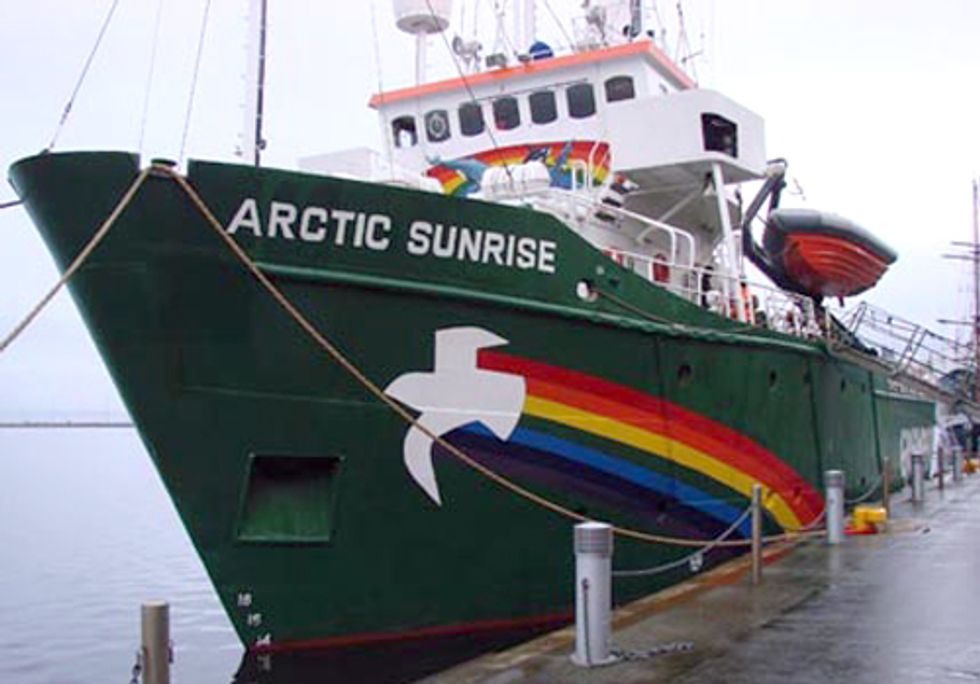 Stars from the worlds of music, film, TV and business are launching a campaign today to save the Arctic.

Sir Paul McCartney, Penelope Cruz, Robert Redford, One Direction, Alexandra Burke, Jarvis Cocker and Sir Richard Branson are among dozens of famous names who are asking for a global sanctuary in the Arctic. They have joined forces with Greenpeace to demand that oil drilling and unsustainable fishing are banned in Arctic waters.

They are among the first one hundred names to be written on an Arctic Scroll, which is launched by Greenpeace today at the Rio Earth Summit. When a million others add their own names Greenpeace will embark on an expedition to plant it on the seabed at the North Pole, four kilometres beneath the ice. The spot will be marked by a flag for the future designed by the youth of the world.

Anybody in the world can add their name to the Arctic Scroll and have their name planted beneath the pole by clicking here.

The huge expanse around the pole belongs to all of us because it is defined in international law as the high seas. But as temperatures rise and the ice melts the Arctic states—Russia, Canada, the U.S., Norway and Denmark—are making territorial claims on the seabed so they can open the door to oil companies. Arctic sea ice has retreated dramatically in recent years and scientists say the North Pole could soon be ice free.

The campaign is formally launched today at the Rio Earth Summit at a press conference (details below) hosted by Greenpeace International Executive Director Kumi Naidoo, Sir Richard Branson and actress Lucy Lawless, star of Battlestar Galactica and Xena: Warrior Princess. Lucy will be sentenced in September after scaling oil company Shell's Arctic drilling rig and blocking its operations for 72 hours in New Zealand in February.

Sir Paul McCartney said: "The Arctic is one of the most beautiful and last untouched regions on our planet, but now it's under threat. Some countries and companies want to open it up to oil drilling and industrial fishing and do to the Arctic what they've done to the rest of our fragile planet. It seems madness that we are willing to go to the ends of the Earth to find the last drops of oil when our best scientific minds are telling us we need to get off fossil fuels to give our children a future. At some time, in some place, we need to take a stand. I believe that time is now and that place is the Arctic."

Greenpeace International Executive Director Kumi Naidoo said: "The Arctic is coming under assault and needs people from around the world to stand up and demand action to protect it. A ban on offshore oil drilling and unsustainable fishing would be a huge victory against the forces ranged against this precious region and the four million people who live there. And a sanctuary in the uninhabited area around the pole would in a stroke stop the polluters colonizing the top of the world without infringing on the rights of Indigenous communities."

As part of today's launch, polar bears have been appearing in cities around the world.

Shell is due to begin exploratory drilling at two offshore sites in the Alaskan Arctic in the coming weeks. If Shell is successful this summer, an Arctic oil rush will be sparked and the push to carve up the region will accelerate. Russian oil giant Gazprom is also pushing into the offshore Arctic this year.

In 2007 Russian explorer Artur Chilingarov planted a Russian flag on the seabed beneath the pole and 'claimed' it for Moscow. Wikileaks documents later revealed he was acting on the instructions of the Russian government. Now Greenpeace is planting the names of a million global citizens beneath the pole and marking the spot with a flag for the future designed by children in a global competition organized by the ten million-strong Girl Guide movement.

The campaign will initially focus on pushing for a UN resolution demanding a global sanctuary around the pole and a ban on oil drilling and unsustainable fishing in the wider Arctic. The campaign was launched today because the Arctic Circle is defined as the area of the globe which on the longest day—June 21—experiences 24 hours of sunlight. On June 21 the sun never sets on the Arctic.

Rodion Sulyandziga from the Udega People and first vice president of RAIPON (Russian Association of Indigenous Peoples of the North) said:

"At present, the Arctic—one of the last unique and intact places on Earth—is facing a real threat from active oil drilling. A large scale oil exploration 'development' can irreversibly destroy the virgin purity of the Arctic region, putting at stake the physical existence and survival of Indigenous Peoples who, without their traditional living patterns, without their eternal habitat, will have no future."

Three Arctic states, the U.S., Canada and Russia were responsible for sinking an Oceans Rescue Plan in Rio which would protect the vulnerable marine life of the Arctic's international waters and enable the establishment of a sanctuary in the area around the pole.

Kumi Naidoo added: "We're drawing a line in the ice and saying to polluters 'you come no further.' People ask me why I, as an African, care so deeply about the Arctic, but the answer is simple. The Arctic is the world's refrigerator, it keeps us cool by reflecting the sun's energy off its icy surface, but as the ice melts it's accelerating global warming, threatening lives and livelihoods on every continent. Wherever we come from, the Arctic is our destiny."