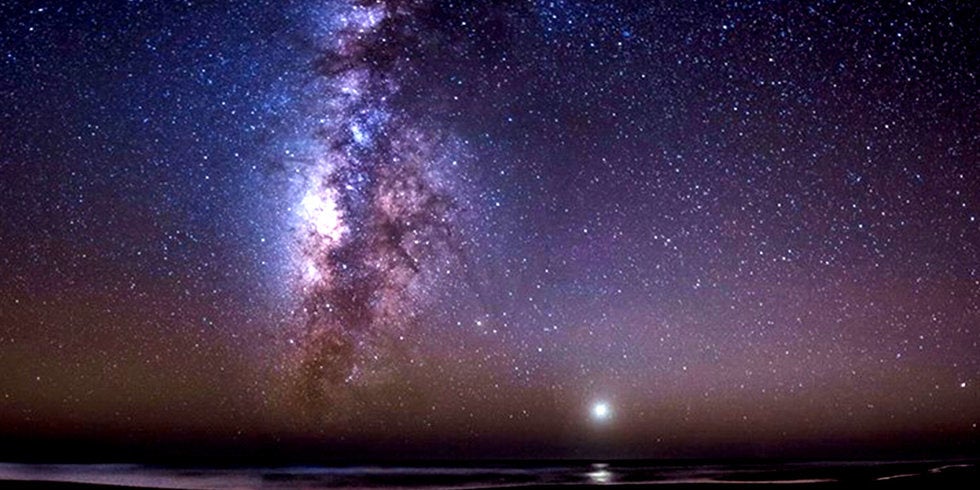 Venus is often mistaken for a plane because of its brilliance; it shines more brightly than all the other planets because of its location close to Earth and its thick, reflective clouds. The common phrase “the evening star” usually doesn’t refer to a star at all; it’s Venus. When it stands alone in the west after sunset, as it has over the past month, Venus is the first bright object to burst through the fading twilight.

In April, Venus is positioned farther from the sun. More sunlight will be cast upon its surface from our point of view, giving the planet a nearly full or gibbous shape. Later this year, as Venus comes nearer and begins to edge between the sun and Earth, the planet’s overall size will increase as its phase decreases. By fall, Venus will be a slim crescent with a fraction of its surface lit as it passes between us and the sun, changing from an evening object to a morning object for earthly observers.

A view through binoculars or a telescope can show the phases of this shining planet. Both Mercury and Venus, being inside Earth’s orbit around the sun, have phases similar to the moon. For pretty, wide-field photos of the planets, stars and sky, get your camera ready for the following dates:

On April 17, catch a crescent moon not far from Venus. On April 18, the moon will be mingling with the stars of the Hyades Cluster, close to the bright star Aldebaran in Taurus. Venus itself is heading into Taurus, when it approaches the compact Pleiades cluster around April 25.

A half-lit moon veers close to the Beehive Cluster in Cancer on April 22. Two days later, the moon will pass by the bluish-white star Regulus in Leo; on April 28 it will be in the vicinity of the star Spica in Virgo. The full moon this month occurs on April 29; on April 30, the slightly waning moon rises near Jupiter, which is nestled among the scales of Libra.

Insomniacs can look to the skies to occupy the quiet hours as yellowish Saturn and reddish Mars rise in the southeast. The two planets are close together at the beginning of April in a region of space chock-full of deep-sky wonders. Use binoculars to glimpse the rings of Saturn and maybe a white polar region on Mars, then scan the surrounding area for globular clusters and nebulae. The two planets lie in Sagittarius, a constellation located over the thickest part of the Milky Way that contains the direction of the galactic center. Mars and Saturn separate as the month goes on, but not before the moon joins the scene on April 7.

The Lyrid meteor shower peaks overnight April 22/23. With up to 18 meteors an hour and the moon not too bright at first-quarter phase, conditions favor a decent show.

What Does Space Research Cost the Earth?