Starbucks to Require All U.S. Customers to Mask Up 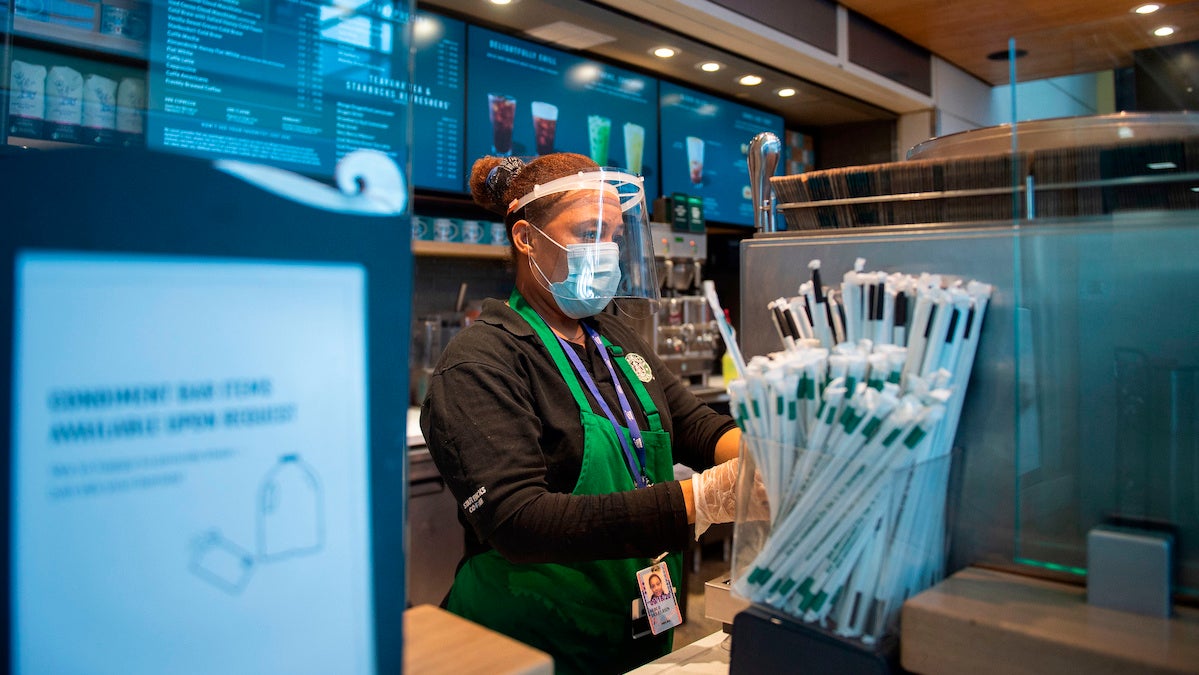 A Starbucks employee in a mask and face shield at Ronald Reagan Washington National Airport in Arlington, Virginia, on May 12, 2020. ANDREW CABALLERO-REYNOLDS / AFP via Getty Images

Anyone entering a U.S. Starbucks from July 15 will have to wear a face mask, the company announced Thursday.

The policy comes as U.S. coronavirus cases continue to surge, with the country breaking its record for new cases Thursday for the sixth time in 10 days, with more than 59,880 new cases reported, according to The New York Times.

“The company is committed to playing a constructive role in supporting health and government officials as they work to mitigate the spread of COVID-19,” Starbucks said in its statement.

Our priority is the health and well-being of our partners (employees) and customers. Starting July 15, U.S. company-owned Starbucks locations will require customers to wear facial coverings while visiting the café. Learn more: https://t.co/ldDfwTRe3n pic.twitter.com/1m0cMKChoV

Other companies that require customers to wear masks include Costco and Uber, according to USA TODAY. Around 20 states and Washington, DC already require masks in public places, but other states, including hotspots like Arizona and Florida, do not, CNN reported.

In those states, Starbucks customers who chose not to wear masks can order their coffee at the drive-thru, use curbside pickup through the Starbucks app or have orders delivered by Starbucks Delivers, the company said.

Starbucks has required employees to wear masks since April, according to CNN. But masks are most effective at preventing wearers from spreading the virus to others, according to the Centers for Disease Control and Prevention (CDC), meaning the more people who wear one, the more everyone is protected.

“Cloth face coverings are most likely to reduce the spread of COVID-19 when they are widely used by people in public settings,” the CDC wrote.

One study of households in Beijing where one person was infected with the virus found that if everyone in the home wore a mask before they knew anyone was sick, it reduced the risk of transmission by 79 percent, according to NPR. And a model found that if 80 percent of people wore masks, it would be more effective at combating COVID-19 than a lockdown, University of California San Francisco explained.

But mask requirements have led to conflicts in retail settings. One confrontation at a Starbucks went the other kind of viral, CBS News reported. When San Diego yoga instructor Amber Lynn Gilles was asked to wear a mask at a local Starbucks in accordance with county rules, she took to Facebook to complain. The act backfired. She was widely criticized, and a GoFundMe for the barista who asked her to mask up, Lenin Gutierrez, raised more than 0,000.

Reactions by angry customers at other retail establishments have prompted the Retail Industry Leaders Association to write a letter to the the National Governors Association urging states to require masks across the board, as USA TODAY reported Wednesday.

The retail body, which represents large chains including Walmart, Target, Best Buy, Walgreens and Home Depot, said that the current patchwork of state and local mask rules had led to confusion, which increased employee-customer confrontations.

“Retailers are alarmed with the instances of hostility and violence front-line employees are experiencing by a vocal minority of customers who are under the misguided impression that wearing a mask is a violation of their civil liberties,” retail association President Brian Dodge wrote in the letter.