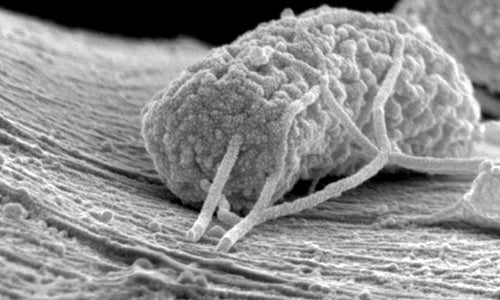 Scientists at Stanford University produced a battery that generates electricity from an unlikely resource—sewage.

Their microbial battery won’t be powering neighborhoods, but they believe it could aid the power used to treat wastewater, which accounts for about 3 percent of energy in developed nations like the U.S. The researchers hope the prototype, which is about the size of a D-battery, will be used in sewage plants as well as to break down organic pollutants in the dead zones of lakes and coastal waters where fertilizer runoff and other organic waste can deplete oxygen levels and suffocate marine habitants. 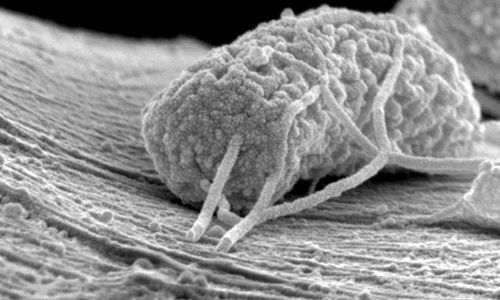 The tubular growth depicted here is a type of microbe that can produce electricity. Its wire-like tendrils are attached to a carbon filament. This image is taken with a scanning electron microscope. Photo credit: Xing Xie

Craig Criddle, the paper’s co-author, an environmental engineer and Stanford Woods Institute senior fellow, referred to the practice as “fishing for electrons.”

The Stanford engineers believe the battery can extract about 30 percent of the potential energy locked in wastewater. They estimate that percentage is nearly equal to the efficiency of the market’s best solar cells when they convert sunlight into electricity.

The Stanford team says it will be a while before the product is fully developed, let alone used at treatments plants. The fellows continue to look for inexpensive and efficient material for the battery’s positive node.

“We demonstrated the principle using silver oxide, but silver is too expensive for use at large scale,” said Yi Cui, a materials scientist and associate professor of materials science and engineering. “Though the search is under way for a more practical material, finding a substitute will take time.”