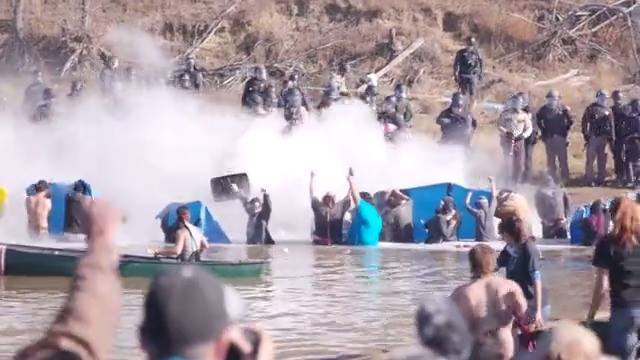 The Wallace Global Fund awarded the inaugural Henry A. Wallace Award and a $250,000 prize to the Standing Rock Sioux Tribe for its unyielding courage in the fight against the Dakota Access Pipeline, and its dedication to transitioning to renewable energy. In addition to the $250,000 prize, the tribe will receive up to a $1 million investment from the Wallace Global Fund to support its transition toward fossil fuel independence.

The award was presented to Tribal Chairman David Archambault II at an award ceremony in New York on Thursday; a donor and investor lunch briefing followed the ceremony to highlight solar and wind energy projects underway at the Standing Rock Reservation.

The Henry A. Wallace Award was established in 2017 by the Wallace Global Fund to lift up the extraordinary courage and will it takes to stand up to oppressive corporate and political power. Henry A. Wallace was a visionary and progressive advocate who served as the 33rd vice president of the U.S. under President Franklin D. Roosevelt.

“Our foundation is guided by my grandfather’s framing of a mighty struggle that continues to this day: protecting the interests of what he called the ‘common man’—ordinary people—against the oppressive combination of corporate and governmental power. Democracy, he said, ‘must put human beings first and dollars second,'” said Scott Wallace, co-chair of the Wallace Global Fund.

“This award in his honor is intended to recognize the type of extraordinary courage that ordinary people can summon to fight such abuses of power. No one represents such courage better than the Standing Rock Sioux Tribe. And never has such courage been more essential to the health of our democracy than right now.”

“We hold the Standing Rock community in high regard for their care for human and ecological well-being. By resisting the dysfunctional narrative imposed by the fossil-fuel industry, Standing Rock has demonstrated what it looks like to prioritize well-being over profit for the few,” said Scott Fitzmorris, co-chair of the Wallace Global Fund and great grandson of Henry A. Wallace.

Over the past year, the Standing Rock Sioux Tribe fought to protect its clean water, sacred lands and indigenous rights by resisting the Dakota Access Pipeline in a series of peaceful protests against Energy Transfer Partners’ plans to build the pipeline along a route violating Treaty law. The protests drew international attention and support—running from approximately April 2016 through February 2017, attracting thousands of people and resulting in hundreds of arrests and injuries. The Standing Rock Sioux tribe and its supporters who protested in solidarity stood their ground for higher principles at grave personal risk, igniting a movement.

President Trump’s executive order that gave the green light for the Dakota Access Pipeline was yet another transgression against Native Americans. Although oil began flowing through the Dakota Access Pipeline on June 1, 2017, the danger to the tribe’s water supply continues and the Standing Rock Sioux are not giving up the fight. They are pursuing legal action against the pipeline, while moving toward fossil fuel independence through expansion in renewable energy.

“This is not over. We continue to fight the pipeline in court and await a decision that adequately reflects the rule of law established in this country—one so often flouted by this administration. However, we will never stop fighting for our planet and future generations; this resiliency is part of who we are as a tribe,” said Archambault.

“We are grateful and honored to accept the inaugural Henry A. Wallace Award and a grant from the Wallace Global Fund that will help us continue our resistance against the pipeline and transition to clean energy technologies like wind and solar.”