How the Women of Standing Rock Are Building Sovereign Economies 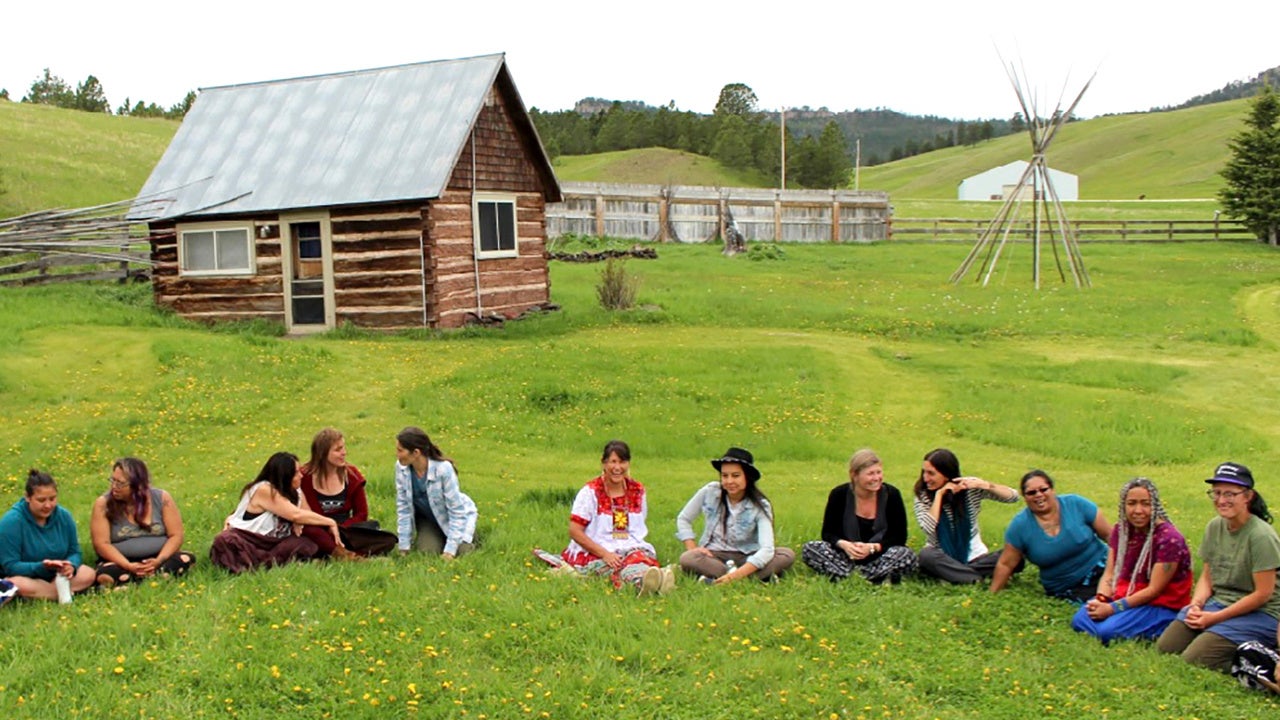 Water protectors of all persuasions gathered in talking circles at Borderland Ranch in Pe'Sla, the heart of the sacred Black Hills, during the first Sovereign Sisters Gathering. At the center are Cheryl Angel in red and white and on her left, Lyla June. Tracy Barnett

Sources reviewed this article for accuracy.

For Sicangu Lakota water protector Cheryl Angel, Standing Rock helped her define what she stands against: an economy rooted in extraction of resources and exploitation of people and planet. It wasn’t until she’d had some distance that the vision of what she stands for came into focus.

“Now I understand that sustainable sovereign economies are needed to replace the system we support with our purchasing power,” she said. “Our ancient teachings have all of those economies passed down in traditional families.” 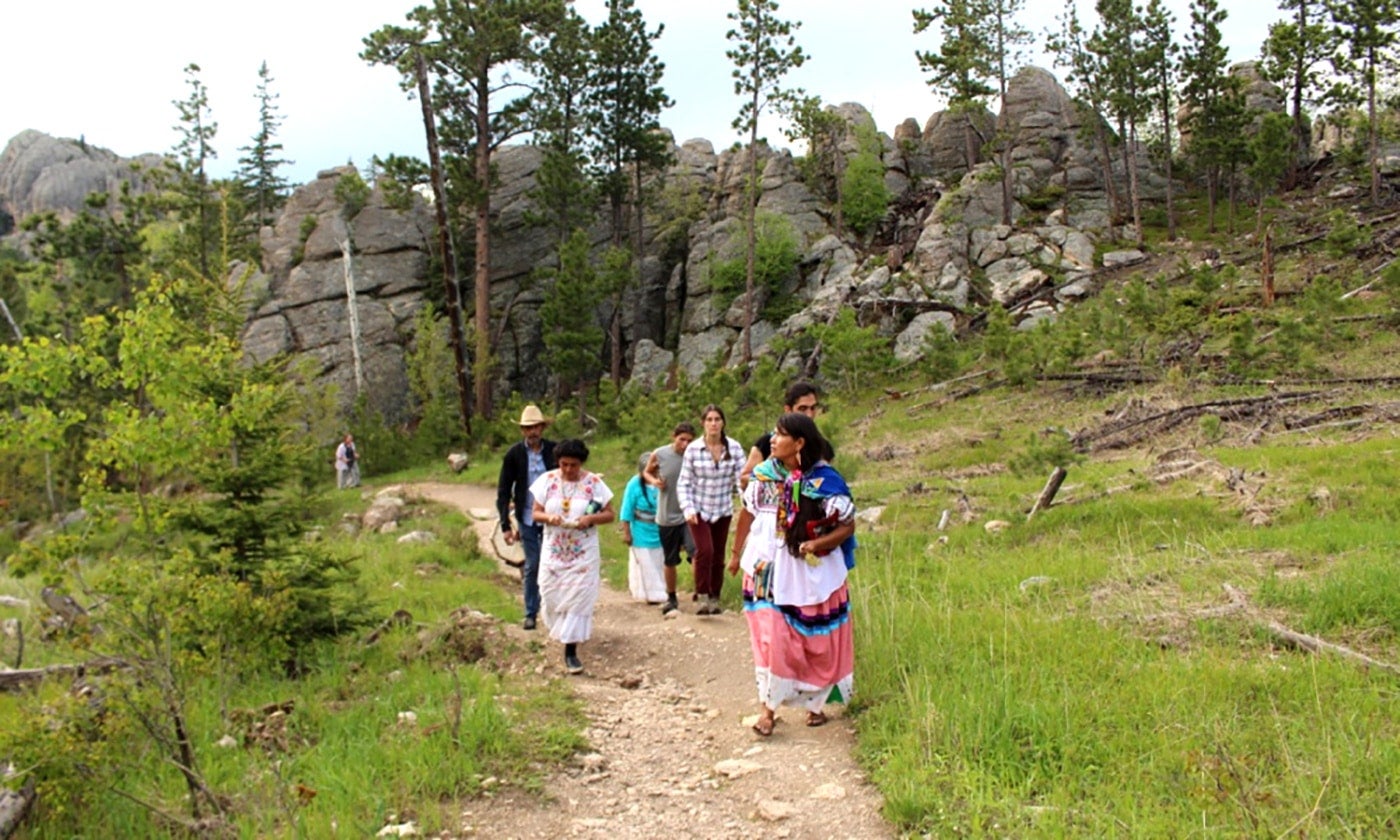 Cheryl Angel leads a group on pilgrimage at Black Elk Peak, one of four Lakota sacred sites that were visited during the Sovereign Sisters Gathering.

Together with other front-line leaders from Standing Rock, including Lakota historian LaDonna Brave Bull Allard and Diné artist and activist Lyla June (formerly Lyla June Johnston), Angel began acting on this vision in June at Borderland Ranch in Pe’Sla, the grasslands at the heart of the Black Hills in South Dakota. Nearly 100 Indigenous water protectors and non-Indigenous allies met there for one week to take steps to establish a sovereign economy.

The first annual Sovereign Sisters Gathering brought together women and their allies to talk about how to oppose the current industrialized economy and establish a new model, one in which Indigenous women reclaim and reassert their sovereignty over themselves, their food systems and their economies. 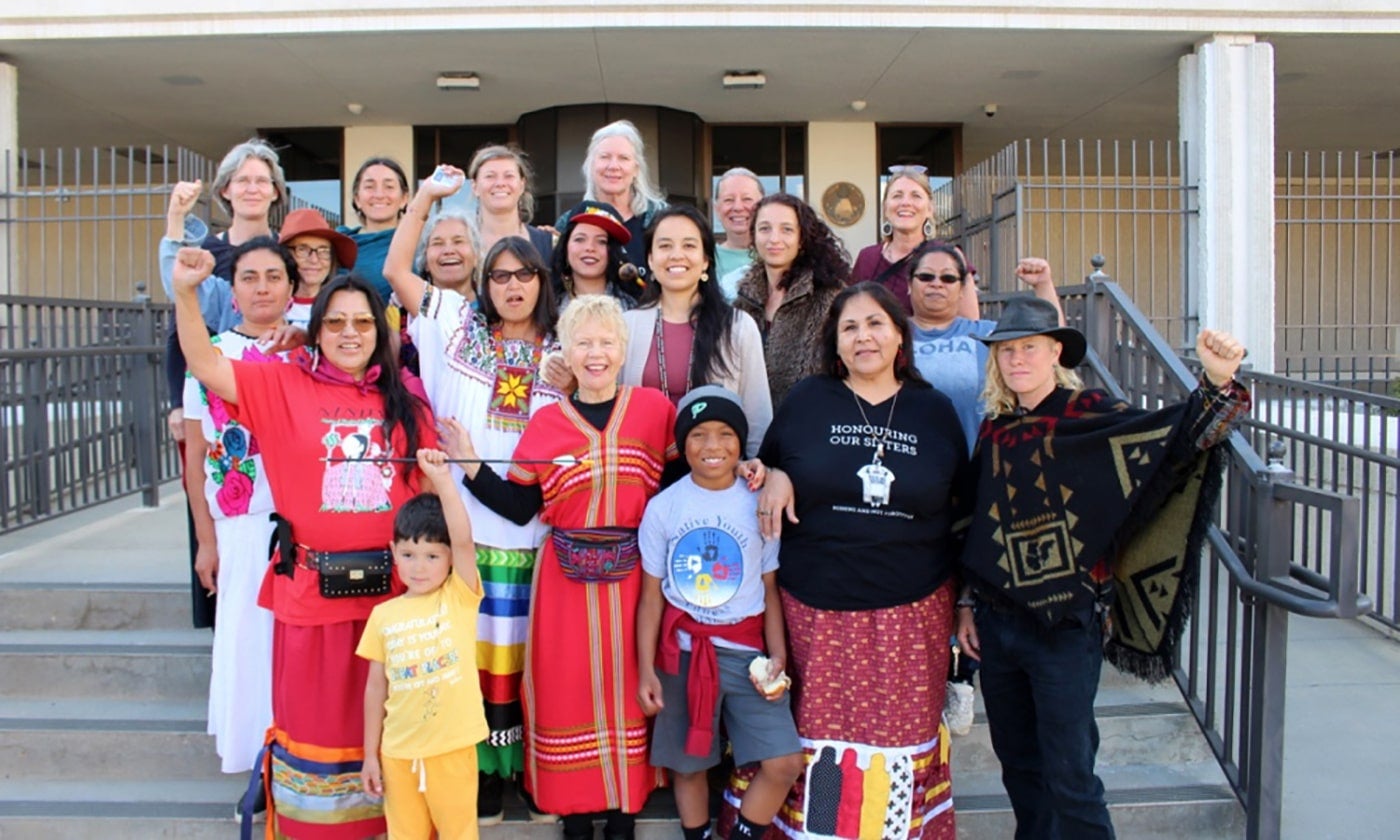 Sovereign Sisters drove to Rapid City, South Dakota during the gathering to join a protest and court hearing of the Riot Booster Act, a bill introduced by Governor Kristi Noem aimed at criminalizing pipeline protestors.

Allard, June and Angel shared a bit about the work they’ve been doing to establish sovereignty, each in her own way, since the Standing Rock encampments.

As the woman who established the first water protector encampment at Standing Rock — called Sacred Stone Camp —and issued a call for support that launched a movement, Allard learned a lot about sovereignty and empowerment during the battle against the Dakota Access pipeline.

As the camps began to dismantle in the last weeks of the uprising, she frequently fielded the question: “What do we do now?” 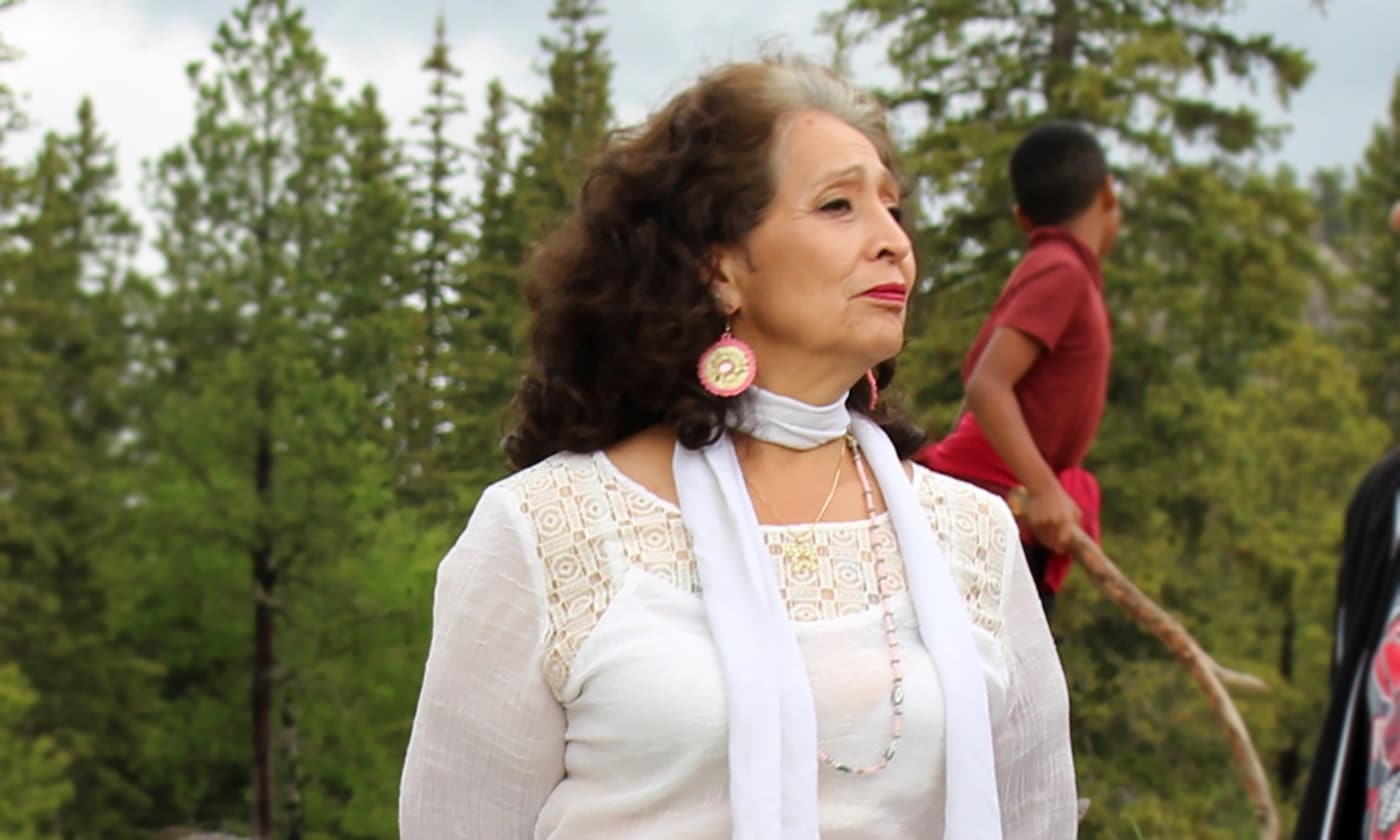 Planting seeds is what Allard has been doing since the Standing Rock encampment, as she’s worked with her neighbors and with those who stayed on at Sacred Stone Camp toward a vision of a sustainable community.

These days, self-care is more important than ever, she said, with the accelerating climate crisis, something that Native people are acutely aware of and have seen coming for a long time. “We’re not worrying — we’re preparing,” she said.

Sacred Stone Village has installed four microgrids of solar power and have two mobile solar trailers used to connect dwelling areas that can also be taken on the road for trainings, and the neighboring town of Cannon Ball has opened a whole solar farm. They’ve been planting fruit trees and growing gardens, fattening the chickens, stockpiling firewood. And in some ways, life on the reservation is already a preparation in itself.

“On the Standing Rock reservation, as you know, we are below poverty level, and many of the people live by trade and barter. A lot of people live in homes without electricity and running water. We burn wood to heat our homes,” Allard said. “What I find in the large cities is people who don’t know how to live. And their environment — if you took away the electricity and the oil, what would they do? We already know how to live without those things.”

Lyla June: The Forest as Farm

A Diné/Cheyenne/European American musician, scholar and activist, June has gravitated toward a focus on food sovereignty through her work to revitalize traditional food systems. Currently, she’s in a doctoral program in traditional food systems and language at the University of Alaska, where she works with Indigenous elders around the country to uncover the genius of the continent’s original cultivators.

“I think there’s a huge mythology that Native people here were simpletons, they were primitive, half-naked nomads running around the forest, eating hand to mouth whatever they could find,” she said. “That’s how Europe portrays us. And it’s portrayed us that way for so many centuries that even we start to believe that that’s who we were. 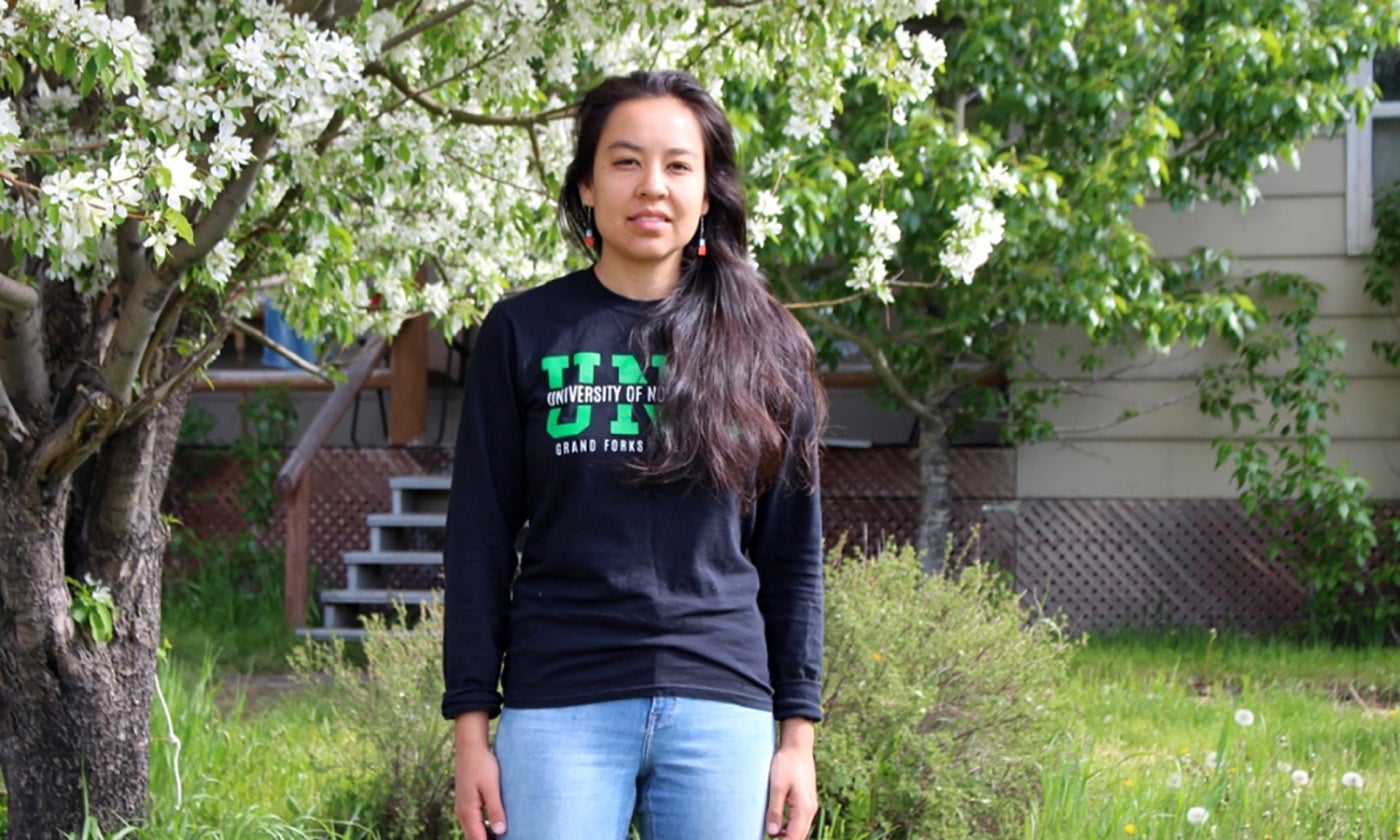 Musician, public speaker, and scholar Lyla June on recovering traditional food systems: “What we’re finding… is that human beings are meant to be a keystone species… what [we’re] trying to do is bring the human being back into the role of keystone species, where our presence on the land nourishes the land.”

June is intrigued by soil core samples that delve thousands of years into the past; analysis of fossilized pollen, charcoal traces and soil composition reveals much about land use practices through the ages. For example, in Kentucky, a soil core sample that went back 10,000 years shows that about 3,000 years ago the forest was dominated by cedar and hemlock. But about 3,000 years ago the whole forest composition changed to black walnut, hickory nut, chestnut and acorn; edible species such as goosefoot and sumpweed began to flourish.

“So these people—whoever moved in around 3,000 years ago — radically changed the way the land looked and tasted,” she said.

So did the colonizers, but in a much different way. The costs to the food system as a result of colonization, she said, is becoming clear, and the mounting pressure of the climate crisis is making a shift imperative.

“When did we start waiting for others to feed us? That’s no longer going to be a luxury question,” June said.

Besides the vulnerability of monocrops to extreme weather events, these industrial agricultural crops are also dependent on pesticides and herbicides. Additionally, pests are adapting, producing chemical resistant insects and superweeds.

“We’re running out of bullets in our food system, and it’s quite precarious right now,” she said. “The poor animals that we farm are also on the precipice … so we’re in a state where we should probably start asking ourselves that question now, before we’re forced to, and remember the joy of feeding ourselves.”

That’s June’s intention: to take what she’s learned from a year of apprenticeships with Indigenous elders in different bioregions, then return home to Diné Bikéyah — Navajo territory — to apply it, regenerating traditional Navajo food systems in an interactive action research project aimed at both teaching and learning, refining techniques with each year.

“I’m hoping at the end of three years, or four years, we will be fluent in our language and in our food system,” June said. “And we will be operating as a team — and we will have a success story that other tribes can look to and model and be inspired by.”

The long-range goal, she said, is to create an autonomous school that teaches traditional culture, language and food systems that can be a model for other Indigenous communities.

To Angel, sovereignty is best expressed in creating community — the temporary communities created at gatherings, like at the Sovereign Sisters Gathering, but also more permanent communities, like at Sacred Stone Village.

Part of being sovereign lies in strengthening and rebuilding sharing economies, she said. And part of it lies in reducing waste, rejecting rampant consumerism and the harmful aspects of the modern industrial system, like single-use plastics and toxic chemicals. 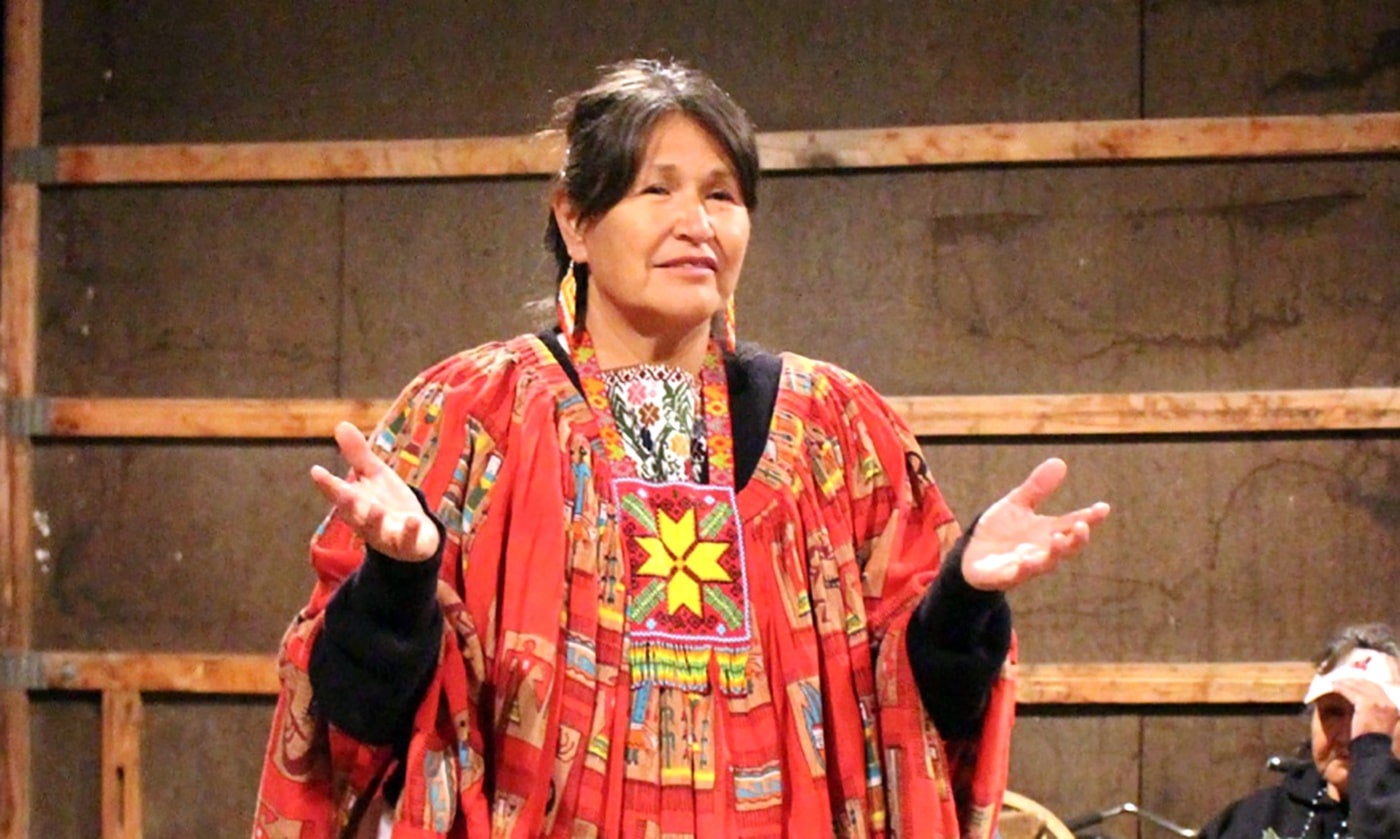 Cheryl Angel in a late-night talking circle, sharing reflections about her Lakota ancestors: “We were never into entitlement; that’s why we didn’t have kings. We were into revering, honoring, relating to everything around us. All of these living spirits around us… That’s the system nobody is talking about, that needs to be protected.”

Despite the money the pipeline company spent to repress the uprising, she said, water protectors around the world stepped up and pitched in to create an alternate economy at Standing Rock, and millions were raised to support the resistance.

“We could do that again. We can gift our economies between each other. We’re doing it right here,” Angel told the women assembled in the Black Hills — women who were gardeners and builders, craftswomen and cooks, healers and lawyers, filmmakers and writers — and, above all, water protectors. “These few days we’ve been here prove to me and should prove to you that we have the skills to create communities without violence, without drugs, without alcohol, without patriarchy — just with the intent to live in peace.”

Tracy L. Barnett wrote this article for YES! Magazine. Tracy is a freelance writer based in Mexico and the founder of The Esperanza Project. Interviews with Cheryl, LaDonna and Lyla June are featured in the magazine’s Women of Standing Rock series.