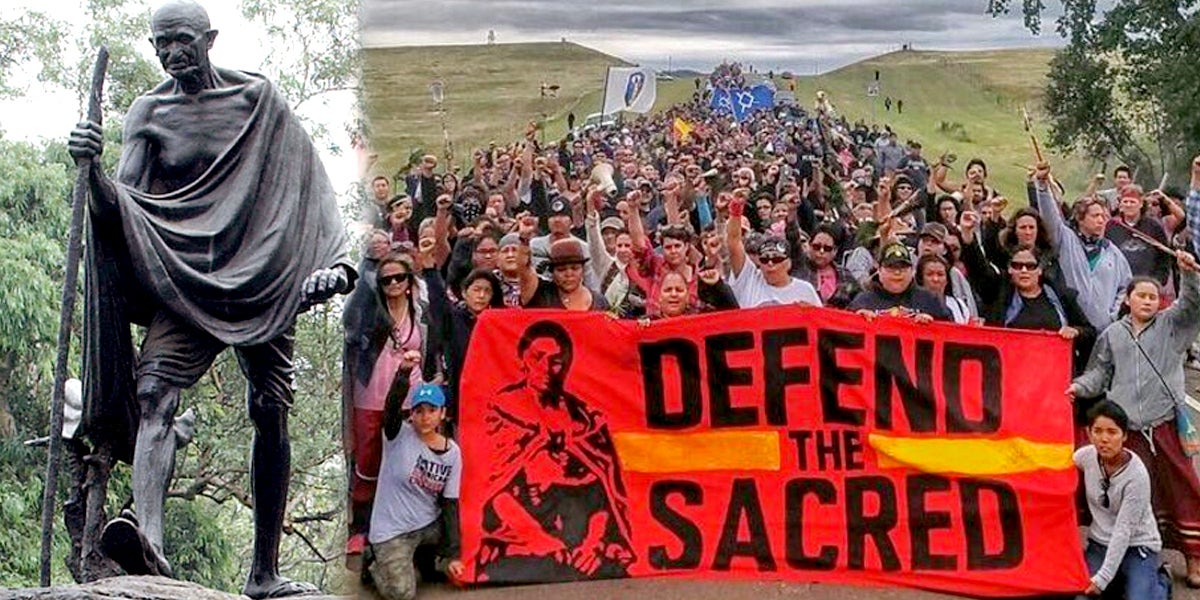 Today was supposed to be the deadline for thousands of protesters encamped to prevent completion of the Dakota Access Pipeline across Lake Oahe on the Missouri River to evacuate their camp-sites. Instead it has become a moment of celebration, as the Army Corps of Engineers and the Obama Administration have concluded that a new Environmental Impact Statement is needed to determine the best route across the Missouri River. But the incoming Trump Administration is likely to reverse the decision, with uncertain legal results for the environmental assessment process.

This is what victory looks like for #NoDAPL activists.

The resistance by the Standing Rock Sioux nation and its allies to the proposed Dakota Access Pipeline routing signaled a new stage in evolving community resistance to fossil fuel extraction and transportation—but also reveals some ugly fissures within America as we enter a four year, almost certainly traumatic presidency.

Standing Rock has been the largest and one of the longest, Native American resistance protests in modern America. It differs from earlier fossil fuel protests like those against Keystone XL or Shell’s basing Arctic drilling vessels in the Port of Seattle because the protesters attempted to physically disrupt the construction, not just symbolically protest it.

They have succeeded, for the moment. Months ago construction slowed, Corps of Engineers permits were suspended and the President had already called for consideration of alternative routes. Native American vetoes of fossil fuel projects had become an acknowledged part of the regulatory and permitting landscape in Canada, but only recently have the tribes inserted themselves routinely into these processes in the U.S. They have some won victories already, as when the U.S. Army Corps of Engineers denied the permit for a coal and oil export terminal at Cherry Point, Washington, saying the project would impair fishing grounds guaranteed to the Lummi Nation by treaty.

The backstory of the project is particularly outrageous; alternative routings that would have avoided the Standing Rock issues altogether appear to have been rejected by the Army Corps and the developer, Energy Transfer Partners, because they might threaten water supplies for Bismark, North Dakota—a conscious decision to put an Indian nation at risk to protect a non-Indian community. Energy Transfer Partners appears to have tried to cover up evidence that the construction was disrupting sacred sites and actually faces fines from North Dakota as a result. And both the state and Energy Transfer have persistently treated the Standing Rock Sioux as one among many stakeholders who should be expected to participate in the regulatory process designed by North Dakota, rather than as a sovereign nation whose rights were, at the very least, in dispute and needed to be negotiated.

Indian advocates point to Standing Rock as evidence of a broad consciousness among Native Americans of the need to see the fight against fossil fuel development as continental. By September, more than 300 tribes had gathered at the protest camp, at the confluence of the Cannonball and Missouri Rivers, along with numerous non-Indian supporters like a contingent of Catholic workers.

Standing Rock organizers cite the evolution in Canada of a multi-First Nation alliance to resist any and all projects that would increase production of oil from the Albert tar sands. The first version of this treaty was signed in 2013; the latest, signed last September, and has now grown to link 112 Canadian and Northern U.S. tribes in a united front to oppose all pipelines or other infrastructure which might facilitate increased tar sands production.

(Their opposition is critical because Canada’s Prime Minister, Justin Trudeau, last week approved two pipeline expansions serving the tar sands, expansions which would enable an additional 900,000 barrels of oil a date to reach U.S. and world markets, significantly increasing the likely price tar sands producers can get for their product, and the amount of it they can pump. But the First Nations will continue the fight).

In response to the Standing Rock ongoing protests, the New York Times intensified its coverage of the resistance, including the first of two full throated editorials calling for the pipeline to be rerouted. Then, on the night Nov. 20, police surrounding the protesters escalated their tactics and crossed the line into brutal crowd suppression. In the words of a second The Times editorial denouncing the actions, “They drenched protesters with water cannons on a frigid night, with temperatures in the 20s. According to protesters and news accounts, the officers also fired rubber bullets, pepper spray, concussion grenades and tear gas. More than 160 people were reportedly injured, with one protester’s arm damaged so badly she might lose it.”

By the standards of historic violence against Native Americans, this is small bore stuff—nothing like Wounded Knee for example. But it has been some time since peaceful protesters in the U.S. were met with such violence. A recently established norm—that Americans may disruptively protest as long as they are peaceful without fearing police violence—broke down.

After the brutal events of Nov. 20, the first instinct of the Corps and the State were to intensify the crack-down. The Corps declared that it would shut down the camp-site where most of the protesters have been housed and that any who remained would be subject to arrest for trespass. (This was stunningly tone deaf after the events in Eastern Oregon where right-wing ranchers armed with guns and openly threatening violence were permitted to occupy a federal wildlife refuge which also was the home to important sacred sites without being arrested for months). The state of North Dakota followed up by ordering the protesters evicted because their dwellings were not adequately winter-proofed.

Both the Army Corps and North Dakota backed off slightly in the days following, the Corps making clear it would not forcibly evict protesters even if they were trespassing, and the state clarifying that it’s “blockade” of food and other supplies would be enforced with a threat of fines, not by actually physically obstructing access. Two thousand U.S. veterans organized as Veterans Stand for Standing Rock, agreed to serve as human shields for the protesters to avoid the kind of violence that flared up on Nov. 20. Then came Sunday’s stunning announcement.

In some ways Standing Rock is a Native American version of Gandhi’s 1930 Salt March—and while the Trump Administration is likely to try to ram through the permits needed to complete Dakota Access, it’s similar efforts to revive Keystone XL are triggering vociferous opposition from Nebraska ranchers, unlikely partners with the Sioux, but symbolic of a new and emerging coalition. And Gandhi did not succeed in undoing the Salt Taxes—his game was much bigger, intensifying Indian resistance to British rule. Standing Rock, even if the pipeline gets built, seems likely to have had that impact across a wide swathe of Indian Country in the U.S.