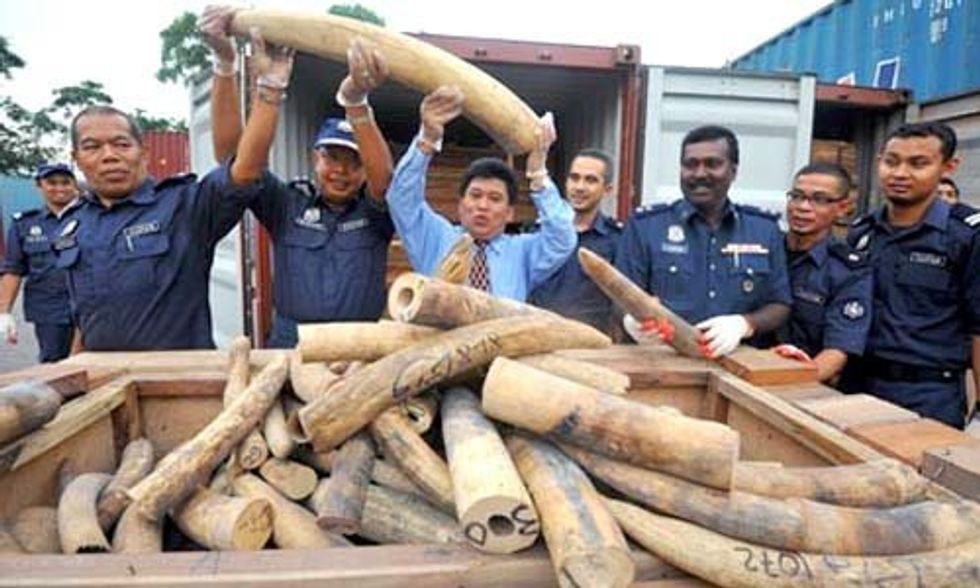 Sri Lanka became the fifteenth country today to crush and burn its ivory stockpile and the first to formally apologize for its role in the illegal ivory trade.

“We have to apologize,” the Venerable Omalpe Sobitha Thero, the Buddhist priest who led the service, told National Geographic. “Those elephants were victimized by the cruelty of certain people. But all of human society is responsible. We destroyed those innocent lives to take those tusks. We have to ask for pardon from them.”

The ivory, comprised of 359 tusks and weighing 1.5 tons, is the country's entire stockpile. Worth an estimated $3 million, the tusks were seized by customs authorities in May 2012 en route from Kenya to Dubai. However, DNA testing revealed that the tusks came from Tanzania.

The tusks were originally going to be donated to the Sri Dalada Maligawa Buddhist Temple, but the government changed its plans amid public outcry. According to National Geographic, critics of the plan feared the tusks would re-enter the black market and that by handing them over to a third party, the government would violate the Convention on International Trade in Endangered Species of Wild Fauna and Flora (CITES), the body that regulates the global wildlife trade.

I would like to express my most sincere thanks to H.E. President Maithripala Sirisena for inviting me to witness the destruction of 359 pieces of confiscated African elephant ivory weighing 1,529 kilograms here in Colombo today.

Over the past 24 months we have seen countries within Africa, East and South East Asia, Europe, the Middle East and North America destroy stockpiles of illegally traded elephant ivory that has been seized and confiscated.

Today’s event is the first destruction of confiscated ivory in South Asia and it is the first time that such an event has included a religious ceremony to honor the elephants that were killed, which makes it a truly unique and remarkable event.

The Venerable Omalpe Sobitha Thero performed a transfer of merits, "a Buddhist ritual often done for departed relatives to honor them and help them reach a better place in their next life," National Geographic explained.

“Buddhism and other religions don’t tolerate killing and cruelty to elephants,” Minister Perera said. “We believe in rebirth, even of elephants or household pets. It’s traditional to conduct religious rights for dead humans as well as animals."