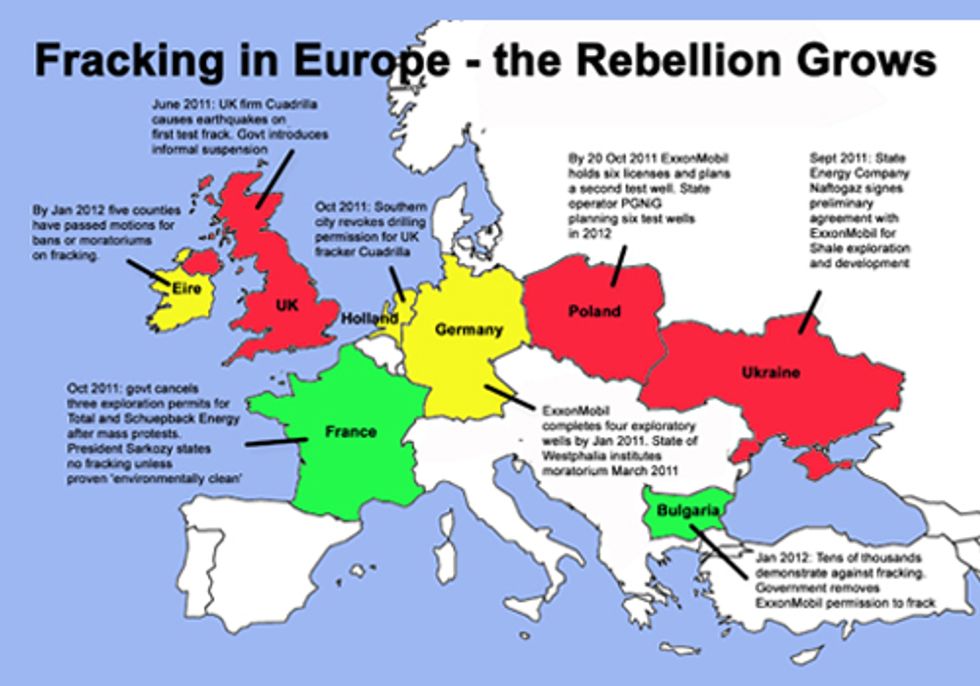 Recent media reports from Poland show that heavy-handed tactics such as spying and undercover operations are being used against groups and individuals who question shale gas development. Shale gas companies have sent spies to anti-fracking meetings and reported their findings to the highest levels of the Polish government and internal security services, according to reports in a Polish daily newspaper.

Food & Water Europe today urged Polish Members of the European Parliament who are active in the policy debates on shale gas in Brussels to distance themselves from such tactics and to acknowledge that the work of environmentalists and local groups are based on legitimate environmental and economic concerns about the impacts of fracking.

“Food & Water Europe strongly believes that citizens should be able to engage in an open debate about a whole range of issues, including and especially in discussions on energy policy,” said Wenonah Hauter, executive director of Food & Water Watch. “Decisions on a country’s energy mix have all too often been taken behind closed doors and only after consulting a limited number of actors, such as utility and fossil fuel companies. Decisions on energy policy and shale gas in particular will have long-lasting effects for Poland and the EU. A thorough debate is needed and that can only happen if all voices are heard.”

On Oct. 4, the daily newspaper Gazeta Prawna reported that one of the shale gas investors had sent spies into local communities that have expressed concerns about the environmental impact of fracking. Gazeta Prawna was able to access a government document, which stated the following: "The Ministry of Foreign Affairs received from one of the energy companies, engaged in exploration of shale gas, a copy of the record of a discussion among anti-shale associations (...) the content of the enclosed information indicates a significant radicalization of positions of NGOs in relation to shale gas.” The press office of the Ministry confirmed that the public safety authorities received such as document due to the alleged intention of anti-fracking groups “to breach public security and order.”

So far, energy companies as well as the Polish government have offered their own positive ‘spin’ on the supposed benefits of large-scale unconventional gas and have consistently downplayed the risks involved. “In view of this manifest bias in the Polish ‘debate’, local communities increasingly find that their concerns about the environmental and health impacts of shale gas activities are not taken seriously,” said Hauter. “This lack of an independent, science-based assessment of risks involved in shale gas in Poland is the reason why numerous local associations there are not welcoming this industry with open arms.”

In addition, Polish citizens now also have to fear violations of their fundamental right “to receive and impart information and ideas without interference by public authority,” as guaranteed by Article 10 of the European Convention on Human Rights. Food & Water Europe is concerned that the Polish government perceives critical questions from civil society about shale gas as an attempt “to breach public security and order.”

This belief in the benefits of an open debate has led Food & Water Europe—in cooperation with the Polish Boell Foundation—to organize a conference to discuss with the Polish public and media the negative impacts and the risks involved in developing shale gas resources on a large scale. The conference is entitled Naiveté or rationality? Understanding the risks and impacts of fracking in Poland and will take place in the afternoon of Oct.22.