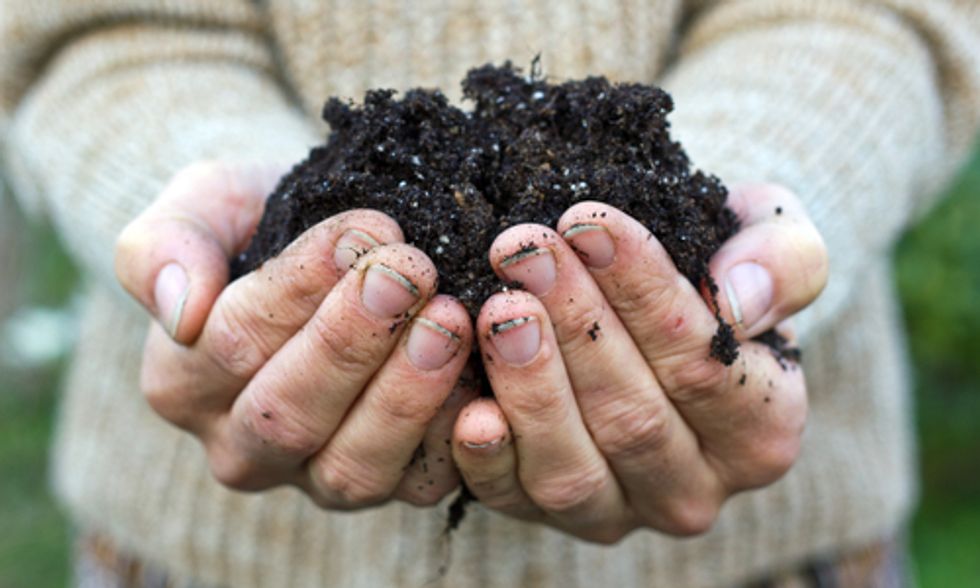 We’ve come to believe that the oh-so-common planting directive “as soon as the soil can be worked” is almost meaningless. Workable soil is important to planting but other conditions—including amendment additions, pH conditions and soil temperature—have to be considered as well. Your friendly and eager Planet Natural blogger has often advised patience when it comes to spring planting. On the other hand, there’s plenty to be done before the point of workable soil—in other words, when it’s safe to stick seeds in the ground—is reached. And that work can help make your soil workable sooner.

Sure some of our friends in warmer climes have already “got their gardens in,” as my grandfather used to say. But many of us are still waiting (forecast for Saturday night here in our hometown of Bozeman, MT is for snow). Maybe we’ve put in a row of peas along the northern border (with its southern exposure) knowing that the peas we’ll plant in a week or two will probably catch up. Still, planting time is right around the corner, even here in the norther tier states and when that hits we want to be ready. And there’s plenty to do around the garden ahead of spring planting that will facilitate garden sowing and (maybe, weather depending) even help bring that time on sooner.

First, we’ll take a sunny day—or maybe one when it isn’t raining or spewing what the weatherman call a “wintery mix”–and pull back the protective mulch we spread last fall. This of course helps the garden soil give up the moisture its collected and gets it to workable condition. Our mulch is usually a mix of fall leaves we chopped with the mower after raking and whatever else was available: left-over straw that we’d used to mulch between rows, grass collected after fall mowings, goat pen cleanings, chicken coop cleanings (seems everybody’s raising chickens these days) that wonderful mix of trampled straw and manure that we get from our friends’ goat operation.

If the forecast calls for rain or snow, we leave the mulch right where it is.

It’s easy to suggest that any straw or hay you use in the garden be seed-free to prevent weeds. It’s another thing to actually obtain it; in our experience it just doesn’t exist. But leaving your ground uncovered for a few nice days gives the seed a chance to germinate. When you actually do start to work your garden soil, the weed seedlings get turned into the ground.

Often, we’ve already pulled mulch away from some of the vegetables we hoped would over-winter in the garden. Chard is one of our favorites for this, spinach also works. Beets will overwinter well and put up greens at the first chance they get. But as they do, their roots soften. Unless you get them early, stick to the greens. Carrots? You won’t eat their tops (though we know people who use carrot tops to make broths and soups) and once the roots start putting out those little threads, they’re not much worth eating. But those second year carrot tops that do grow up, if left in place, will eventually give you a chance to collect your own carrot seed.

What we pull off the garden bed usually goes right into our still slumbering compost heaps. This is a good time to turn those heaps, though they’re often heavy with spring moisture and difficult to fork up. Do the best you can (or get a compost tumbler). Those dried leaves and straw qualify as brown material. To give your compost the right balance you’ll want to add green material, something that’s often in short supply this time of year. Kitchen scraps are a good idea although most kitchens don’t generate enough scraps to get a proper balance. We like to add alfalfa pellets and, just to kick start the process, a bucket of  unfinished manure in the form of pig muck we dug up  from another friend’s organic, heritage hog operation. Not lucky enough to live by a pig farm? (Can’t believe I just wrote that.) A bag of organic steer or chicken manure will also do the trick.

The longer the spring season stays wet and cool, the more likely we are to solarize our garden bed. Solarizing soil by covering it with plastic tarps, is often employed during the heat of summer to kill unwanted pests, disease and fungi in the earth. Doing it in the spring probably won’t accomplish this. It just doesn’t get warm enough. But it will protect your soil  from rains—make sure you set it up to allow for drainage—and increase soil temperatures that will speed germination once your seeds go in.

So how do you know your soil is ready to be worked? The tried-and-true method is the squeeze test. Grab a fistful of garden dirt and squeeze. If it easily forms a ball that doesn’t crumble, it’s not ready. But if it breaks down into granules as you squeeze (because there isn’t enough moisture to allow it to clump) then it’s ready. Of course, there’s some variations to this. If your soil is heavy in clay, it will clump more easily. Don’t be afraid to get in there and do what needs to be done to improve it.

If you plan on spreading manure in your garden ahead of planting, now’s the time to do it. Getting it on the ground ahead of planting will give it time to decompose, making it more available to your plants. Be careful how much you use and where. Lettuce and other greens won’t germinate well in soil that’s high in nitrogen. We always prefer composting any manure that might come our way before putting it into the garden.

Of course, the most important rule is not to get into your garden before the soil is friable. Bringing in the rototiller or walking around as you turn soil over with a spading fork will just compact the soil even if it’s not apparent at the surface. Trying to break up compacted garden soil can be a frustrating task. What your fork turns over comes up as clods that will harden and be even more difficult to break up. Wait, wait, wait until your soil is ready to be worked. While you’re waiting is a good time to test your soil for its pH and nutrient readings. Then, when its ready for you, it’s time to make adjustments.

When it’s ready to be worked amend your soil with as much finished compost as you’ve got (see When is Compost Finished?). Now you’re really ready to grow.

How to Use Cold Frames As a Year-Round Gardening Tool