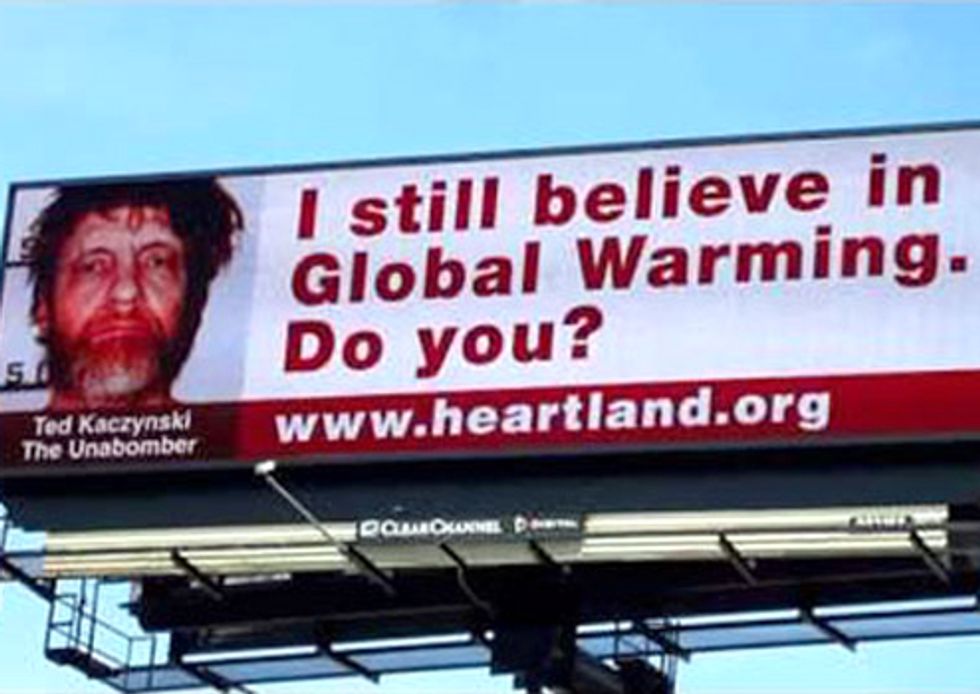 Last Friday, the long-standing climate denier think tank, the Heartland Institute ran an advert featuring the Unabomber on a billboard in Chicago that read: “I still believe in Global Warming? Do you?”

The Unabomber advert was going to be followed by images of  Fidel Castro, Osama Bin Laden and hostage-taker James J. Lee. According to Heartland, those who accept the science of climate change are essentially “murderers, tyrants, and madmen."

"What these murderers and madmen have said differs very little from what spokespersons for the United Nations, journalists for the ‘mainstream’ media, and liberal politicians say about global warming,” adding that “the people who still believe in man-made global warming are mostly on the radical fringe of society.”

So much critical analysis and great rebuttals have been written about this latest ridiculous attack on climate science that it’s difficult to know where to start.

It’s another deliberate attempt by the Heartland to distort the debate on climate change, which was widely criticised. Jamie Henn from 350.org said, “This is what desperation looks like. Comparing 97 percent of the world’s scientists, the pope and the president—all of whom believe in climate change—to mass murderers is a bit unhinged, to put it lightly.”

Such was the storm of controversy and criticism that Heartland pulled the advert arguing that the “billboard was always intended to be an experiment."  That was another lie. If they had thought they would have got away with it, they would have run another one.

Before we are too shocked though, we should realise there is nothing new here to Heartland’s tactics. Indeed, Steve Zwick in Forbes magazine argues that “Far from being an aberration, this is just the latest in a long string of embarrassing acts that Heartland has carried out in public—and they’ve been at this for more than 25 years. Before they got into the anti-climate-science racket, they were in the anti-lung-science racket, where they helped the tobacco industry assuage our concerns over second-hand smoke.”

So if you haven’t signed the petition from Forecast the Facts asking for other funders to pull out, click here.

They join General Motors and AT&T that have recently ended their funding from Heartland.

Even some of the sceptics were dismayed. Ross McKitrick said in an a strongly-worded letter to Heartland: “I am absolutely dismayed. This kind of fallacious, juvenile and inflammatory rhetoric does nothing to enhance your reputation. You cannot simultaneously say that you want to promote a debate while equating the other side to terrorists and mass murderers.”

GOP climate denialist, James Sensenbrenner, also said he would not speak if the adverts continued. Donna Laframboise, a fellow Canadian sceptic has even pulled out arguing “Forget disappointment. In my view, my reputation has been harmed. And the Heartland thinks it has nothing to apologize for.”

But what it is also doing is making it more likely that physical violence will be used against climate scientists as it tries to make the debate around climate change even more toxic. As Howard Halpern, the president of the American Academy of Psychotherapists once wrote:

“Social psychologists and demagogues have long known that if ordinary citizens are to be provoked to violent actions against individuals or groups or fellow scientists, it is necessary to sever the emphatic bond with those to be attacked by painting them as different and despicable.

“We are unlikely to harm a friendly neighbour because she has strong views about equal rights for women, but if we call her a “femi-Nazi” she becomes “the other”—evil, dangerous, hated. We are unlikely to harm the couple down the block who are active on behalf of protecting endangered species, but if we call them ‘environmentalist wackos’ they become ‘the other’—weirdos who must be vilified and suppressed as enemies to ‘normal’ Americans. When our shared humanity with those whom we disagree is stripped away, it becomes acceptable to blow them up."

Other climate sceptics are effectively condoning the adverts by continuing to agree to co-sponsor or speak at Heartland’s annual sceptic-get together.

The Competitive Enterprise Institute and Reason Foundation, other leading denial organisations, are not withdrawing as co-sponsors. Vice President of Reason is Julian Morris from the London Based International Policy Network, who will be speaking at the conference, said that an “open debate and the exchange of ideas are vital to a free society."

How these adverts can been seen as contributing to an open debate on climate change is anyone’s guess.

The renowned climate sceptic MEP, Roger Helmer, who has moved so far to the political right he has left the Conservatives and now represents the UK Independence Party, will also be speaking at the conference and argues that “I am delighted that the Heartland campaign for the Chicago climate conference has succeeded in its purpose."

Maybe Helmer would be less delighted if the purpose of the adverts was to make the debate on climate change so toxic against leading climate scientists, that violence became more likely...