Sparks Fly in Most Explosive Democratic Debate Yet 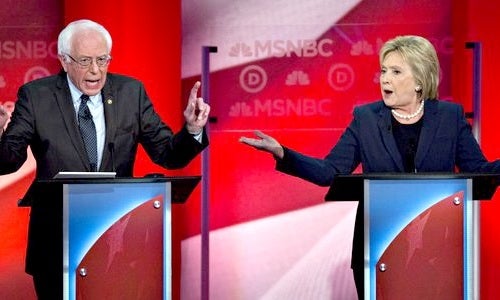 In their most testy and substantive debate yet, Hillary Clinton and Bernie Sanders argued Thursday night over the heart of Sanders’ critique of her candidacy—that you cannot be a progressive reformer if you’re too close to the wealthiest Americans.

“I think it’s time to end the very artful smear that you and your campaign have been carrying out,” Clinton said, drawing boos from the New Hampshire crowd.

It was the most intense #DemDebate so far… but who won? https://t.co/YQU1zlBnlO pic.twitter.com/A4og4mRQWW

“You know, there is a reason why these people are putting huge amounts of money into our political system,” he replied moments later. “And in my view, it is undermining American democracy and it is allowing Congress to represent wealthy campaign contributors and not the working families of this country.”

The last debate before Tuesday’s New Hampshire’s primary was filled with barbs and sparks. Sanders is leading in polls by an average of nearly 20 percent, putting pressure on Clinton to close that gap if she cannot win. She presented many forceful but poised lines of attack, injecting details suggesting she knows better than Sanders how to get government to work. He did not respond with personal attacks, but repeatedly said the problems were deeper and solutions broader than she was offering.

Clinton’s opening remarks chided Sanders for taking too narrow a view of the inequality in America, saying it wasn’t just a rigged economy and a corrupt political system, but also “the continuing challenges of racism, of sexism, of discrimination against the LGBT community, of the way that we treat people as opposed to how we want to be treated … and I’m not making promises that I cannot keep.”

From that moment on, with some exceptions, what unfolded was a feisty display of how they really think differently about problems and solutions. Clinton was immediately asked about her comments to a New Hampshire newspaper that many of Sanders’ ideas were not achievable, like creating a Medicare-for-all healthcare system. “I’ve been fighting for universal healthcare for many years and we’re now on the path to achieving it,” she said. “I don’t want us to start over again.”

“Here is the issue,” Sanders countered in a typical reply. “Every major country on Earth, whether it’s the UK, whether it’s France, whether it’s Canada, has managed to provide healthcare to all people as a right and they are spending significantly less per capita on health care than we are. So I do not accept the belief that the United States of America can’t do that.” He said that was also true of cutting prescription drug costs, making public colleges and universities tuition-free and building on Obamacare to evolve into a Medicare-for-all system. “I do believe that in the future, not by dismantling what we have here—I helped write that bill [Obamacare]—but by moving forward, rallying the American people, I do believe we should have health care for all,” he said.

When MSNBC’s moderators asked Clinton if some of her past stances such as voting as a senator for the invasion of Iraq or being pro-death penalty in some cases or not taking positions on global trade deals or the Keystone XL pipeline showed she was “too far to the right,” she doubled down with portraying herself as a progressive.

When Sanders turn came, he said that his to-do list was neither unrealistic nor radical. But the way he presented it showed that his frame for the problems and solutions was that of an outsider who’s been watching the wheels of power, money and influence grind for years—and he was not content to gloss real obstacles to change.