Sparks Fly Between Clinton and Sanders During Dem Debate 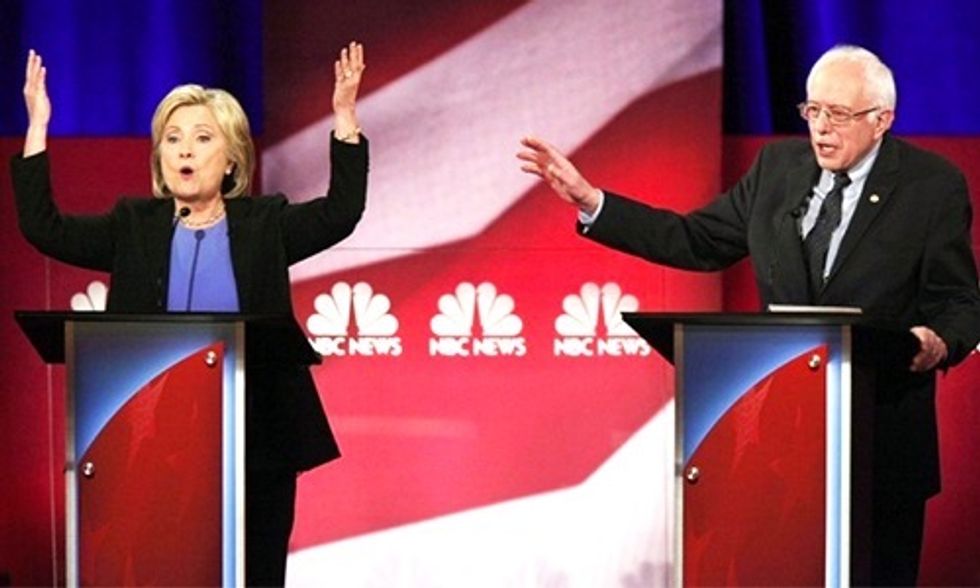 Bernie Sanders and Hillary Clinton sparred over gun control, Obamacare, taxes, Wall Street reform and their vision of how far government should go to help Americans in their final debate before 2016’s voting starts in Iowa.

Their responses—with Sanders emphasizing bigger themes and systemic corruption that must be challenged and Clinton emphasizing progress comes from pushing the existing system toward better results—showed why they are virtually tied in the opening states that will caucus and cast ballots for the Democratic Party’s nominee.

The debate also featured Martin O’Malley, who lags far behind the pair but attacked Clinton for pandering to African-Americans by siding with Barack Obama to minimize her Wall Street ties—saying she stood by the president’s achievements—at a debate sponsored by the Congressional Black Caucus Institute in Charleston, South Carolina.

“Now you bring up President Obama here in South Carolina in defense of the fact of your cozy relationship with Wall Street,” he said. “In an earlier debate, I heard you bring up even the 9/11 victims to defend it.”

But the real action and tension on Sunday night was between Sanders and Clinton. The debate was the first held in the South, where polls have repeatedly found that Clinton has a lead among African-Americans. That fact was reenforced by their opening statements where they both spoke of personal ties to Dr. Martin Luther King, Jr. and his quest for racial and economic justice.

“I … remember that he spent the last day of his life in Memphis, fighting for dignity and higher pay for working people,” Clinton said.

“This campaign is about a political revolution to not only elect a president, but to transform this country,” Sanders said.

The sparring started when the debate moderator asked Sanders about Clinton's attack last week that called him “a pretty reliable vote for the gun lobby.”

“Well, I think Secretary Clinton knows that what she says is very disingenuous. I have a D-minus voting record from the NRA,” he replied, reciting where he’s opposed military-style weapons, supported background checks and President Obama’s recent executive actions to expand and enhance gun control enforcement. “We have seen in this city a horrendous tragedy of a crazed person praying with people and then coming up and shooting nine people. This should not be a political issue.”

When her turn came, Clinton replied that Sanders “has voted with the NRA, with the gun lobby numerous times. He voted against the Brady Bill five times. He voted for what we call the Charleston loophole. He voted for immunity for gun manufacturers … Let’s not forget what this is about, 90 people a day die from gun violence in this country.”

Sanders did not respond further after Clinton’s remarks, but he did say earlier that he would reconsider the law granting immunity to gun makers—even though it had provisions outlawing some ammunition that the police wanted. He also said that coming from a rural state with few gun controls that he could bridge the gap between sportsmen and gun control proponents.

When the topic turned to racial biases in policing, both Sanders and Clinton agreed there was systemic racism in the criminal justice system that needed to be taken seriously and fundamentally addressed. But the way that Clinton answered seemed to register more deeply with the debate audience, as it more personally acknowledged victimization in communities of color, whereas Sanders’ reply was a bit more cerebral.

“That requires a very clear agenda for retraining police officers, looking at ways to end racial profiling, finding more ways to bring the disparities that stalk our country into high relief,” she said. “One out of three African-American men may well end up going to prison. I want people here to think what we would be doing if it was one out of three white men.”

“Let me respond to what the secretary said,” Sanders said. “We have a criminal justice system which is broken. Who in America is satisfied that we have more people in jail than any other country on Earth, including China? Disproportionately African American and Latino. Who is satisfied that 51 percent of African American young people are either unemployed or underemployed? Who is satisfied that millions of people have police records for possessing marijuana when the CEO's of Wall Street companies who destroyed our economy have no police records?”

In further questioning, Sanders repeated his past statements that anyone killed by a police officer should trigger a federal Department of Justice investigation, that police officers must be held accountable for unnecessary violence, that police departments need to be de-militarized and that “we have to got to make our police departments look like the communities they serve.”

The next big area where they clashed was over the Affordable Care Act, better known as Obamacare. In recent days, Clinton has attacked Sanders on several fronts that relate to the health care reform. She has said that his proposals keep changing and would end up raising taxes for the middle-class to institute health care as a right. He’s countered, as he did on the debate stage, that she was distorting his position as a Medicare-for-all system would save people money because they would stop paying insurance premiums.

Stepping back from those specifics, the debate highlighted that Clinton would seek to fine-tune the law—which she defended as one of the Democratic Party’s most historic achievements—while Sanders would seek deeper and more fundamental change.

“Here’s what I believe, the Democratic Party and the U.S. worked since Harry Truman to get the Affordable Care Act passed,” she said. “We finally have a path to universal health care. We have accomplished so much already. I do not to want see the Republicans repeal it and I don’t to want see us start over again with a contentious debate. I want us to defend and build on the Affordable Care Act and improve it.”

Sanders began his comments by calling put her campaign for distorting his views.

“What her campaign was saying—Bernie Sanders, who has fought for universal health care for my entire life, he wants to end Medicare, end Medicaid, end the children’s health insurance program—that is nonsense,” he said. “What a Medicare-for-all program does is finally provide in this country health care for every man, woman and child as a right. Now, the truth is, that Frank Delano Roosevelt, Harry Truman, do you know what they believed in? They believed that health care should be available to all of our people.”

Clinton, for her part, doubled down on defending Obamacare and improving it.

“The fact is, we have the Affordable Care Act,” she said. “That is one of the greatest accomplishments of President Obama, of the Democratic Party and of our country … We started a system that had private health insurance. And even during the Affordable Care Act debate, there was an opportunity to vote for what was called the public option. In other words, people could buy in to Medicare and even when the Democrats were in charge of the Congress, we couldn't get the votes for that.”

“So, what I’m saying is really simple,” she summed up. “This has been the fight of the Democratic Party for decades. We have the Affordable Care Act. Let’s make it work.”

Sanders, however, countered that health care should not be brokered by private industry.

“I believe, that a Medicare-for-all, single-payer program will substantially lower the cost of healthcare for middle class families,” he said. “What we have got to acknowledge and I hope the Secretary does, is we are doing away with private health insurance premiums.”

Later in the debate, he said this would raise taxes—but end up costing households less.

Their final major area of disagreement was over Wall Street reform, where Sanders ran an ad last week that did not mention Clinton by name but talked about two Democratic visions, “One says it’s okay to take millions from big banks and tell them what to do,” whereas he has pledged to break up the largest financial industry monopolies.

When asked about that ad, Sanders stood by it, saying, “I don’t take money from big banks. I don’t get personal speaking fees from Goldman Sachs.”

Clinton responded by saying that Sanders was not just attacking him, but he was also attacking Obama—who “has led our country out of the Great Recession.” She said, “He’s criticized President Obama for taking donations from Wall Street … Senator Sanders called him weak, disappointing.”

As was the case with Obamacare, she positioned herself with the president and sought to win the crowd’s approval by demonstrating her loyalty to him.

“I personally believe that President Obama’s work to push through the Dodd-Frank bill and then to sign it was one of the most important regulatory schemes we’ve had since the 1930s,” she said. “So I’m going to defend Dodd-Frank and I’m going to defend President Obama for taking on Wall Street, taking on the financial industry and getting results.”

Sanders countered that unlike Clinton, he has not received hundreds of thousands of dollars in speaking fees from the large investment bank, Goldman Sachs and he would not allow them to have any influence in his administration.

“Let me give you an example of how corrupt—how corrupt this system is,” he said. “Goldman Sachs was recently fined $5 billion. Goldman Sachs has given this country two secretaries of treasury, one on the Republicans, one under Democrats. The leader of Goldman Sachs is a billionaire who comes to Congress and tells us we should cut Social Security, Medicare and Medicaid.”

“Secretary Clinton—and you’re not the only one, so I don’t mean to just point the finger at you, you’ve received more than $600,000 in speaking fees from Goldman Sachs in one year. I find it very strange that a major financial institution that pays $5 billion in fines for breaking the law, not one of their executives is prosecuted, while kids who smoke marijuana get a jail sentence.”

Clinton responded by saying that Sanders voted for a bill in 2000 that deregulated some of the riskiest financial markets, suggesting his stance was hypocritical. He replied by inviting “anyone who wants to check my record in taking on Wall Street.”