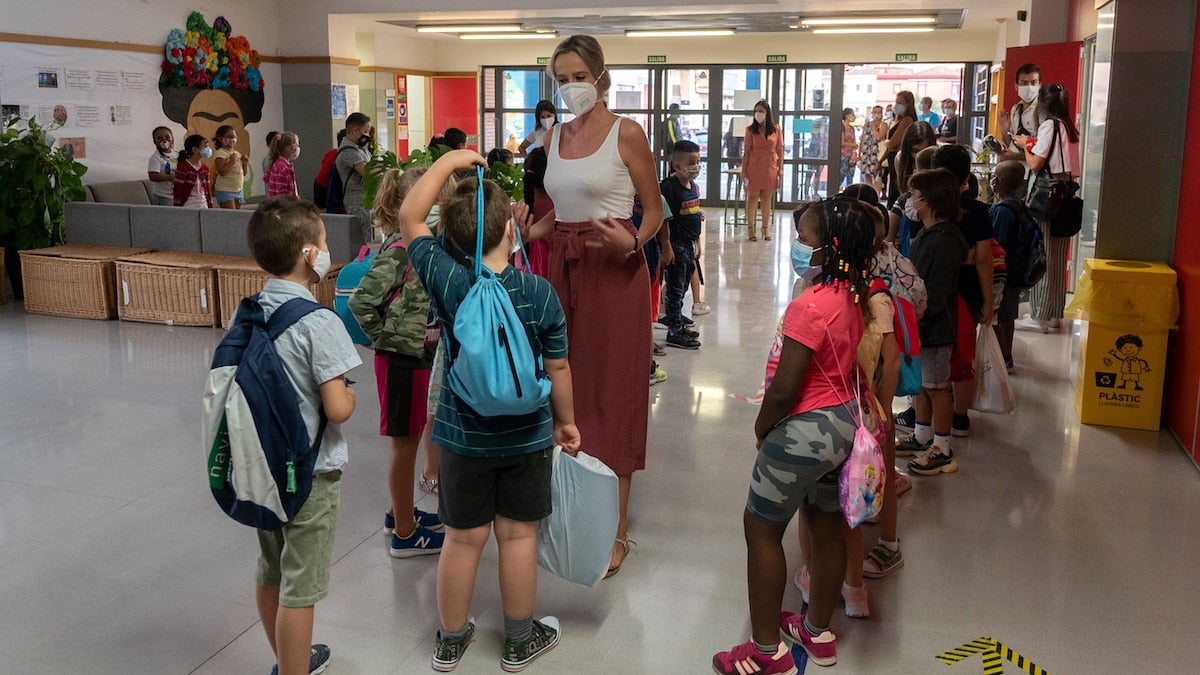 A teacher speaks to students arriving to a municipal school on the first day of classes for the new academic year in Valencia, Spain on Sept. 7, 2020 amid the coronavirus pandemic. JOSE JORDAN / AFP via Getty Images

Spain set a dubious record Monday when it became the first country in Western Europe to pass half a million coronavirus cases.

The Spanish Ministry of Health reported 525,549 cases Monday, up more than 26,000 from Friday’s confirmed caseload of 498,989, according to Reuters. The news came the same day as six regions in Spain were set to begin in-person schooling.

“They aren’t taking adequate measures,” 25-year-old Madrid resident Lux Marin told Reuters. “Look, people are walking around without face masks, the government is opening schools and that is not fair to children or to adults.”

Spain was one of the hardest hit European countries during the first wave of the pandemic, The New York Times pointed out, and it imposed strict lockdown measures in response. People were only allowed outside to walk their dogs or buy groceries. But, starting in July, the country reopened restaurants, bars, shops and beaches and welcomed international visitors. It restarted activities like nightlife and group gatherings faster than the rest of Europe, something that has contributed to the latest surge in cases.

Joan Ramon Villalbi of the Spanish Society for Public Health and Sanitary Administration told Reuters that the country emerged from lockdown before adequate test and trace measures were in place. He also blamed the country’s high population density, different rules in different Spanish regions and the difficult circumstances faced by low-wage workers.

“For these vulnerable workers, whether in agriculture, domestic service or in restaurants, you can tell them to stay at home for two weeks but it’s not clear they can afford that,” he told Reuters.

On the bright side, Spain’s resurging outbreak is so far less deadly than its first. The mortality rate for COVID-19 cases is now 6.6 percent compared to 12 percent in the spring, according to The New York Times.

The first outbreak struck Spain’s elderly population, and the country regularly reported daily death totals of more than 800 in March and April, according to Reuters. The resurgence is mostly impacting the young. The country reported eight deaths Monday, for a combined total of 29,516 since the pandemic started.

The new surge has also not put undue pressure on hospitals, but co-founder of Spain’s Institute for Health and Strategy Rafael Bengoa said the healthcare system could become overwhelmed in the future as patients develop complications from the virus.

“Many people will be infected, and some of these people, while they won’t die, will suffer an immediate and severe impact on their health that will likely be long-lasting,” he told Reuters.

Spain’s record comes as cases are rising across Western Europe, Axios pointed out.

France reported 8,975 new cases Friday, breaking the record it had set in March. The UK, meanwhile, reported 2,988 new cases Sunday, its highest daily total since May.

“People have relaxed too much, now is the time for us to re-engage, and to realise that this a continuing threat to us,” England’s deputy chief medical officer professor Jonathan Van Tam told BBC News Monday.