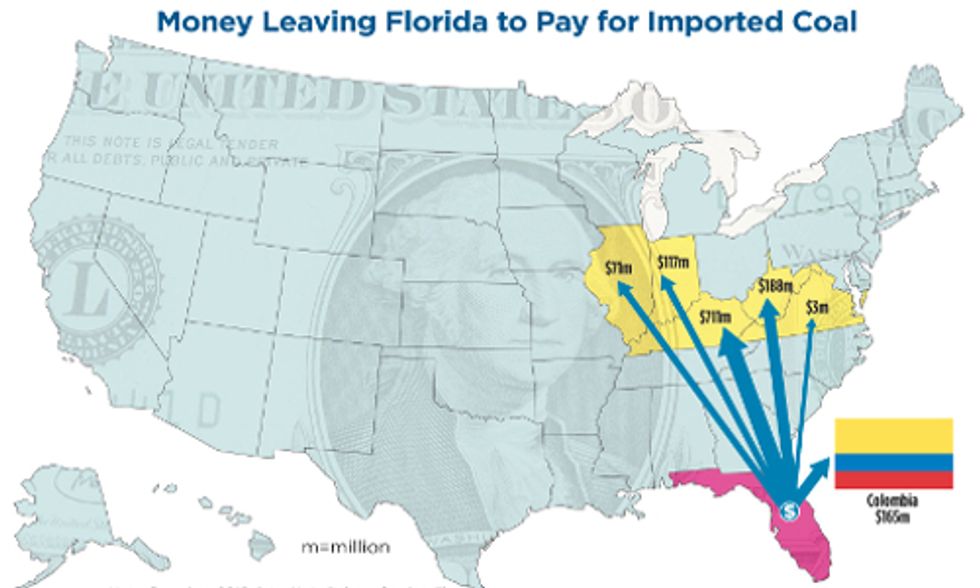 The cost of importing coal is a drain on the economies of Southeastern states, particularly in those states that rely heavily on coal-fired power. In an updated report, Burning Coal, Burning Cash the Union of Concerned Scientists use updated market data to determine just how much money is leaving the Southeast to pay for coal. In total, the following Southeastern states and their respective utilities spent $6.4 billion to import 93.5 million tons of coal into the region in 2012. We examine how much each of these states is spending to import coal and how these states could better use that money for in-state clean energy projects. Dollars leaving our states to buy coal are dollars that are no longer part of our local economy and are fueling a heavily polluting industry from cradle to grave.

Alabama relies heavily on coal-fired power, with 40 percent of the state’s energy in 2013 coming from coal. Despite many misconceptions, however, most of the coal burned in Alabama came from outside the state and cost a significant amount of money. In 2012, Alabama imported 18.5 million tons of coal from six U.S. states and Colombia, which accounted for 75 percent of the coal burned in Alabama coal plants. Due to this significant amount of imported coal, Alabama ranked eighth nationally for money spent on net coal imports and first in the nation for expenditures on international coal imports. The state’s largest power provider, Alabama Power, sent $710 million out of state to purchase coal and Alabama Power’s parent company, Southern Company, ranks first among all U.S. power providers for coal import dependency.

Energy efficiency is one of the quickest and most affordable ways to cut coal-fired power while boosting the local economy. Yet Alabama’s energy efficiency potential remains largely untapped. The state budgeted just $2.09 per person on ratepayer-funded electricity efficiency programs—101 times less than Alabama utilities spent on imported coal. Thanks to reductions in wind costs and recent advances in low-wind speed technology, several wind projects are underway in Alabama. Alabama Power purchased 404 megawatts (MW) of wind power from Kansas and Oklahoma in 2012. We are hopeful that Alabama Power will continue to increase investments in wind and solar power and decrease its reliance on dirty, coal-fired energy.

Although Tennessee has reduced its reliance on coal, it continued to rely on coal to provide almost half of its energy in 2013. More than 99 percent of the coal burned in Tennessee is imported from eight other states across the country. In 2012, the state spent a net total of $905 million to import 18.4 million tons of coal—making Tennessee the ninth highest state nationally in terms of coal import dependency. The Tennessee Valley Authority, which produces electricity for the vast majority Tennesseans, ranks third among U.S. power providers for coal import dependency, spending nearly $1.4 billion in 2012 on out-of-state coal across its holdings in Tennessee, Alabama and Kentucky.

Georgia relied on coal to provide around 39 percent of its energy in 2013. Power producers in Georgia paid nearly $1.7 billion to import 23.4 million tons of coal—primarily from Kentucky and Wyoming. Georgia ranks third highest in the nation for money spent on net coal imports. This high ranking is not surprising considering that Georgia Power, Georgia’s largest power provider, is also a subsidiary of the top-ranking importer, Southern Company.

Georgia is not in the top ranks, however, among states with significant energy efficiency savings—coming in forty-second in the nation with 0.11 percent savings in 2011. Although Georgia has a wealth of renewable energy resources like solar and wind, unfortunately only 2.3 percent of Georgia’s energy was generated by renewable resources in 2012. In its most recent Integrated Resource Plan (IRP), Georgia Power set out a plan to procure 735 MW of solar energy by 2016. We support Georgia Power’s recent commitments to retire coal plants as well as its investments in the clean energy economy; we look forward to the growth of renewable energy across the state.

Florida relied on coal-fired power for around 20 percent of its total energy in 2013. Like many Southern states, Florida has no in-state coal supplies. Although the tonnage of imported coal declined by 35 percent between 2008 and 2012, total coal expenditures only dropped 19 percent. This discrepancy is due to the fact that the average price paid for coal in Florida increased from $70.04 per ton to $88.16 per ton, which are among some of the highest prices in the U.S.

Power producers in Florida paid nearly $1.3 billion to import 14.5 million tons of coal from as far away as Colombia. Florida ranks fifth nationally for money spent on net coal imports and second for expenditures on international imports. Seminole Electric Cooperative sent $282 million out of Florida to purchase coal in 2012, more than any other electricity provider in the state. Four additional Florida utilities—JEA, TECO Energy, Gulf Power and Duke Energy—spent more than $100 million on out-of-state imports in 2012.

Florida’s major utilities are required to implement cost effective efficiency programs, but the annual goals last set in 2009 are not being fully achieved. The Florida Public Service Commission (PSC) is currently working with utilities to set new efficiency goals for 2015 and beyond. It is important that the PSC establish meaningful efficiency goals and ensure utilities develop and carry out strong plans for achieving them. Florida is beginning to develop its solar resources, with more 200 MW already installed, including Florida Power and Light’s 25-MW solar photovoltaic facility in DeSoto County. Still, Florida lags behind other leading solar states and lacks sufficient state-wide policies to catch up.

North Carolina is another state without its own coal supplies, and yet it relied on coal for around 41 percent of its in-state electricity generation in 2013. Power producers paid nearly $1.8 billion to import 18.7 million tons of coal to burn in their coal plants, which ranks North Carolina second in the nation for net coal import expenditures. Duke Energy, North Carolina’s largest utility, sent $1.7 billion out of state to purchase coal in 2012 and ranks second among all U.S. power providers for coal import dependency, spending more than $2.2 billion on out-of-state coal across its holdings in six states. Although the total tonnage of imported coal declined by 36 percent since 2008, total coal expenditures dropped only 25 percent as the average price for coal in North Carolina increased from $79.85 per ton to $93.74 per ton.

Not only does coal cost our Southeastern states a lot of money, burning coal for electricity also threatens our health on a daily basis. Most recently, a toxic chemical used to process coal leaked from a tank at a Charleston, WV coal plant into the Elk River—resulting in a water ban in nine counties that affects 300,000 residents and causing the governor to declare a state of emergency. This is just the most recent example of one of the myriad dangers communities are exposed to by reliance on coal-fired power. It is time for Southeastern utilities to divest from coal and invest in a clean energy economy.