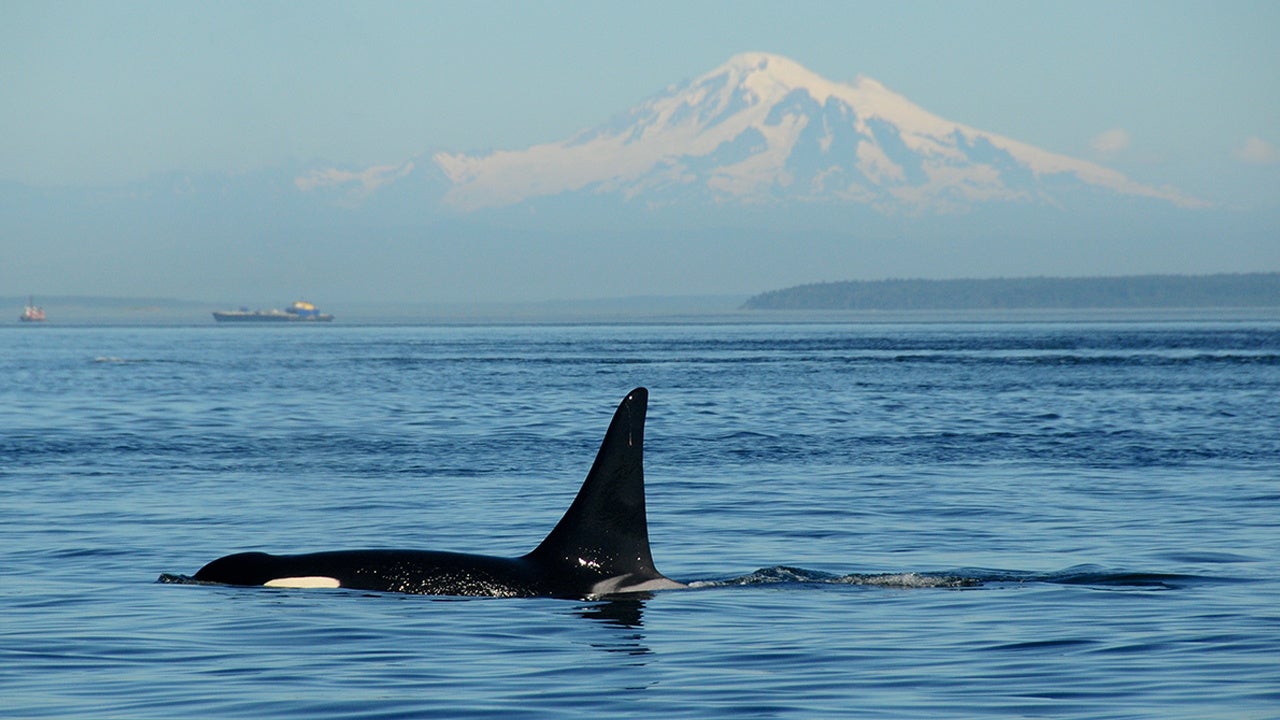 Pacific Northwest orca with Mount Baker in the background near the Strait of Georgia off the coast of Vancouver, British Columbia. Sergio Amiti / Moment / Getty Images

The extremely endangered population of Southern Resident killer whales off the coast of Washington and British Columbia fell to 73 after 3 orcas went missing, the Center for Whale Research said in a statement.

The Washington state-based research center takes an annual survey of the killer whale population from the extremely endangered pods that once frequented the Salish Sea in southwestern Canada and northwestern Washington daily in the summer months. Now, the declining Chinook salmon stocks means the whales are rarely seen and are starving to death, as CNN reported.

But a lack of Chinook salmon means they are rarely seen in those waters anymore.

“They aren’t getting their prey, and that’s the problem,” said Michael Weiss, a field biologist with the Center for Whale Research, to CNN. Weiss said this problem started in the 90s when the population was around 100 whales, but it has been in a steady decline ever since.

“It is right inline with the trajectory that has been predicted for several years,” said Howard Garrett, co-founder and board president of Orca Network on Whidbey Island, Washington, as the Global News in Canada reported. “It’s very, very sad. These are known individuals. People care about them, we’ve gotten to know them over many, many years and we know their family lines … and now we’ll see them never again.”

The Southern Resident orca population is a large extended family comprising three pods named J, K and L. The three missing orcas are J17, K25 and L84. In the summer, the whales should visit the Puget Sound, the Georgia Strait and the inland reach of the Strait of Juan de Fuca.

However, it has been more than a month since the J and K pods were spotted in their summer waters. L pod has not been seen in the inland Salish Sea at all, according to the Seattle Times. Instead, the whales have stayed on the outer coast all summer.

“I predicted we would be in this fix,” said Ken Balcomb, founding director of the Center for Whale Research, as the Seattle Times reported. “Until we solve this food issue, we will keep going through this trauma, getting all excited when there is a baby and all upset when there is a death. We have to take care of the food problem.”

In January, the Center for Whale Research warned that J17 looked emaciated with a misshapen head and neck that were symptomatic of starvation, according to the Global News.

J17 was a 42-year-old matriarch in the pod who left behind two daughters and a son, J35, J53, and J44, respectively. Her daughter, J35, or Tahlequah, made headlines last summer when she carried her dead baby calf around the sea for an unprecedented 17 days, according to the Center for Whale Research. She has now lost her own baby and her mother.

Her death is particularly alarming since it puts her family at risk. Older female Southern Resident whales help feed their families. Sons are up to eight times more likely to die within a year if they lose their mothers, as the Seattle Times reported.

The center also reported that K25, a 28-year-old adult male in his prime, was not in good body condition last winter. He is survived by two sisters and a brother, K20, K27, and K34, respectively.

The third missing what is L84, a 29-year-old male who was the last of a surviving member in a matriline line of 11 whales.