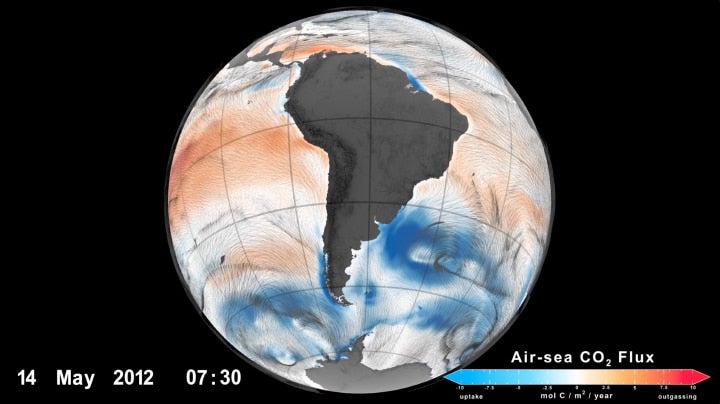 An image showing where the ocean emitted (in red) and absorbed (in blue) carbon dioxide in 2012. Photo credit: NASA

The Southern Ocean, the body of water that circles Antarctica, is an important carbon sink.

That’s the finding of a new NASA-supported study published in Science in December of 2020, which used aircraft observations of atmospheric carbon dioxide to conclude that the ocean below 45 degrees South absorbs around 0.53 more petagrams (530 million metric tons) of carbon than it emits into the atmosphere every year.

“Airborne measurements show a drawdown of carbon dioxide in the lower atmosphere over the Southern Ocean surface in summer, indicating carbon uptake by the ocean,” study lead author and National Center for Atmospheric Research (NCAR) scientist Matthew Long said in a statement published by NASA.

The amount of carbon dioxide in the atmosphere is rising due to human activities like industrial agriculture and the burning of fossil fuels, raising global temperatures along with it. However, some of that carbon dioxide is absorbed by plants and by the ocean in so-called carbon sinks. Understanding where these sinks are, how big they are and how they are changing is essential for predicting the future impacts of the climate crisis and assessing the effectiveness of attempts to mitigate it, the National Science Foundation (NSF) explained.

The Southern Ocean has been a difficult piece to fit into this puzzle.

“Understanding ocean-atmospheric carbon dioxide (CO2) fluxes in the Southern Ocean is necessary for quantifying the global CO2 budget, but measurements in the harsh conditions there make collecting good data difficult, so a quantitative picture still is out of reach,” the study authors wrote.

Previous research had indicated that the frigid waters might be less of a carbon sink than previously thought, according to NSF, but the new study used atmospheric measurements that affirmed the ocean’s status as an important carbon sink. In the past, researchers had focused on measuring the acidity of the Southern Ocean, which increases with carbon dioxide, NASA explained. The new research focused on the atmosphere above the ocean instead. It was gathered during three field experiments between 2009 and 2018.

“You can’t fool the atmosphere,” Long said in a statement reported by NASA. “While measurements taken from the ocean surface and from land are important, they are too sparse to provide a reliable picture of air-sea carbon flux. The atmosphere, however, can integrate fluxes over large expanses.”

Computer models indicate that 40 percent of all of the anthropogenic carbon dioxide in the world’s oceans was originally drawn down by the Southern Ocean, which means it is one of the Earth’s most important carbon sinks.