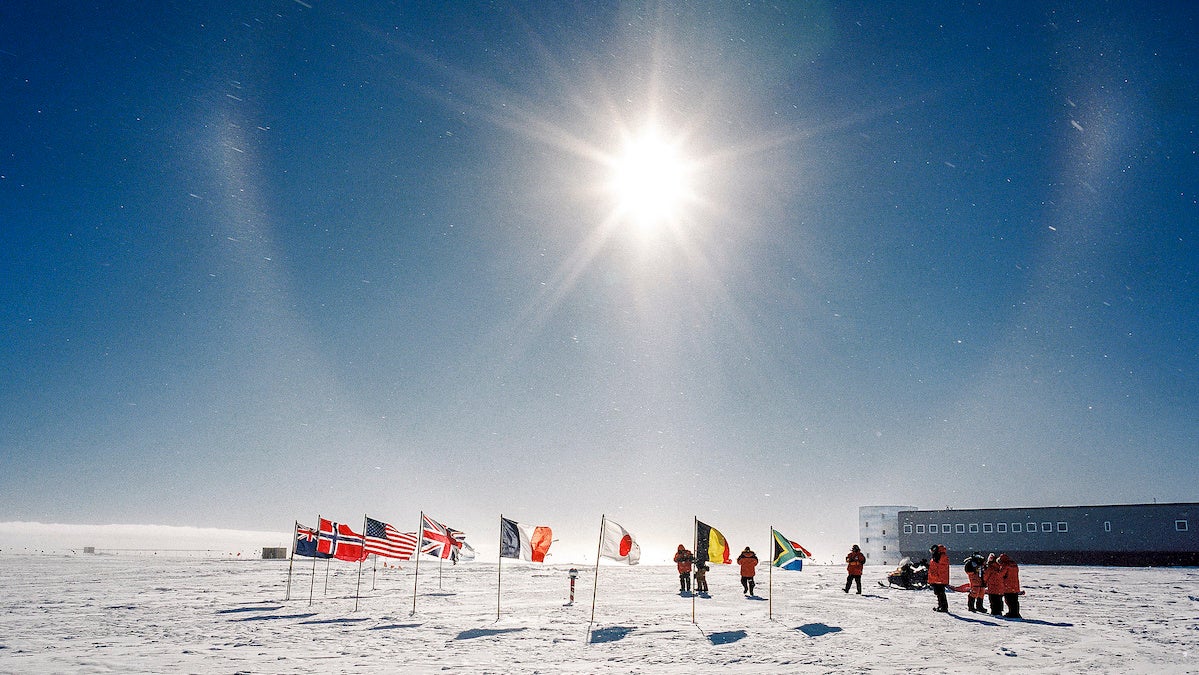 The Amundsen–Scott South Pole Station, where the temperature readings informing the study were taken. Christopher Michel / CC BY 2.0

This year’s record-breaking heat wave in Siberia has drawn attention to the fact that the climate crisis is warming the Arctic about twice as fast as the mid latitudes. But things are also heating up on the other side of Earth.

The South Pole — the most remote place on Earth — has heated more than three times faster than the global average over the last 30 years, a study published in Nature Climate Change Monday found.

“[It’s] the ultimate canary in the coal mine,” University of Colorado researcher Sharon E. Stammerjohn, who was not involved with the study but wrote a commentary on it, told The New York Times. “One that we can no longer ignore.”

Research led by #VicUniWgtn’s Dr Kyle Clem with a team including @CubaRaglanGuy shows the South Pole is warming more than three times faster than the rest of the world https://t.co/627yhDlG1K pic.twitter.com/cbvNQ6ueH0

The researchers looked at 60 years of data from the South Pole and found that its average temperature had risen by more than 1.83 Celsius degrees since 1989, AFP reported. The pole is now warming at a rate of about 0.6 degrees Celsius per decade, compared with the global average of around 0.2 degrees Celsius.

“While temperatures were known to be warming across West Antarctica and the Antarctic Peninsula during the 20th century, the South Pole was cooling,” lead study author and Victoria University of Wellington researcher Kyle Clem told AFP. “It was suspected that this part of Antarctica … might be immune to/isolated from warming. We found this is not the case any more.”

The warming can partly be explained by natural climate cycles. The warming trend at the South Pole began as sea-surface temperatures in the western tropical Pacific also rose as part of an oscillation with decades-long intervals. This tropical warming ultimately warmed the South Pole too, as The New York Times explained:

The warming ocean heated the air, which caused ripples of high and low pressure in the atmosphere that reached all the way to the Antarctic Peninsula, more than 5,000 miles away. Scientists call these kinds of long-distance links teleconnections.

Coupled with the stronger westerly winds, which are part of another long-term pattern, the ripples led to stronger storms in the Weddell Sea, east of the peninsula. These rotating, or cyclonic, storms, swept warmer air from the South Atlantic Ocean into the interior of the continent.

However, while the rapid South Pole warming could all be explained by natural variability, Clem said it was unlikely that it would have warmed so much without the burning of fossil fuels.

The researchers ran more than 200 climate models based on greenhouse gas concentrations recorded from 1989 to 2018 and found that these emissions likely caused one degree of the 1.8 degrees of warming recorded at the South Pole, Clem wrote for The Guardian. The researchers then ran models to see what 30-year temperature swings in the region would look like without greenhouse gas emissions and found that the warming they had detected was too much for 99.9 percent of them.

“It appears the effects from tropical variability have worked together with increasing greenhouse gases, and the end result is one of the strongest warming trends on the planet,” Clem wrote.