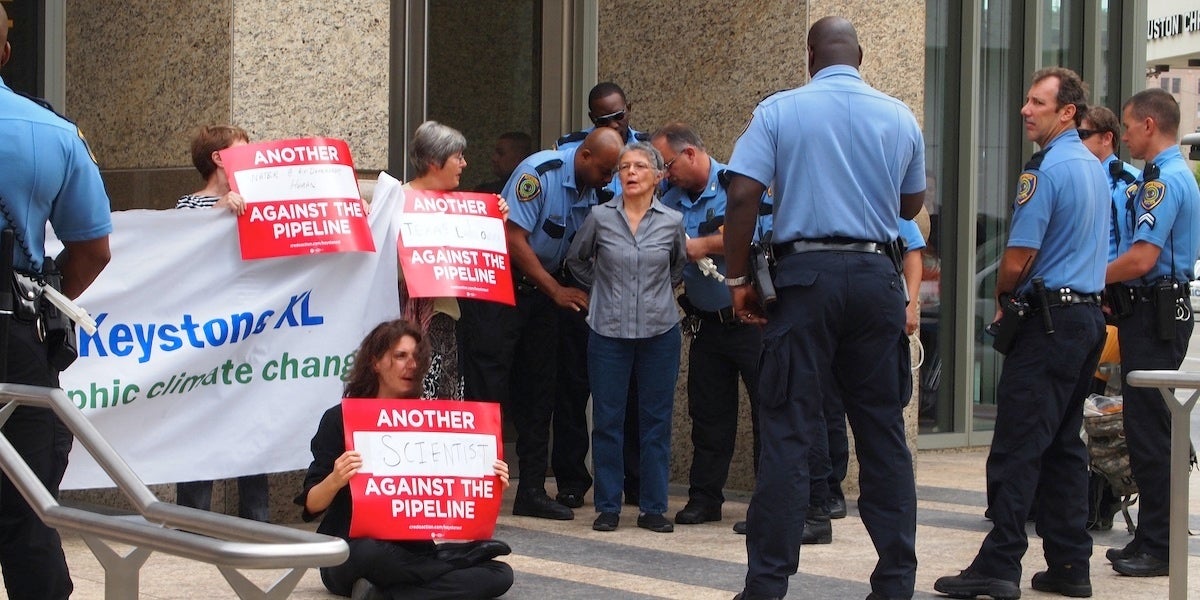 Last month, the Butte County Commission in South Dakota approved an agreement to use Faulk County jails for $85 per day per detainee, should the demonstrations go ahead and if protestors are arrested. Faulk County is roughly 270 miles east of Butte County.

The KXL’s planned route will cross through the northeastern corner of Butte County.

“The only reason we did it was kind of an insurance thing,” Butte County Commissioner Stan Harms said Monday, as quoted by the Rapid City Journal. “We don’t have a jail in Butte County. We normally use Sturgis, and if we can’t get in there, the overflow goes to Deadwood or Rapid City. Now, we have Faulk County in case everything is full up.”

The arrangement was made even though a federal judge blocked construction of the long-gestating project in November.

Despite the judge’s orders, TransCanada plans to start construction on the $8 million tube this year, according to the
AP. The developer remains “committed” to building the 1,179-mile pipeline designed to carry 830,000 barrels a day of tar sands oil from Alberta to Nebraska.

The KXL has been at the center of a contentious fight for a decade. Pipeline opponents and indigenous peoples worry that its path would cross drinking water sources and treaty territories.

President Obama rejected the pipeline in 2015 partly due to concerns about its contribution to
climate change, but President Trump reversed the decision shortly after taking office.

But in November, Judge Brian Morris of the U.S. District Court in Montana temporarily halted the project and ruled that the State Department needed to write a supplement to the 2014 environmental impact statement that the Trump administration relied on to approve the pipeline. The new statement must take into account the risks posed by the project:
oil spills, damage to indigenous resources and climate change.

Trump called Morris’ ruling a “disgrace” and suggested that his administration intends to appeal, CNN reported.

“It’s a political decision made by a judge. I think it’s a disgrace. 48,000 jobs, I approved it, it’s ready to start,” he told reporters.

The
Guardian reported in September that law enforcement officials are anticipating possible Standing Rock-style protests against the KXL, citing documents from the American Civil Liberties Union (ACLU) and ACLU of Montana.

The ACLU obtained a report showing that state and federal agencies may be spying on potential protesters and characterized pipeline opponents as “extremists” intent on “criminal disruptions and violent incidents” and warned of potential “terrorism.”